When Michael Phelps was 7, he was scared to put his head under water. Then he became the greatest swimmer ever.

Boomer Phelps is not even seven months old (he was born in July), and he's already submerging. With the help of the woman who taught Phelps to swim. In the city where Phelps grew up. Good luck, 2036 Olympic field!

Michael Phelps shared video of Boomer, aka Boom-Boom, on Facebook Live on Monday from Meadowbrook Aquatic and Fitness Center in Baltimore, where he and his wife, Nicole, were giving their baby his second in-pool lesson.

Boomer can't swim ... yet. When he went under water Monday, he threw a bit of a fit. When Papa Phelps held him, Boomer grabbed for whatever he could keep him above the pool's depths — in this case, his father's beard and armpit hairs.

He'll get there, though. He was getting lessons from Cathy Bennett, Michael Phelps' first swim instructor and the director of the Michael Phelps Swim School. Boomer's not too early to take to the water, either. According to the American Association of Pediatrics, children ages 1 to 4 can benefit from formal swimming instruction.

"Today was very good, very successful," Phelps said. "The process has started where he gets to become more water-safe and relaxed, comfortable in the water."

Until then, we'll probably see Boomer taking all of the baby modeling gigs that former Terp and Raven Torrey Smith's son has moved on from. 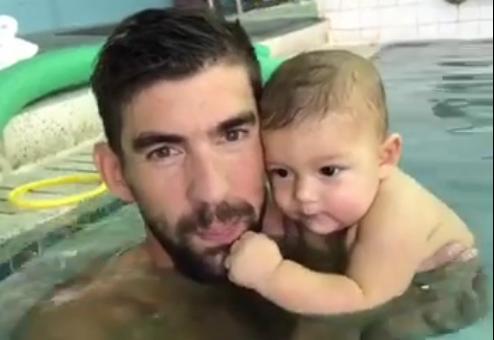