This October, Baltimore Homecoming’s second annual Homecoming Hero Awards, sponsored by T. Rowe Price, will recognize five Baltimore heroes — community and non-profit leaders, activists, artists or other innovators — who have made a significant impact on our city over the past few years.

Voting has ended. Winners will be announced October 14. All 10 semi-finalists will be invited to share their stories at the Homecoming event and participate in T. Rowe Price Foundation's capacity building program. The five winners will have a speaking opportunity on stage at the Homecoming and will receive a cash award of $3,000 each.

Born in Argentina, Leonor taught Latin American history & politics at Notre Dame of Maryland University for 30 years, and wanted to give back after retiring in 2012. Leonor founded ¡Adelante Latina!, a free, after-school college prep program for academically promising, low-income Latinas in BCPS. This year, ¡Adelante Latina! graduated its fourth cohort of 8 students, all of whom will be attending college this fall with full scholarships. Now in its seventh year, the program serves 34 students and has graduated 4 cohorts with most of their graduates currently enrolled in college. www.adelantelatinabaltimore.org

Van Brooks began Safe Alternative Foundation for Education (SAFE) in 2012 to help students achieve academic success by integrating key academic subjects with real world applications. Van was paralyzed by a football injury in 2004 and developed SAFE when he realized his desire to provide “a program for middle school students that would go far deeper than most after school programs and actually change the trajectory of students’ lives.” www.safealternative.org

Kayenecha is an arts professional with almost 20 years of experience in experiential events and connecting artists & brands. She founded Creative Nomads, an organization that is committed to providing access to arts, music, and culture to youth and families throughout Baltimore including a program called Drumming With Dad which has been successful in providing education, parent engagement and community with the African drum as a learning tool. www.thecreativenomads.org

Blair is a long-time activist for black LGBTQ youth in Baltimore. Blair worked at STAR TRACK at UMB where he led a dynamic team of leaders to connect services to LGBTQ youth. STAR TRACK has since cultivated a pipeline of leaders positioned to give back to their communities. Now as executive director of Baltimore's only youth homelessness drop-in center, the Youth Empowered Society, he is transforming the organization into a national model for peer-led, youth-led, life-changing services. www.yesdropincenter.org

With co-founder Archie Lee, Marlo established FACE, “Freedom Advocates Celebrating Ex-Offenders,” a nonprofit transitional housing program for men coming out of prison and out of drug abuse while making plans to expand their much-needed efforts. They purchased a house in northeast Baltimore that, over the years, has housed hundreds of men on their way from prison to the next stage of life with plans to take their operation to Sandtown-Winchester in West Baltimore. www.facebaltimore.org 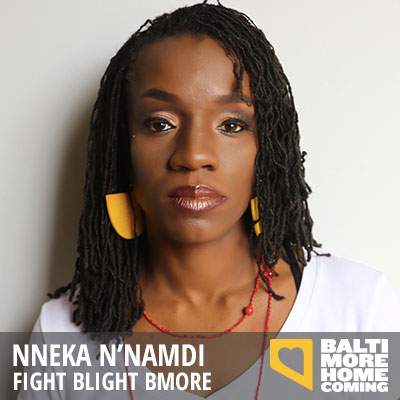 Nneka is a Baltimore-based entrepreneur engaged in conscious capitalism and community wellness work. With over 15 years of technical experience Nneka has a diverse body of knowledge and capabilities which include various areas of the software development life cycle, community arts and wellness program development. She is the founder of Fight Blight Bmore, an economic, environmental, and social justice initiative led by the community and informed by data to address the issue of blight. www.fightblightbmore.com

Shantell is a Social Entrepreneur and Advocate for Maternal & Child Health. After suffering the untimely death of her one year old daughter, she founded Touching Young Lives, Inc. a nonprofit organization that focuses on the health and well-being of infants and children by providing best practice childcare education and essential tools for safe infant sleeping spaces. Since its formation, Shantell has provided over 8,000 portable alternative cribs to families in Baltimore city and Maryland, with one goal in mind: preventing another untimely child death. www.touchingyounglives.com

Ana has been a doula for 12 years, and describes witnessing her first childbirth as a magical and life-changing experience. Ana felt helpless at times as a new mom in the neonatal intensive care unit too tired and preoccupied to communicate her needs. She realized exactly how much both emotional and physical support she needed while caring for a newborn with special medical needs. Ana founded MOMCares, a postpartum doula program designed to support mothers of color in the NICU by providing packaged meals, transportation, bedside support and childcare for older siblings. www.therisingmomcares.com

Also the co-founder of Baltimore United for Change, Jamye launched CLLCTIVLY in 2019, an organization that seeks to create an ecosystem to foster collaboration between Black-led organizations in Baltimore. The goal is to mitigate fragmentation and duplication of programs by providing a resource that seeks to find, fund and partner with black social change organizations. The organization also offers no-strings-attached micro-grants of $1,000. www.cllctivly.org

Baltimore Homecoming aims to inspire Baltimore alumni — anyone who was born, grew up, lived or worked in Baltimore — to reconnect with the city and join it in building a brighter future. Through the Homecoming program, it will introduce out-of-town guests to the city's leading innovators, artists, activists and community leaders.

In addition to naming a new class of Homecoming Heroes, this year’s event will give 2018’s winners an opportunity to update Baltimore alumni on the work they’ve been doing.

Here’s how it will work:

» NOMINATE:​ From May 30 through July 7, the public nominated Homecoming Heroes. Anybody who does their transformational work in Baltimore was eligible, but Baltimore Homecoming was looking in particular for individuals who have made a significant contribution to the city through their activism, the arts, or community work; through a faith-based organization; or through nonprofit leadership. Baltimore Homecoming’s Host Committee narrowed down the pool of nominations to 10 semi-finalists. Below you’ll find more detail on the selection criteria.

» VOTE: You can vote on your top five Heroes. The voting will be open through Aug. 15. All 10 semi-finalists will be invited to participate and share their stories at the Homecoming event and participate in T. Rowe Price Foundation's capacity building program. The five winners will have a speaking opportunity on stage at the Homecoming and will receive a cash award of $3,000 each.

» TUNE IN:​ Baltimore Homecoming will announce the five winners prior to the Homecoming on Oct. 14. To keep it a surprise, we’ll keep vote tallies secret until the announcement.

Baltimore Homecoming is looking for community leaders, activists, artists, leaders of small or start-up nonprofit organizations, small-business owners, and other innovators. That said, anybody 18 years of age or older who has demonstrated commitment to social change and community engagement on behalf of those living in Baltimore is eligible.

What are the selection criteria?

Baltimore Homecoming’s Host Committee will review nominations and select 10 finalists on the basis of three factors, which will be weighted equally:

» Impact​: What challenge(s) has the nominee sought to address? What progress have they made? Have they transformed the lives of individuals? Touched the lives of many?

» Inspiration and mobilization​: Did the nominee inspire others to take action? Did they work to organize others within their neighborhood or across Baltimore as a whole?

» Creativity​: Did the nominee’s work break new ground or create a new model for change?

What are the awards?

Winners can choose to receive their $3,000 cash prize an unrestricted individual gift or to donate to a non-profit organization or charity of their choice.

In addition to the cash prize, the 2019 Homecoming Hero award winners will have the opportunity to raise the profile of their work and organization through participation in speaking events, conference and programs throughout the region. At these varied events, Homecoming Heroes will share Baltimore's powerful stories of change and renewal with a broader regional and national audience.

The Homecoming Heroes will also have the opportunity to participate in the T. Rowe Price Foundation’s capacity building program and become part of a cohort that meets several times a year with a focus on specific challenges and use capacity-building and leadership development resources.

Will there be awards for semi-finalists?

All 10 semi-finalists will be given a chance to participate and share their story at the Homecoming event Oct.16-18 and will also have the opportunity to partake in the T. Rowe Price Foundation’s capacity building program and become part of a cohort that meets several times a year with a focus on specific challenges and use capacity-building and leadership development resources.

How will winners be selected? What’s the timeline?

Why can’t I see the voting results?

To save the excitement for the reveal!

What if my question isn’t answered here?

Email info@baltimorehomecoming.com and organizers will do their best to help.