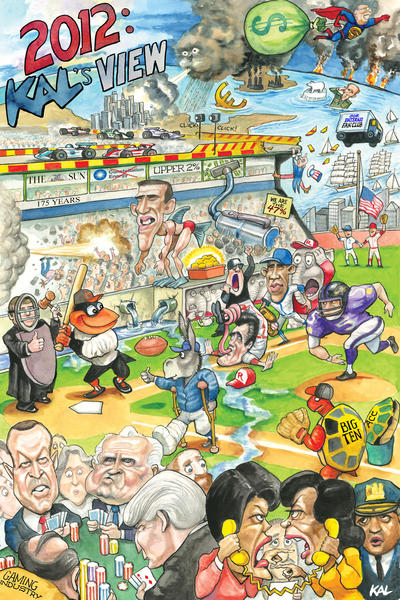 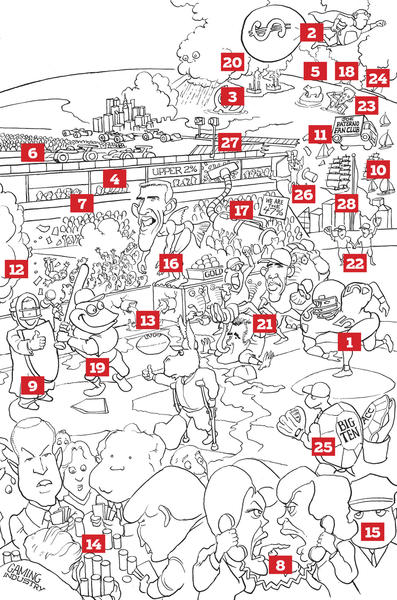 1. A dropped pass and a missed field goal keep Joe Flacco and the Ravens out of the Super Bowl.

3. Riots in Athens kick off a year of public unrest over the European debt crisis.

5. United Nations efforts to stop the civil war in Syria fail, with a shaky cease-fire giving way to fiercer bloodshed.

6. Michael Andretti and local investors take over the beleaguered just three months before it is scheduled to take place.

8. Baltimore Comptroller Joan Pratt questions the purchase of new, high-tech phones by Mayor 's administration, a dispute that devolves into a lawsuit.

9. U.S. Chief Justice provides the deciding vote to uphold the most controversial element of , the individual mandate.

10. Dozens of tall ships crowd Baltimore's harbor for Sailabration, the kick-off of the city's commemoration of the War of 1812.

12. A derecho blows through the Baltimore region, leaving hundreds of thousands without power for days during a heat wave.

13. A water main break in downtown Baltimore shuts down Light Street for days.

16. Baltimore's becomes the most decorated Olympian of all time, winning two silver medals and four gold in the London Olympics.

17. Mother Jones Magazine publishes a video of disparaging 47 percent of the population as lazy and dependent. President meanwhile insists that taxes be raised on the top 2 percent of earners.

18. An attack on the U.S. consulate in Benghazi, Libya, kills four Americans.

19. The Orioles host the first playoff game at in 15 years.

20. pounds New York and New Jersey. and others point to that storm and others as proof that we need to tackle climate change.

23. Director resigns after an investigation uncovers his affair with his biographer.

24. Palestinian terrorists launch rockets at Israeli cities, and Israel responds with an air offensive against targets in Gaza.

25. The University of Maryland ditches its decades-old association with the for greener (in the fiscal sense, anyway) pastures in the Big Ten.

26. President Obama and careen toward the — a combination of mandatory tax increases and spending cuts.

27. After a series of articles detailing problems with Baltimore City's speed camera program, The Sun reports on the case of a man who got a ticket while stopped at a red light.

28. A gunman, after killing his mother, enters in Newtown, Conn., and kills 26 more people — including 20 children — plunging the country into mourning and leading to a national call for stricter gun laws.