As freezing temperatures forced several Baltimore schools to close to start 2018, city and state officials immediately began hurling heated words about who was to blame for broken boilers and burst pipes.

This is a ‘horrendous crisis’ caused by ‘ineptness and mismanagement.’

The Republican governor, who faces reelection this year, has a point. Since 2009 the city has returned $66 million in state funds because projects were not ready to advance.

City officials blamed a state funding process that dribbled out money for individual projects over several years, forcing them to wait to begin projects until funds were available or forego earmarked money because project costs had risen.

The Baltimore County school system, in comparison, gets county government money to start projects, knowing the state will reimburse the district in subsequent years.

Decades of under-investment in city school facilities are to blame. 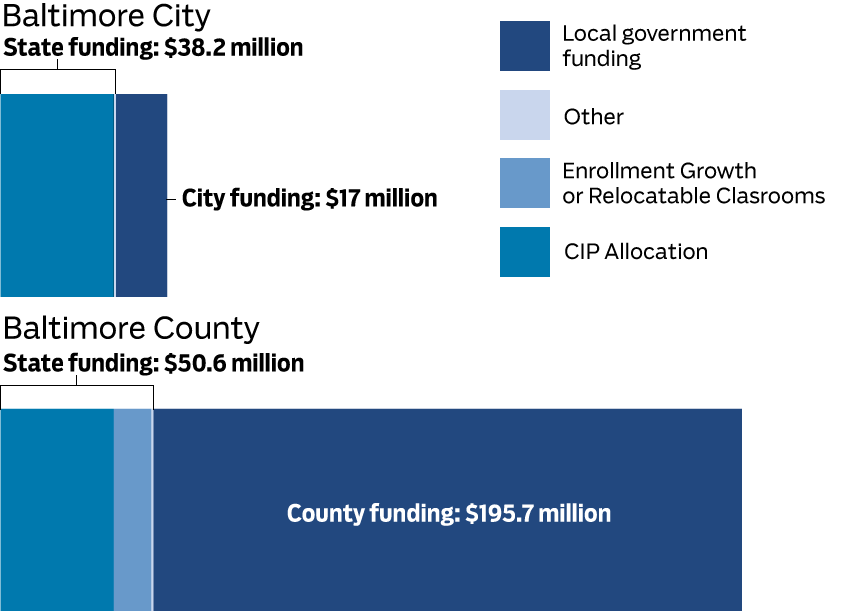 That allows the county schools to pay the designers, planners and construction firms that help the school officials meet the state’s deadlines and start its projects sooner.

The state gives county schools more money, in part, because the district is growing as the city system shrinks.

Of the $50.6 million the state allocates to Baltimore County schools, $13 million derives from a pot that considers enrollment growth and the need for trailers that double as classrooms.

The city received nothing.

The impact is clear. Between August and October last year, the city school system was forced to rescind 51 capital projects due to the state funding process, officials said. Four of those projects were started last year, 22 began in 2016, and 27 originated between 2013 and 2015.

And for fiscal years 2016 and 2017 the city asked to rescind $29.8 million in projects at 15 schools. The reason: “changing market conditions and challenges with lag time between the developed cost estimates and final allocation of funds," according to minutes of the Interagency Committee on School Construction’s June 14 meeting.

But while that supports the city’s complaint, other project deferral data buttresses Hogan’s issues.

Furley Elementary School, which was closed Jan. 9, has been slated to receive a new roof, including boiler and heater stacks and vents.

The estimate cost last year: $3.5 million. The project was deferred “pending submission of a structural engineering report and determination of complete project scope.”

And the state’s Interagency Committee on School Construction last year deferred support for a $6.9 million project to replace Curtis Bay Elementary Middle School’s heating and ventilation system, which dates to 1969.

The reason? “Concern regarding the [city school system’s] capacity to carry out a large number of HVAC projects,” according to state documents.

Another complexity: the city has too many buildings for its shrinking number of students, which has led to closures and mergers. While it struggles to keep up with maintenance at aging buildings, the city school system is in the middle of a $1 billion state-funded initiative to build up to 28 new buildings.

And while the city’s complaint about the state funding process has been valid for years, school officials can no longer lean on that reason.

“We have discontinued the practice of partially funding systemic projects within a fiscal year for Baltimore City,” according to a Dec. 12 letter that Robert Gorrell, executive director of the Maryland Public School Construction Program, wrote to the schools CEO Sonja B. Santelises.

Even so, Gorrell also said the city only raised the complaint in late 2016 “during preparation of recommendations for the FY2018 Capital Improvement Program.”

The project at Furley is now moving forward.

Still, local school systems across Maryland never get all the funding they request, including at some of the schools that were forced to close last week.

Project: Replace all 3,100 square feet of windows and 28 exterior doors installed in 1969.

Funding: Deferred “due to fiscal constraints.”

In 2017, Baltimore County’s full pipeline of money fueled a fast paced construction program. The county built or started construction on four new elementary schools, supplied air-conditioning to nine schools, and started major renovations on two other schools. They requested money for 27 projects, 18 were approved in partial or full funding.