It’s a common view that state troopers and police officers won't give you a speeding ticket as long as you don't go more than 10 mph over the speed limit. But figures compiled by the District Court of Maryland tell a different story — or seem to.

Statewide, 26 percent of all officer-issued speeding citations (as opposed to the automated speed camera variety) went to drivers clocked going 1 to 9 mph over the limit, according to the data from the 2011 fiscal year. About 70,000 of the 272,000 tickets fell in that range. (These are separate from the $40 automated speed camera tickets, which are triggered when a motorist exceeds the speed limit by at least 12 mph.)

In 2008, Sun reporter Michael Dresser found that in some Maryland jurisdictions, officers routinely gave "on-the-street discounts" by writing tickets for speeds lower than those clocked by radar guns. Other departments discouraged the practice.

Sgt. Marc Black, a spokesman, said the numbers don't surprise him. Troopers are trained that “if we see a violation, then we are supposed to act upon that violation,” he said.

So no 10 mph cushion? "I think that's a fallacy put out there," he said, "and unfortunately some of these people found it may not be so."

And while it's true the penalty is lighter for less egregious speeders — $80 and one driver's license point for going less than 10 mph over, but $90 and two points for going 10 to 19 mph over (and $160 if the speed limit is 65 mph) — Black said troopers don't have latitude to discount the listed speed to be nice. 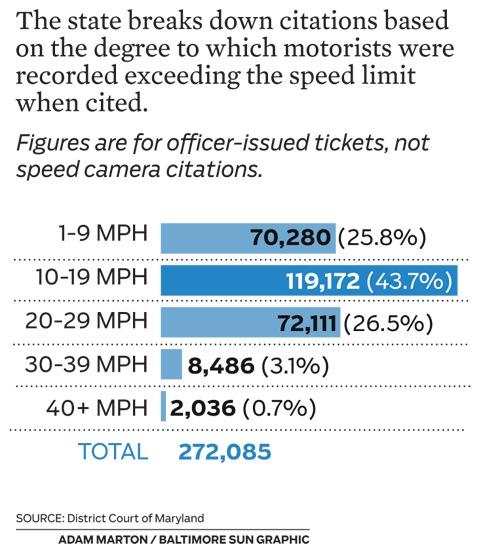