If you're worried about auto theft, parking in the Cedarcroft neighborhood in February might be the safest spot in the entire city -- but be wary if you need to park in the Frankford neighborhood in July.

In any large city, auto theft is a persistent problem, and in Baltimore, nearly 4,000 vehicles are stolen each year. According to the recovery systems producer LoJack, Maryland ranks 7th in the nation in vehicle thefts, and certain trends become more apparent in the city's crime data.

The top five neighborhoods for auto thefts cover a wide swath of the city, from Frankford in the northeast to Brooklyn in the south to Sandtown-Winchester in the west. Each had at least 300 thefts over the past five years. (One cautionary note: The neighborhoods have uneven sizes and populations, so comparisons are imprecise.) For overall crime for the city, these neighborhoods are in the upper range, but they do not also in the top five. In fact, Patterson Park ranked16th for total crime, but fifth in auto theft.

According to the National Insurance Crime Bureau (NICB), the majority of thieves target cars either for the total value of the car or to strip the car of parts.

"One of the things that makes California a hot spot for auto thefts is the supply of cars and the proximity to ports," said Carol Kaplan, the director of public affairs for the NICB.

She said some stolen cars, in particular newer, more expensive ones, are sent via cargo containers to other countries, where they are then resold. East Coast ports are not immune. In 2003, for example, Baltimore-area authorities recovered two shipments of stolen luxury cars and sport utility vehicles from an international ring that was operating through the city's port.

For several years, the Honda Accord has held the top spot for number of thefts, and it is one of the most common cars in America. Iin fact, the top three most stolen cars and most common used cars are the same: Honda Accord, Honda Civic and Ford F-150.

"In most cases, they're being used by someone who needs a car or they are stripped of parts," Kaplan said.

That's why these three models top both lists; the demand for parts and the supply of cars needing parts means that parts for those models are stolen more than others.

For example, an older model needs more maintenance as time passes, but the manufacture of certain parts might have ended. Thus, compatible parts are stolen to meet the demand. Likewise, the legitimate supply of parts might not meet overall demand, creating a market for stolen goods.

Kaplan suggests that an increase of newer cars can lead to a decrease in auto theft, because theft prevention systems tend to improve over time. Additionally, she says a stable economy cans keep crime low overall, and more efficient law enforcement tactics can be used to catch thieves.

Baltimore police say city drivers have a tendency to leave cars running outside convenience stores, especially in winter. Some also double park and leave their car engines on while they run into rowhouses on streets where there is no available parking. That's a common problem nationally, as well.

Police say that nearly 19 percent of vehicles stolen this year in Baltimore had keys inside. That's 358 of the 1,933 vehicles reported stolen. But that rose to 50 percent in some areas of the city last winter.

As a trend, auto thefts in the city drop leading into December and plummet to their lowest in February. 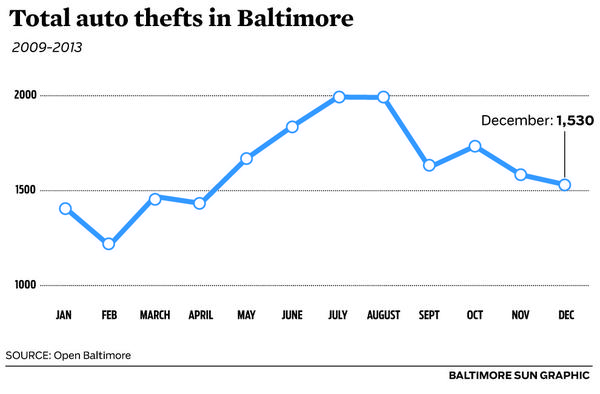 Baltimore matches the national trend, with two exceptions along the rise to and fall from the peak in July. The national trend is a smooth rise and fall, however, in Baltimore, the trend spikes in March and October. February is the lowest in thefts for Baltimore and the nation, but, this could be partially due to the length of the month. Even during a leap year, such as 2012, February is still the shortest month of the year. However, unless the extra days contain a significant number of thefts, extra days would only serve to decrease the month's average.