As the climate changes, a vicious cycle persists: rain, repair, repeat. But Baltimore could soon win millions of dollars from a new national effort to resist the damage that extreme weather is wreaking on communities.

The area along the Patapsco River’s Middle Branch frequently floods during heavy rains and high tides, cutting off neighborhoods such as Brooklyn, Brooklyn Park and Curtis Bay from the closest hospital, as well as from downtown and the rest of Baltimore.

Now, the area is competing for $32 million from a new pot of federal funding designed to better prepare for more frequent and harsher storms. The idea in South Baltimore is to rebuild wetlands long lost to industrialization and pollution, re-creating a permanent, natural buffer against flooding.

The project would mark a new strategy in responding to storms and floods, better preparing to withstand their growing strength and frequency, instead of rebuilding afterward.

And this part of Baltimore could become a proving ground in the fight against climate change because the perils of stronger storms and higher floods are not being confronted in a vacuum. Residents and community groups are pursuing solutions that not only protect neighborhoods, but also make them safer, healthier and happier.

There are efforts to build affordable, energy-efficient housing and create a “green” job center, alongside the proposal to make the Middle Branch riverfront more beautiful, ecologically healthy and resistant to flood damage.

Places like Baltimore may not have the luxury of taking another approach.

“It’s hopefully a really transformational project,” said Lisa McNeilly, director of Baltimore’s Office of Sustainability. “I sometimes say that in Baltimore, we don’t really have the opportunity to only do things for one reason.”

The grant proposal to rebuild wetlands, shepherded by city government and a group called the South Baltimore Gateway Partnership, is one of 22 finalists for funding under the federal program called Building Resilient Infrastructure and Communities.

Marshes serve as natural buffers and filters for storm surge and floodwaters, and the hope is that restoring them around the Middle Branch will help prevent flooding.

[ As extreme weather risks rise, so do the costs of protecting Maryland’s power grid from storms like Ida ]

The infrastructure program — which is independent of debate in Congress over a large-scale infrastructure bill — was designed to be funded based on how much the country spends to clean up and rebuild after disasters, suggesting it will be a growing pool of money for communities struggling to afford costly adaptations to a changed climate.

The Federal Emergency Management Agency named this summer nearly two dozen finalists for $377 million of an initial round of $500 million in grants. It’s expected to announce final decisions this fall.

In Maryland and across the country, local and state government officials are eyeing the program as a source of help to pay for big and expensive projects, though some have criticized FEMA for choosing wealthy states and communities, such as Silicon Valley in California, among those first finalists. Others doubt whether enough money is available to have an impact beyond relatively few communities.

But in those that stand to benefit, like South Baltimore, leaders say that impact could be profound.

The South Baltimore Community Land Trust is among the community groups working to transform a part of the city that is geographically isolated — not just by the Middle Branch, but by highways, rail lines and a legacy of industry and pollution — and where many residents feel that crime and joblessness receive less attention than in other parts of the city.

[ Deadly heat waves are a threat, and a reality. Can Baltimore make residents more resilient to rising temperatures? ]

The land trust is working to develop housing that is designed to promote residential ownership and reduce utility bills and carbon emissions.

Meleny Thomas, the group’s development without displacement director, said the attention and money that could come with the FEMA grant would spur progress toward reversing decades of environmental racism in the city.

“We have to start acting now,” she said. “We can’t continue to wait for a disaster or something to react to.”

The marsh project is necessary because Middle Branch shores have long been altered for the benefit of industry and ships, appearing more like the edges of a bathtub than their natural marshy state. The project would fill them with sand and soil to make them slope more gradually. With native grasses and other plants, they would better hold back and filter out floodwaters.

Already, there are increasing signs of extreme weather affecting this low-lying part of the city that is surrounded by the Patapsco. Heavy rains often flood sections of key, low-lying roads such as Hanover Street, Potee Street and Frankfurst Avenue.

Flooding is common during heavy rain around MedStar Harbor Hospital, which overlooks the Middle Branch and serves communities across South and Southwest Baltimore. It can leave an intersection outside impassable for an hour before floodwaters recede, said Brian Grey, the hospital’s director of clinical support operations. That delays ambulances and prevents staff from reaching the hospital, creating “a huge impact on our operations,” he said.

The grant would fund marsh reconstruction and planting along the hospital’s riprap shoreline, and just to the south, near the intersection of Hanover and Frankfurst. The project also includes marsh construction beneath Interstate 395, near Baltimore Gas and Electric’s Spring Gardens campus, where the utility stores liquefied natural gas used to heat homes and cook food around the region. A BGE spokesman said the project would help protect “an important energy hub for Baltimore and Central Maryland.” 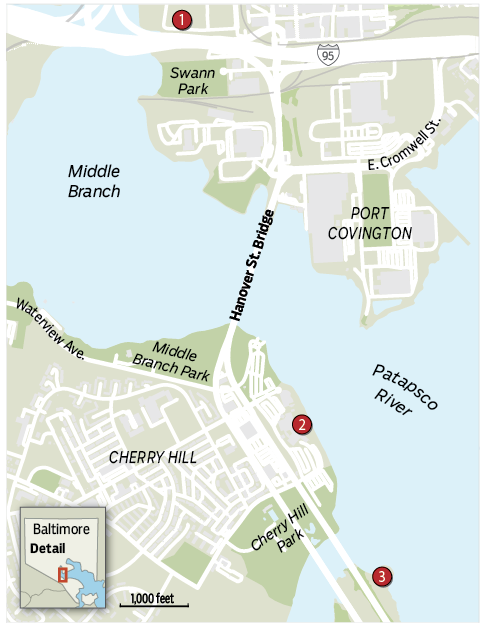 Baltimore’s proposal would mark a major investment from FEMA — more than the agency paid out to repair damage after storms including Hurricane Isabel and Superstorm Sandy hit. Emergency management officials estimate every dollar spent to prevent storm damage saves $6 in expenses to repair and rebuild.

The South Baltimore partnership proposed the marsh project, with a total cost of $47 million, as part of a broader vision called Reimagine Middle Branch. The group was created in 2016 to invest the portion of the gambling revenue from Horseshoe Casino Baltimore, which sits on the northeastern shore of the Middle Branch, that’s allocated to the surrounding neighborhoods.

The gambling money is helping fund other projects, including park improvements and a recreation center under construction.

The partnership would use city and state money and philanthropy to supplement the federal grant for the marsh project.

Brad Rogers, the partnership’s executive director, said he sees the efforts as a way to promote environmental justice, allowing residents of South Baltimore to connect with and enjoy the waterfront in the same way that predominantly white and wealthier neighborhoods like Fells Point and Canton do.

[ Maryland’s Dorchester County is washing away, leaving its residents with hard choices ]

The investment would come as many residents have long been working to reverse decades of environmental racism that concentrated industry and transportation networks around the traditionally working-class neighborhoods. Students like Carlos Sanchez, a 16-year-old junior at Benjamin Franklin High School in Curtis Bay, have pushed for years for cleaner air through a group called Free Your Voice.

Sanchez has met with community associations across South Baltimore, alongside the South Baltimore Community Land Trust, encouraging residents to reduce waste and explaining its impact on their neighborhoods. Most of the garbage is burned at an incinerator that sits on the Middle Branch, and ends up as ash deposited at a landfill just across a Middle Branch creek from Curtis Bay.

The activists also are promoting the idea of a large-scale composting center in the neighborhood, lessening the need for incineration and creating jobs for residents.

Sanchez said the threat of climate change only adds a layer of concern to what area residents already want: “clean air and human rights.”

The land trust’s housing development efforts can address both of those areas. It is designing what is called “passive housing,” which is built to require minimal energy, along a stretch behind Benjamin Franklin High. And the trust has plans for more, including replacing a block of housing on Hazel Street where 30 residents were displaced after a 2017 fire.

For longtime residents, the new focus on adapting South Baltimore to climate change is welcome.

Lisa Bowling has lamented the lack of attention for Brooklyn as addiction and violence have permeated the neighborhood since she moved there in 2003. It’s almost as if many forget her community is part of the city, she said.

So, to see a surge of investment to protect the area is encouraging. Especially when she considers how the Patapsco surrounds her neighborhood.

“If it’s going to get any worse, it’s definitely going to affect us on some level,” Bowling said. “It’ll be overwhelming at some point.”

Climate Change: Ready or Not is an occasional series examining Maryland’s readiness and adaptations to climate change by Baltimore Sun reporter Scott Dance, funded in part by the Abrams Nieman Fellowship for Local Investigative Journalism at Harvard University.