On May 1, 2015, Baltimore prosecutor Marilyn Mosby announced that the six Baltimore police officers involved in the arrest of Freddie Gray – who died after being injured in police custody – have been charged criminally. Below is the timeline of events that she outlined during her press conference. Click here to see the original timeline of events presented by the Baltimore Police. 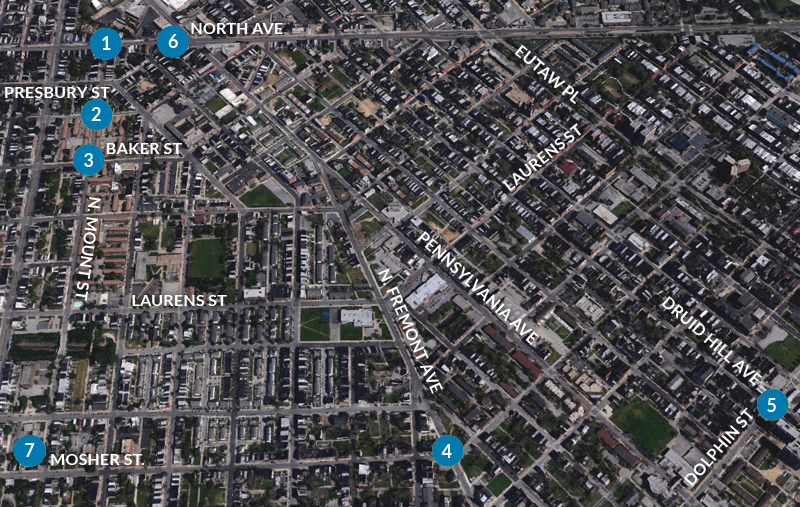 Mount St. and North Ave.
According to the statement of charges Mosby read at a news conference, officers Lt. Brian Rice, Garrett Miller and Edward Nero were on bike patrol at 9:15 a.m. near corner of North Avenue and Mount Street where they made eye contact with Gray.

1700 Block of Presbury St
Gray ran from Rice, and Rice dispatched over departmental radio he was involved in a foot pursuit. Nero and Miller also began to chase Gray. Gray surrendered to Miller and Nero in the 1700 block of Presbury Street, where they handcuffed him and moved him to a location a few feet away. Gray had his hands placed behind his back and handcuffed in a “prone position." Mosby said that at this point Gray told the officers he could not breathe and asked for an inhaler “to no avail.”

The officers placed him in a seated position when they found a knife in the inside of his pants pocket, with the blade folded into the handle, Mosby said. The knife was not a switchblade and is lawful under state law, she said.

The officers took the knife and put it on the sidewalk. Gray started to flail when Miller tried to put him in a restraining technique called a “leg lace” and “held him down against his will until the BPD wagon arrived.”

Rice, Miller and Nero failed to establish probable cause, as no crime had been committed Mosby said. They “illegally arrested Mr. Gray.”

Mount St. and Baker St.
The wagon driver, Goodson, along with officers Rice, Miller and Nero, loaded Gray into the wagon without securing him with a seat belt, which is a BPD general order, the statement said.

Rice then directed the wagon to stop at Baker Street.

At Baker street, Rice, Nero and Miller removed Gray from the wagon and placed flex cuffs on his wrists and leg shackles on his ankles and completed proper paperwork. Nero, Rice and Miller moved Gray back into the wagon, placing him on the floor head first and on his stomach. Again, Gray was not secured with a seat belt.

Rice told Goodson to drive the wagon to Central Booking.

N. Fremont Ave. and Mosher St.
After leaving Baker Street, Gray “suffered a severe and critical neck injury as a result of being handcuffed, shackled by his feet and unrestrained inside the BPD wagon.”

From Baker Street, Goodson drove to Mosher Street and Fremont Avenue, where he parked, and checked on Gray.

“At no point did he seek, nor did he render any medical assistance,” she said.

Druid Hill Ave. and Dolphin St.
Goodson drove to Central Booking, and a several blocks later he called into dispatch that he needed to check on the status of a prisoner and requested additional units at Dolphin Street and Druid Hill Avenue.

Officer William Porter arrived at the intersection, where he and Goodson went to the back of the wagon to check on Gray. “At that time, Mr. Gray requested help and indicated he could not breathe,” Mosby read from the statement.

While discussing what to do with Gray, the officers received a request for additional units for an arrest at 1600 W. North Avenue, and Porter left the intersection.

“Despite Mr. Gary’s obvious and recognized need for medical assistance, officer Goodson in a grossly negligent manner chose to respond to the 1600 block of W. North Avenue with Mr. Gray still unsecured” and without aid, Mosby said.

1600 North Ave.
Goodson arrived to pick up another individual at W. North Ave. and Pennsylvania Ave., where Nero, Rice and Miller had also responded. At that point, Goodson opened the back of the wagon, where Porter and White saw Gray “unresponsive” on the floor of the wagon.

White, who Mosby said is responsible for investigating two citizen complaints against Gray’s illegal arrest, tried speaking with Gray. “When he did not respond, she did nothing further despite the fact she needed a medic,” Mosby said.

White made not effort to assess his condition, help or call anyone.

Officers then loaded a second prisoner into the opposite side of the wagon and went to the Western District station, where Goodson “for at least the fifth time” did not restrain him, Mosby said.

1000 block of N. Mount St., Western District station
At the station, the defendant from the North Avenue arrest was unloaded, and taken inside before officers attended to Gray.

By the time officer Zachary Novak, White, and an unknown officer unloaded Gray, he was “no longer breathing at all."

A medic was called and determined he was in cardiac arrest, and that he was “critically and severely injured."

Gray was rushed to Shock Trauma where he underwent surgery. He died on April 19. The medical examiner ruled his death a homicide and “believed to be the result of a fatal injury that occurred when Mr. Gray was unrestrained by a seat belt while in the custody of the Baltimore Police Department wagon.”

Here is an interactive map of the locations mentioned in this story: