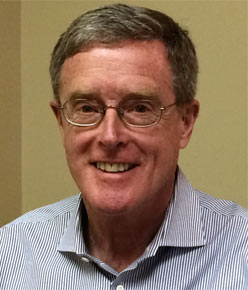 In His Own Words:
Step-by-step problem solving

How Many Years: Retired for 3 years

Issue 1: Jobs:
The Federal government can assist in job creation in many different ways, including government spending and reducing the level of taxes and fees paid by individuals and businesses.

Despite efforts by the current administration, unemployment has remained far too high and most economists agree that full employment is still several years in the future. There are several reasons for this delay. The "sequester" has reduced government spending. Short term interest rates are near zero with no further room to run. Finally, our national labor market has structurally changed with the transfer of many manufacturing jobs to China and similar countries and a sharp rise in demand for knowledge workers with higher levels of training.

I favor the following measures to address the jobs challenge:

substantially increase Federal investment in education, at all levels, so that more young Americans can fill job vacancies in knowledge intensive industries and do so without starting their working lives with outsized student loans, invest in infrastructure to ensure that our roads, rail lines, airports, etc are up to the task of supporting a growing economy, more aggressively assert our rights under the World Trade Organization to stop foreign manufacturers from selling goods below cost and create public awareness that reducing trade deficits is a national priority directly linked to creating more jobs, incent multinational corporations to repatriate the large amounts of cash (approximately $1 trillion) they have in offshore accounts and reinvest that money at home, simplify the corporate tax code and lower the top rates; this will put more cash in the hands of the typical small and medium sized companies based in Maryland's 1st District which will use that cash to grow; discontinue world-wide taxation of corporate income, but balance this with stronger rules regarding where value is created and transfer pricing – both of which are needed to keep multinationals from unfairly shifting taxable income outside of the U.S.

Issue 2: The Environment:
We have a moral obligation to protect the environment.

Global warming is real and I support taking steps to actively address green house gases. America has two environmental success stories that we can build on. We reduced acid rain by 50% since the 1990s using a cap and trade system, which is still very much in effect today. The CAFE standards for the automotive industry have gradually increased fuel efficiency for all automobiles and light trucks and even created new kinds of vehicles – hybrid and electric. There is wide, across-the-board support for these initiatives and no call for their repeal. The key to both is a limited role for government in establishing standards, leaving the greatest possible freedom for private industry to innovate to achieve mandated targets. Carbon emissions can and should be addressed using both of these approaches. We should start by looking at coal fired power generation and ways to encourage converting these plants to natural gas.

I strongly support our ongoing efforts to clean up the Chesapeake Bay. As many people know, water run-off from water treatment facilities, storm drains and agriculture is the heart of the issue. Infrastructure and technology are needed to get a handle on these problems – better drainage systems in our fields, improved municipal storm water drainage and holding systems, and research into how we can better use fertilizers including poultry waste. The farming community, poultry business and advocates for Bay must all work together and financial burdens must be fairly shared.

We all treasure the Chesapeake, so we all should pay our share for the cost of improving it, whether we are just individuals and families who enjoy a day on the water once in a while, or whether our relationship to the Bay is more intensive. If every year, year after year, we make the many smaller, local investments needed to address problems which are visible from our homes, farms and businesses, we will succeed.

I actively support the Chesapeake Clean Water Blueprint and its goal of restoring the water of the Bay to 70% of its natural state by 2025. We must ensure that the Blueprint is not compromised by congressional hostility, litigation and lobbying and I will work with energy to see that this does not happen.

Our current congressman, Andy Harris, has a 7% approval rating for his votes in Congress on environmental matters. The 1st District deserves better.

Issue 3: The Federal Deficit:
I favor gradually reducing the Federal deficit to bring spending in line with revenues.

To achieve this goal, we must: reduce discretionary spending wherever we reasonably can, curb the growth and size of entitlement spending and, finally, raise enough extra revenues to ensure that the cuts we need to make in the first two categories do not hollow out our capacity to invest in our future. In the last several years, as we all know, our Congress has been utterly incapable of addressing these issues with any degree of common sense and long-term thinking.

Discretionary spending represents about 30% of our budget and pays for things that most of us agree we need, like national defense, food and drug safety, transportation safety, medical research, and a host of other activities which make our daily lives healthier and safer. We must cut duplication and waste in these programs and the agencies which administer them. But we all know that there is no way that we can cut enough from this first category to balance the budget.

Entitlement spending, or spending required for programs such as Social Security, unemployment, Medicare, and food stamps, totals about 64% of the budget. We must reshape the costs of these programs using a combination of many tools, including:
gradually increasing the age at which entitlement programs become vested, in line with increased longevity, means-testing access to entitlement programs so that those who have more pay more, negotiating more aggressively with for-profit providers of services, drugs and equipment, standardizing fee schedules for routine services, implementing common IT protocols to avoid technology silos, and redesigning incentive systems to replace fee-for-service with a results measured reimbursement system.

Finally, we must acknowledge that moderately increasing revenues will have to be a part of any realistic effort to reduce the deficit. I would favor simplifying the tax code by lowering the top brackets and reducing or eliminating many so called "tax expenditures", such as corporate welfare. I would also advocate more progressive tax treatment of passive income such as capital gains and dividends, commencing for income levels above a negotiated threshold.