As girls soccer coach Crosby Healy looked out at his team practicing on a field at Meadowood Regional Park in Lutherville, he saw five other teams on a field where there should have been two.

A few nights later, the coach stood his ground against three football teams trying to use the field when he was scheduled to use it for soccer practice.

The Towson resident of nine years said the two instances last fall are symptomatic of the lack of recreational space in and around Towson as it undergoes transformational development.

Click on the pinpoint in the map above to learn more about a particular development.

A Baltimore business owner, Healy sees the new development as positive. He enjoys a beer at the Towson Tavern and a lively nightlife in downtown. He also appreciates the opportunity for his 15-year-old daughter and some of the other young soccer players he coaches to catch a movie at the new Cinemark theater at Towson Square.

With more than $1 billion in private investment in Towson's redevelopment since 2009 – which includes 2,700 completed and proposed townhomes and apartments — Healy is among many looking for the funding necessary to provide more open space in Towson to accommodate that growth.

In addition to the residential developments, a new fire station is under construction. Towson has also added to its office, entertainment and retail space Towson Commons, which features a L.A. Fitness; the $27 million renovation of Towson City Center, a 155,000 square-foot, 12-story commercial space; and a 4.2-acre entertainment center, Towson Square, which is anchored by a Cinemark movie theater.

"It doesn't mean that we think that the movie plex took over a space that could have (been) a baseball field," Healy said. "What we're saying is the funds that should be there to allow us to develop other green space in other parts of the community should be made available."

Towson officials and residents are split on the execution of the development prescribed in the Baltimore County government's Master Plan 2020, released in 2010, which includes a vision for the future of Towson as the urban center of the county. County officials and business leaders look forward to a revitalized Towson as a modern cosmopolitan community with a thriving economy, while many community members take issue with the density and speed of development, which they say is being approved without attention to traffic, infrastructural and open space needs.

Above: The Mews at Towson

County Councilman David Marks, a Perry Hall Republican who represents Towson, said he has been guided by Master Plan 2020 in many of the decisions he has made for the area.

Del. Stephen Lafferty said that while much of the redevelopment has been positive, no one has taken a "comprehensive look at Towson's growth and how to accommodate that growth."

"I don't think Baltimore County is unique in that their failure to plan the cumulative impacts has a lot greater impact overall than what people expect. They do it project by project," said Lafferty, a Democrat whose district includes Towson. "If it gets to a level where it's too much, that's when the county ratchets back."

Klaus Philipsen, architect and president of ArchPlans, an urban design, planning and architecture firm in Baltimore, said transit, pedestrian mobility and open space, all of which have been part of the dialogue surrounding Towson's redevelopment, must be looked at when designing an urban core.

Philipsen, president of the land preservation group NeighborSpace, said the Urban Rural Demarcation Line, developed in 1967 to protect rural areas from dense development, has successfully kept part of the county rural but that within the boundary, development has been chaotic. As a result, 90 percent of Baltimore County residents live inside the URDL.

"Baltimore County was successful in restricting development outside the URDL, but inside, it's kind of a free for all," he said.

The largest piece of the puzzle in Towson's redevelopment has been Towson Row, a $350 million, 1 million-square-foot project that would include 61,250 square feet of retail space, 226,000 square feet of office space, 374 apartments, a 170-room hotel, 900 beds of student housing, 1,586 parking spaces and a Whole Foods. The project's land, which is bounded by York Road, Towsontown Boulevard and Washington and Chesapeake avenues, has been cleared and its open space requirement waived.

The project's final hearing before the Planning Board is scheduled to take place on Thursday, Aug. 6 in the county's Jefferson Building, said Darryl Putty, a Baltimore County project manager.

Towson Row, which is being developed by Caves Valley Partners, is joined by a number of other projects in the works, including The Flats at 703, a 105-unit apartment complex on Washington Avenue; Southerly Square, with 175 apartments at 901 Southerly Road; and Towson Mews, with 34 townhomes, bounded by East Pennsylvania, Jefferson and Virginia avenues.

Completed projects include Towson Green Townhomes and The Winthrop, The Quarters, The Palisades and Towson Promenade apartment complexes.

Marks said he has also discussed with property owners the possibility of building an apartment complex above Towson Circle, where Barnes & Noble bookstore and Trader Joe's, among other shops, are located. 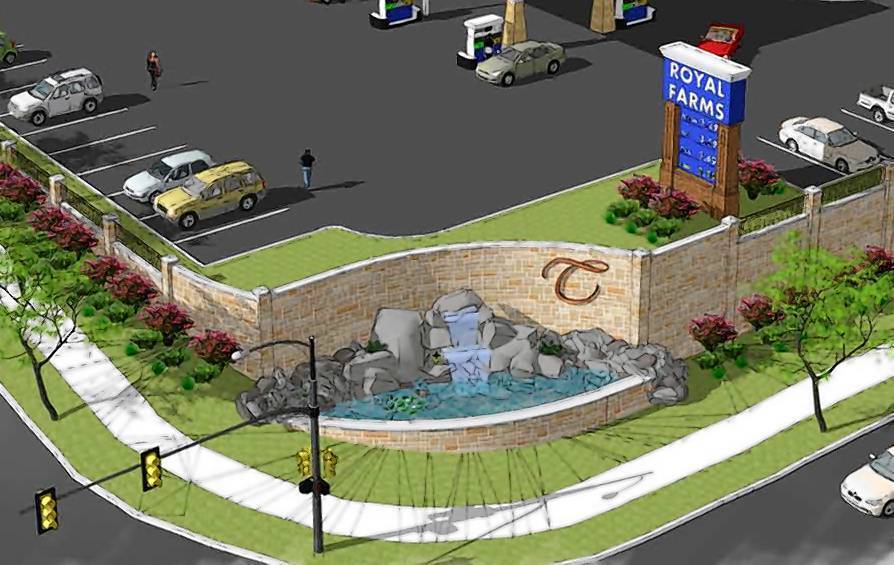 The conversation on new developments has also included the controversial student housing complex 101 York, which Marks said recently withdrew its second planning proposal after the project grew to be larger than what was initially presented. The project's original proposal, which was never withdrawn, is still in the planning process. Also discussed was redevelopment of the old Towson fire station property that was purchased by Caves Valley Partners after it proposed a Royal Farms for the lot.

Open space at a premium

Mike Ertel, Greater Towson Council of Community Associations president, has lived in Towson for two decades. He said young families began moving to the area in the late 1990s and that that demographic has continued to grow.

To keep them here and attract more people, he said, amenities, such as community pools, fields and walking trails, need to be updated along with new developments.

"When you have a young family, they want to drive a 2013 Toyota minivan and what you're giving them is a 1992 Ford Escort wagon," Ertel said. "They don't want it. They want something newer, nicer, that's got the amenities in it."

The county's decision to waive Towson Row's open space requirement for a fee of $55,000 has many residents concerned that other projects on the planning department's agenda will receive the same treatment. 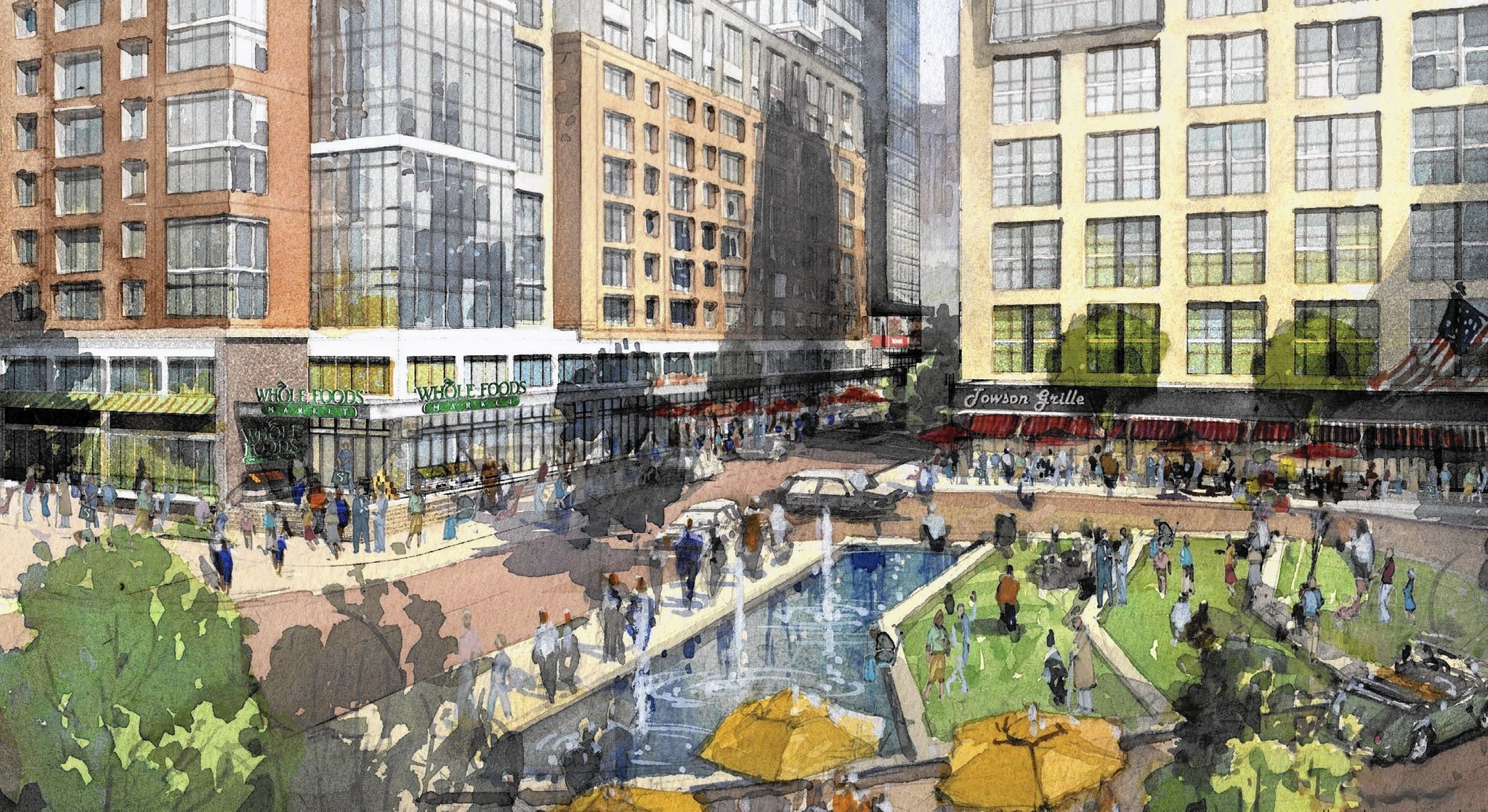 Towson Recreation Council President Janine Schofield said developers should be charged fairly and apolitically to waive open space and that any change to the open space requirement should be retroactively applied to current developments.

State Sen. Jim Brochin said that while well-thought-out redevelopment is positive, "packing everything into every square inch that's available is not the way to do it."

"It should be a quality-of-life issue," said Brochin, a Democrat whose district includes Towson. Towson Row "could be a beautiful project if it was scaled down, and it would be an amazing project if, right adjacent to it, there was a ball field or a soccer field," he said.

County Executive Kevin Kamenetz announced in June that the county had purchased 2.5 acres of property off Aigburth Avenue to create a park in Towson. The county is also contributing $3.2 million to new turf fields at Towson High School and the Carver Center for Arts and Technology and to repurpose Patriot Plaza into a small, city park near the courthouse.

County Councilman Tom Quirk, a Democrat who represents Catonsville, is working to introduce a countywide revised open space bill that could increase the price developers might have to pay to waive this requirement.

But, Katie Pinheiro, executive director of The Greater Towson Committee, a nonprofit that supports investment to redevelop Towson for its community, said the county should be careful to increase open space fees for developers so it doesn't "chase them away." 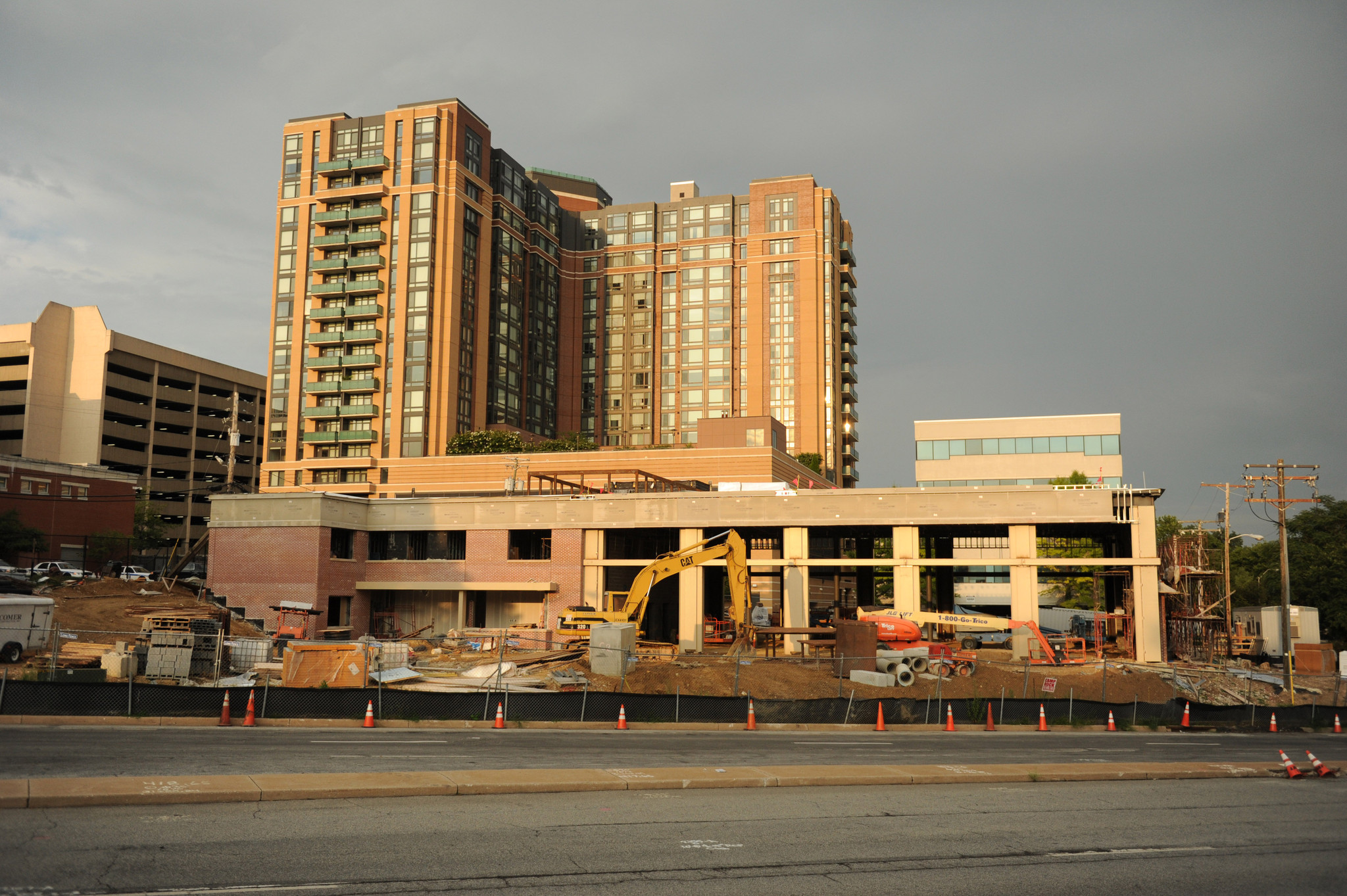 Above: Site of the new Towson fire station

"We don't feel that developers — who are doing a great job in turning Towson into an urban atmosphere — need to be charged so much that it doesn't make sense for them to develop in Towson," she said.

David Schlachman, of DMS Development, which is proposing the 101 York student housing complex, did not return a phone call seeking comment. Arthur Adler, of Caves Valley Partners, which is developing Towson Row, said he did not wish to comment on the development for this story.

He said this is evidenced by intersections with F ratings from the Department of Public Works. In 2011, the intersection at Burke Avenue and York Road, between Towson University and the location of the proposed 101 York, received an F rating that was upgraded to an E rating the next year.

"Anyone that lives in Towson or works in Towson that either tries to get home or leave in the evenings ... can sit through any number of traffic signal cycles," Hiser said.

To remedy some of the city's transportation needs, Marks has been working to get a Towson Circulator bus, similar to Baltimore City's, with the help of funding from Gov. Larry Hogan's administration.

"We don't have any more room to build highways in Towson," he said. "We have to do a better job with what we have."

But Kamenetz said Towson doesn't have a traffic problem and that discussions about a Circulator are premature.

"Most people who will live in downtown Towson will walk and those people who are arriving are beyond the radius of a Circulator so that doesn't fit into this core," Kamenetz said.

Though a circulator is necessary to provide mobility to Towson residents, Philipsen said, many people often get the traffic issue backward. Urban areas make for fewer drivers as people walk and take other forms of transportation, he said.

A widespread area of development creates more traffic than an urban core, he said. Philipsen said this explains why large urban areas like Manhattan have the same amount of traffic as Towson.

At the same time, county officials see a bright future for Towson. Marks said he envisions "a cosmopolitan community that reflects the best of college life and family amenities."

Kamenetz said he sees the future of Towson as being similar to that of Bethesda, in Montgomery County, but better.

About eight years ago storefronts were empty and the new development has boosted the city's economy, said Nancy Hafford, executive director of the Towson Chamber of Commerce.

"We want more than anything more bodies living here in Towson, because the more people that live here, the more people support the business community, not just 9 to 5, but on Saturdays and Sundays, too," said Hafford, who is also an at-large member of the Baltimore County Planning Board.

Officials do listen to the communities when it comes to development plans, though someone is always going to be dissatisfied with the result, Hafford said.

"Baltimore County doesn't spoon feed everybody. There was a lot of input that went in for a long time," she said. "You can never make everybody happy whenever you make a change."

Kamenetz said he looks forward to a city with round-the-clock bustle.

"Towson traditionally has been a sleepy little town that goes to bed very early," Kamenetz said. "What we're trying to do is create a wonderful downtown experience, not only during the daytime but also at night."

This story has been updated to clarify that a second planning proposal for 101 York was withdrawn.