Freddie Gray, 25, died on April 19, 2015 - a week after he was injured while in Baltimore police custody. Here is the timeline of events that led up to his arrest and eventual transfer to Shock Trauma. Click here for a full timeline of Freddie Gray's arrest, death and the aftermath. 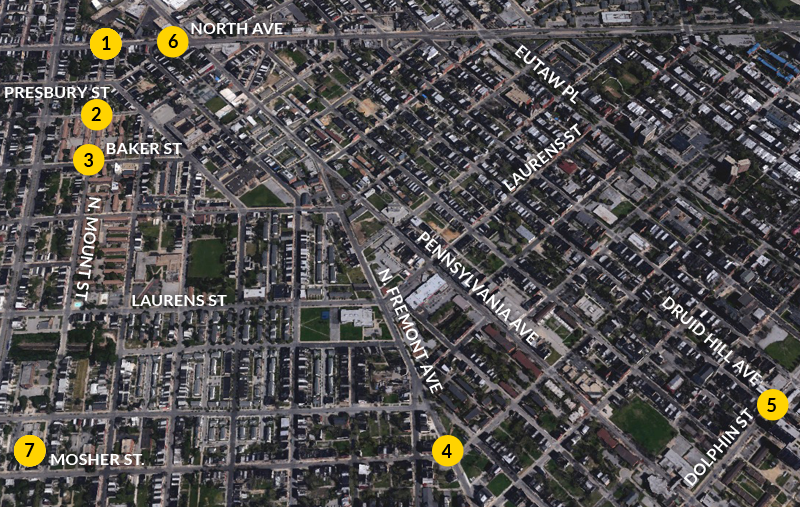 8:40-8:46 a.m. 1700 Block of Presbury St ‐ Police pursue Gray and eventually apprehend him two blocks away at 1700 Presbury
Gray is arrested and placed in a police transport van. Police say this is done “without force or incident,” but residents of the neighborhood describe a much more violent encounter and private video from the scene shows Gray in pain and dragging his feet.

8:46 -8:54 a.m. Mount St and Baker St ‐ Police re-position Gray at Mount and Baker streets
Police say Gray is acting “irate” in the back of the van. The van is stopped and Gray is placed in leg shackles and repositioned in the van. Residents again describe a violent encounter.

8:54-8:59 a.m. Previously unknown stop at N. Fremont Ave. and Mosher St.
Deputy Commissioner Kevin Davis said during a press conference on Thursday, April 30 that police determined that the police wagon that was transporting Gray made a previously unknown stop. Investigators scoured the area for surveillance footage and found a private camera showing the van stopped at Fremont and Mosher streets after picking up Gray, he said.

8:59 a.m. Druid Hill Ave. and Dolphin St.
As the van travels toward Central Booking, the driver again stops near the intersection of Druid Hill Avenue and Dolphin Street and calls for an officer to check on Gray. After the check, which has not been described, occurs, the van is requested to return to the 1600 block of W. North Avenue to pick up another suspect.

8:59 – 9:24 a.m. Travel from Druid Hill and Dolphin St. to 1600 North Ave ‐ Police pick up a suspect
The van travels back to W. North Avenue and picks up a second suspect. Police have declined to identify the second suspect, saying he is now a witness in the criminal investigation.

Here is an interactive version of this map