Newborn babies are not cute. Anyone who thinks otherwise is either a new parent blinded by affection for their larvae-person, or they're just kidding themselves. So in a sense, the grotesque renderings of the infant Christ in many of the paintings at the Walters Art Museum are more realistic, albeit highly stylized, than the idealized doll-Jesuses painted during the late Renaissance and Baroque periods, after European artists figured out how to capture depth and flesh and accurate head-to-body ratio. Mostly created during the early Renaissance period in Italy, these older depictions may not look like actual freshly baked humans, but they carry a similar ghoulishness.

We visited the Walters to find these babies, the common features of which are six-pack abs, receding hairlines, and deep under-eye circles—a confusing mix of age indicators, none of which are infantile. Pre-high Renaissance images of infant Christ did not resemble old men because the artists were unskilled or somehow had never seen a human child—art historians claim this bizarre representation was, in fact, deliberate. The paintings were informed by the idea of the homunculus—"little man." Jesus was thought to be homuncular, born fully formed and unchanged, so that translated visually to man-babies.

At the Walters, we encountered dozens of homuncular Virgin and Child images, and narrowed our findings down to the most disturbing few.

In the Byzantine, Russian, and Ethiopian exhibit, we have this small gem by Niccolò Brancaleon, an Italian artist who worked in Ethiopia. The only thing about the Christ figure that indicates infanthood is his small size; otherwise, this is just an old, balding man. 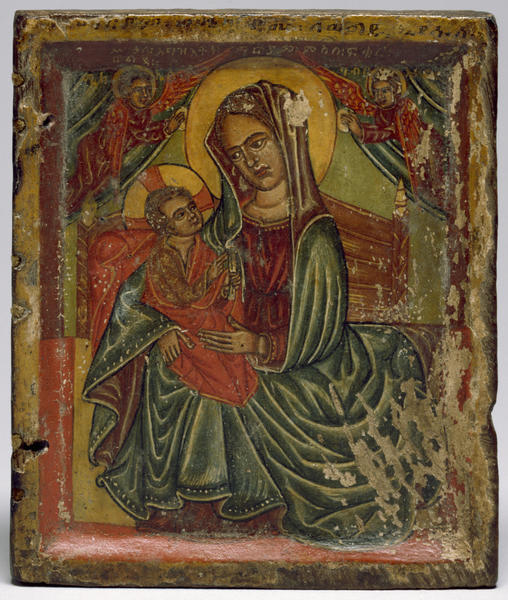 In the 15th-century Italian art room, we found 'Madonna and Child with Saints and Donor' by Carlo Crivelli, painted around 1490. Along with the child's fine threads and golden locks, he's got an oddly bulbous nose and powerful gladiator calves, presumably to help him walk on water and bear the weight of the cross a couple of decades into his life. 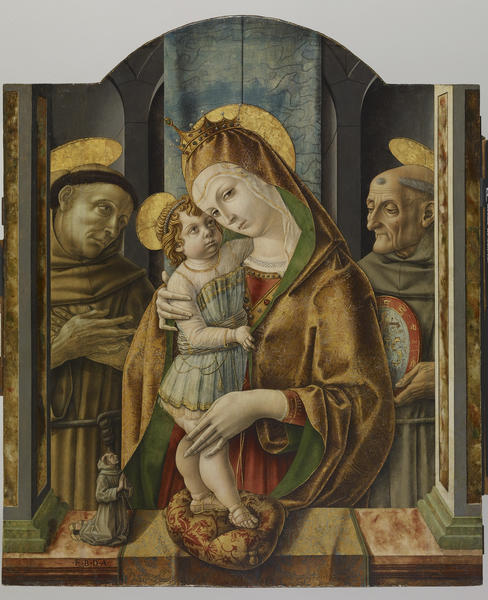 Painted in Spain by Gonzalo Pérez, 'Madonna and Child on a Throne' is particularly haunting. Almost as creepy as his pale, gaunt mother, Christ cranes his neck upward, his eyes blank, as if possessed by something unholy. 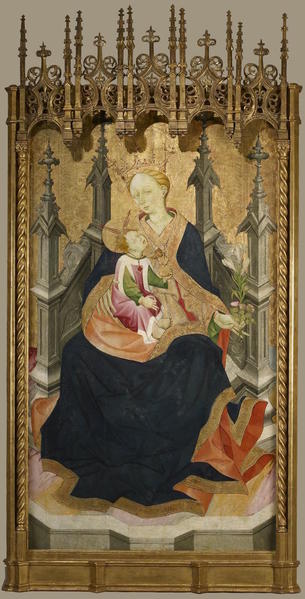 Andrea de Bartolo's 'Madonna and Child with the Four Evangelists,' created in the first decade of the 15th century, features a Christ child with skinny arms somehow connected to his box chest without shoulders. 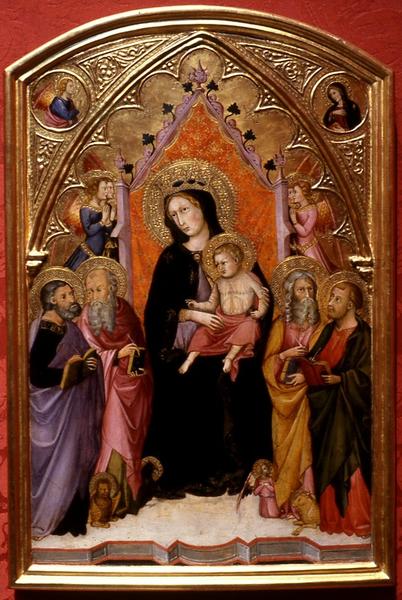 In 'Madonna and Child with Saints Peter, Paul, John the Baptist, and Francis' by Olivuccio di Ciccarello da Camerino, Jesus' head appears to swell like an overblown balloon about to burst. That being said, the child's head lends the painting an interesting sense of tension. 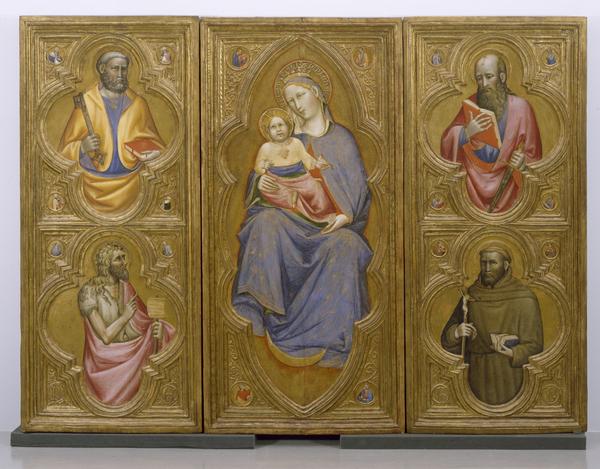 Later on, during the mid-16th century in Florence, Rosso Fiorentino painted this darling 'Holy Family with the Infant Saint John the Baptist.' Here, Jesus has his mother's inky black eyes—a signature of Fiorentino's portraits. Not only Jesus' eyes, but his entire baby face appears to be melting off his bones. This might be the cutest Jesus here if his pool-eyed gaze weren't so uncanny. 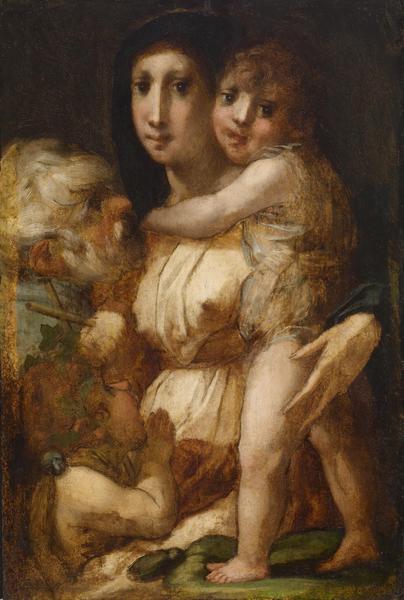 And then, there's the crown jewel of ugly babies, crafted by Giovanni di Paolo and his workshop in late 15th-century Siena: 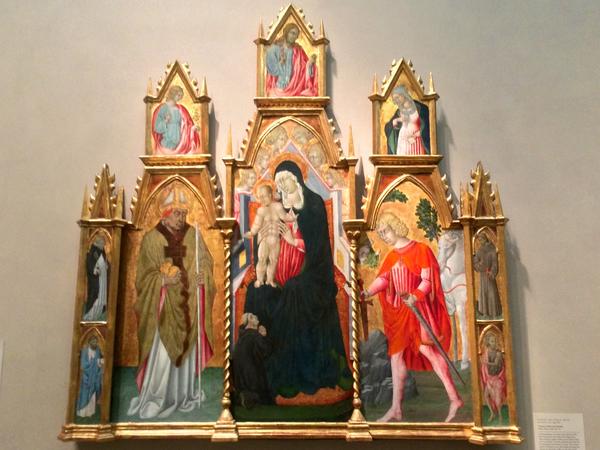 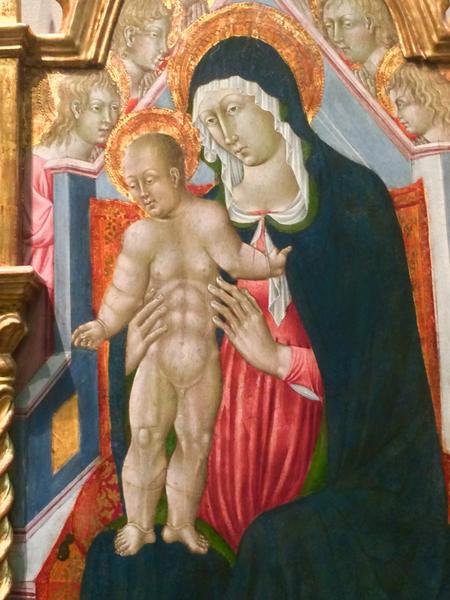 There's a lot to unpack here. For one thing, this baby's legs make the shanks in Crivelli's painting look like sticks. The ankles and kneecaps are shrunken, emphasizing the muscular, stonelike trunks that must be incapable of movement. A receding hairline and long, bridged nose gives him the face of a much older dude. Both the palms of his hands and the soles of his feet appear to be shortened so the the phalanges seem to extend directly from the limbs. His washboard abs and disproportionately thick, chunky arms make him look like a balloon animal or a mass of sausage links. His pectorals, however, seem less defined and more like female breasts. And then he's got the saddest gray flap of a pubic-ish area. All in all, the image is scarring. How this or any of the children here inspired faith and devotion is hard to imagine, but nonetheless impressive.