When people talk about disparities in Baltimore, the leafy streets and robust turn-of-the-century homes in Roland Park are often cited as an indicator of the city's walled off areas of wealth. Given that the neighborhood—one of the first planned garden suburbs in the country—was a leader in discriminatory housing practices, and many of the homes currently listed on Zillow are going for north of half a million dollars, this is not entirely wrong.

But the twisting roads through the wooded hills of the northern neighborhood offer something everyone in the city can enjoy: an escape into nature.

This is by design. Landscape architects John Charles Olmsted and Jr., whose father is best known as the designer of Central Park, laid out the neighborhood of Roland Park to embrace the topography of the hills just to the east of the Jones Falls, following design principles set by Olmsted Sr. His idea of the "genius of place" called for working with the landscape, and respecting the unique features of the site, even the aspects that could be seen as problematic.

So instead of grading the land and creating a grid, there are curving roads that meander along hilltops and through valleys, not offering a direct path anywhere. This design enhanced what was existing to create the "picturesque": a naturalistic landscape of rugged terrain, rocky outcroppings, and lush vegetation that lend an air of wildness and mystery.

The result offers picturesque streets, terrific sightlines, and some striking vistas, but it doesn't make it easy to get from point A to point B. And at the time the Roland Park Company launched in 1891, cars were a rarity, meaning almost everyone traveled by horse, streetcar, or their own two feet.

That's why the Olmsteds laid out a series of 18 narrow footpaths that cut between stately mansions and through the woods to create more direct routes for pedestrians. These paths still exist today—though some have been incorporated into more recently added driveways—and are open to the public. The paved paths are marked by charming wooden signs, handrails, and the occasional lamppost, and are maintained by the Roland Park Roads and Maintenance Corporation. And while many are mere block-long shortcuts that connect streets, there are several longer paths that provide a great behind-the-scenes tour of the rugged terrain of Roland Park and an up-close look at some of the neighborhood's ornate architecture.

Olmsted Sr. believed that natural landscapes were psychologically and physically soothing, able to "refresh and delight the eye, and through the eye, the mind and the spirit," and he and his sons designed landscapes with that in mind. Walking along the paths, you'll sometimes feel like you're in the back woods, and other times like you're walking in a garden, with hostas, honeysuckle, ivy, roses, and other plants lining the route.

It's a great walk in the city—and feels far removed from urban living.

Lauren Schiszik is the Vice President of the Friends of Maryland's Olmsted Parks and Landscapes (FMOPL), which offers guided tours of Roland Park's footpaths and many other programs. 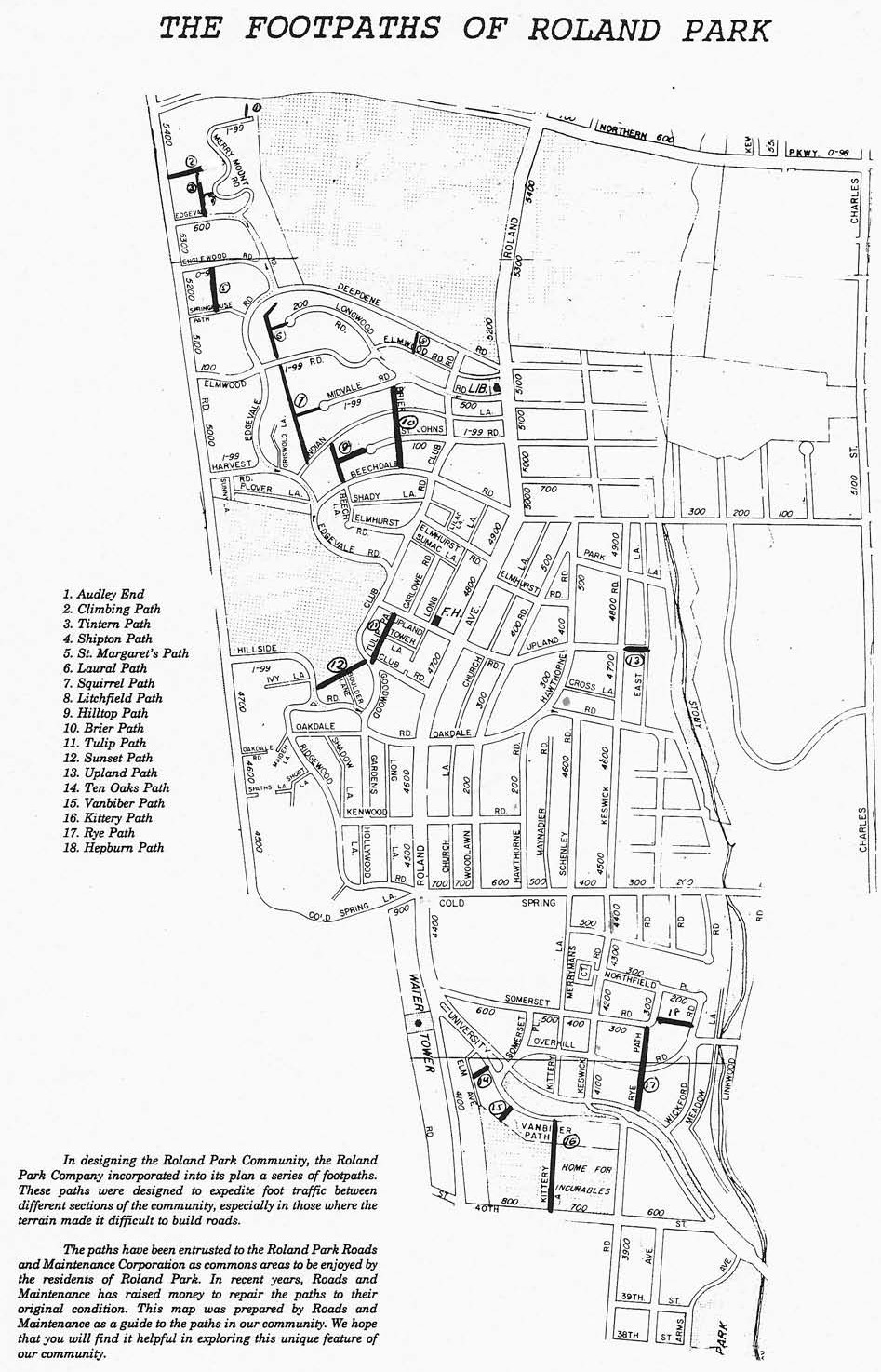 Time for a Walk

Unless you're planning on doing some serious walking, take a car or bike so you can easily move between the paths. The best paths for long walks are in the western portion of Roland Park bounded by Cold Spring Lane, Falls Road, Roland Avenue, and Northern Parkway. Use the map above (which you can also find on Roland Park's website) to get your bearings.