Shortly after Donald Trump tweeted “It was a great honor to welcome the President of Turkey, Recep Tayyip Erdoğan, to the @WhiteHouse today!,” members of Erdoğan’s security staff, many of whom appear to have been armed, attacked a peaceful protest across from the Turkish ambassador’s residence in Washington, D.C.

“We were only 13 people [plus two children] but we were Iranian, Kurdish, Armenian, Ezidi, American, man and woman, and we were basically there to protest Erdoğan and the Turkish state’s fascist policies,” said Pooyan Bahar, one of the protesters who describes himself as a human rights advocate. “And we were attacked by Erdoğan’s security guards who basically outnumbered us five to one and they brutally attacked us.”

Erdoğan’s government has been engaged in a violent suppression of the press and a purge of universities, the military, police, civil service, and political parties of opponents since a failed coup last July. But Turkey's campaign against the minority of Kurds, some of which has been engaged in long separatist struggle with the Turkish state, has been particularly intense, drawing comparisons with some of the worst atrocities in Syria.

Earlier in the day, protesters, both for and against Erdoğan, had gathered in front of the White House where there was a small skirmish between the two sides.

Politics can be complicated for Kurds living in America. Some of the anti-Erdoğan protesters were there partly to show their support for Trump, who defied Erdoğan earlier this month when he agreed to directly arm the YPG (Kurdish People's Protection Units) which is doing much of the on-the-ground fighting against ISIS in Syria. But they were also opposed to Trump inviting the Turkish leader to Washington at all.

"We wanted to show our support to President Donald Trump of sending the arms to YPG and the Kurds they are fighting for all of us," said Ceren Borazan, one of the protesters who was attacked. "And I wanted to President Trump not to welcome Erdoğan. That’s why I wanted to use my right to expression and express my thoughts."

A small group of protesters heard Erdoğan would stop by the ambassador’s residence, a couple of blocks from the Turkish embassy, and decided to march there.

A small fight broke out, Bahar said, with kicking and punching on both sides but both sides quickly retreated when police pushed them back.

Then, Bahar said, Erdoğan seemed to arrive at the ambassador's house, which used to be the embassy: “As he was going inside the embassy, some of his security forces came out and there were about a hundred of them and each time, as you’ve seen on the videos, they are beating us and it is five people beating one person.”

Kurdish and Armenian and Ezidi protestors brutality attacked by members of Erdogan security in front of Turkish Emb pic.twitter.com/StrRKgNHfr

Bahar saw two different groups attack the protesters. “The ones with the suits, which I have seen pictures that show they were wearing guns under their coats, and the ones who were wearing green were openly wearing firearms.”

In videos, the scene is chaotic. When MPD officers pushed the men in dark suits away from one protester, they simply ran around the officers to kick or punch or choke others with a calculated, yet frenetic, violence.

"There were people with the tie and suits and very nice dressed and they had Turkish flags and as soon as we walked through they started screaming, were pretty aggressive, started coming toward us, you know," he said. "I had my daughter on my shoulder as we walked. She got so scared. I don’t know how to describe it. It was terrible. All of a sudden there was hundreds of them attacked us."

Arya says that a friend who was also there with a child, took his daughter and started running away from the area.

"I was attacked by many people. I don’t remember how many but I remember at first I got a kick to my chest and then I think another guy from behind put me down and then I just remember there were kicks all over, kicks and punches, punches in my head, in my neck, in my back body," he said. "I just tried to cover as much as I can my front face, my head was down. I don’t remember anything else. I was maybe unconscious for a second from the punches."

Later, Arya said, his daughter was terrified that the men knew where they lived. "It kind of reminded me of me when I was a little kid. I was so upset yesterday when she say that," he paused here, choking up a little. "Because it takes me right back there when I was her age."

Arya came from the Iranian part of Kurdistan, where his mother was arrested when he was about the same age as his daughter. "I was a little kid when my mom, you know, was arrested for being a Kurd, being an activist, being a women’s rights activist," he said. "I couldn’t see her for five years. Seeing what happened yesterday brought all of those memories back. I was beaten as a kid. You could be beaten by police any time."

At least nine people were hospitalized after the attack. “One female friend you can see she’s on the ground and these men come and they are kicking her, like multiple people come and just walk on her and they kicked her in the head and she had an MRI yesterday in GW hospital,” Bahar said.

Bahar said that one of his friends, seen shaking on the ground in a video, had a seizure after being attacked and another was choked, an incident caught in photographs and video. 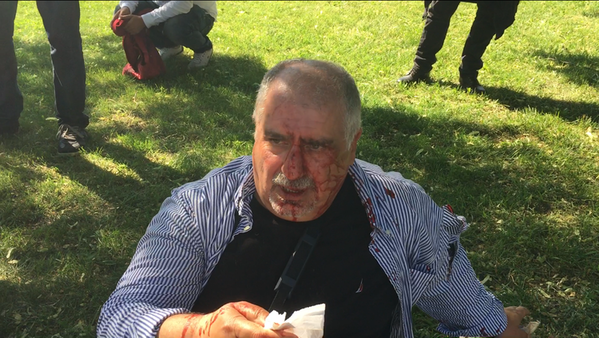 Ceren Borazan, the woman who praised Trump's support of the Kurds, was grabbed by one of the men in suits and choked. "While he was attacking me, they were saying really unbelievable bad words to a woman I don't even want to mention here," she said. "I'm worried about my life and my friends life, as a Kurd, as a woman." 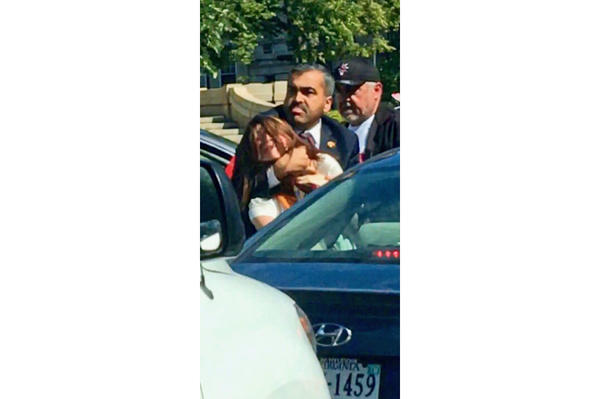 Although MPD struggled to contain the violence and appeared ineffectual against the violence, the police chief promised there will be some accountability.

“Attacking peaceful protesters goes against our core values to exercise our First Amendment Rights here in Washington, DC.,” said police chief Peter Newsham. “There were two arrests yesterday afternoon, and MPD will be working with our federal partners to assure that there is accountability for any others involved.”

One of those arrested, Jalal Kheirabadi, a Kurd, was charged with assaulting a police officer.

"Jalal was just defending himself," Arya said of his friend. "They tried to get Jalal and take him to their crowd so they could beat him up really, they tried to kill him, they tried to push him, he tried to defend himself. They say he hit the police. Come on, there was no police over there."

The other arrestee, Ayten Necmi is a resident of New York and was charged with aggravated assault for allegedly striking a protester.

Bahar said that he and his associates are trying to press charges against the security forces who attacked them but fears that the many “are Erdoğan’s security attaches, who are coming with him from Turkey and are going to return with him to Turkey today.” 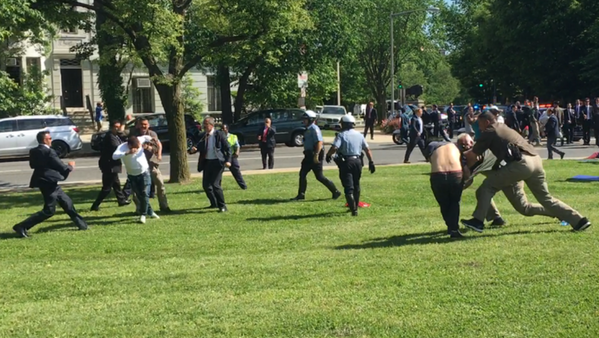 He said they were questioned in the hospital by the Secret Service, which issued a statement saying "The Secret Service fully respects individuals [sic] First Amendment Right to free speech and the right to peacefully protest. We will continue to work with our partners at MPD and the State Department to aggressively pursue accountability for those involved in yesterday’s protests."

While the Secret Service did not mention the Turkish security forces, the State Department was more direct.

"We are concerned by the violent incidents involving protestors and Turkish security personnel Tuesday evening. Violence is never an appropriate response to free speech, and we support the rights of people everywhere to free expression and peaceful protest," said State Department spokesperson Heather Nauert in a statement. "We are communicating our concern to the Turkish government in the strongest possible terms."

Anadolu Agency, a Turkish news service, reported that members of Erdoğan’s security forces were involved in the attack. The Turkish Embassy issued a response on the evening after the incident:

“Groups affiliated with the PKK [Kurdistan Workers Party], which the U.S. and Turkey have designated as a terrorist organization, gathered yesterday without permit in Sheridan Circle in the immediate vicinity of the Ambassador’s Residence, while the President of Turkey was visiting the Residence. The demonstrators began aggressively provoking Turkish-American citizens who had peacefully assembled to greet the President. The Turkish-Americans responded in self-defense and one of them was seriously injured. The violence and injuries were the result of this unpermitted, provocative demonstration. We hope that, in the future, appropriate measures will be taken to ensure that similar provocative actions causing harm and violence do not occur.”

The incident comes exactly a month after Donald Trump called to congratulate Erdoğan on a narrow victory in a referendum that would rewrite the constitution, allowing Erdoğan to assume total authority and eliminate the parliamentary system.

At the time, the State Department called on the Turkish government “to protect the fundamental rights and freedoms of all its citizens,” even though the Turkish regime had been engaged in an authoritarian dismantling of democracy for some time.

Kurds were especially outraged by Trump's support of Erdoğan.

But Arya also thinks it could be a wake-up call for Americans. "In one way I was happy that happened because I would like the American people to see what the Kurdish people are dealing with. If they do things here like that, what they do in their own country in Turkey...where there is no media, there is no journalists?" he asked.

According to a Guardian report, 173 media outlets have been shut down since the state of emergency following a failed coup last year and more than 150 journalists have been imprisoned. Kurdish outlets have been hit particularly hard and Kurdish reporters are often arrested while covering protests.

After the arrest of journalist Deniz Yüce in February, Amnesty International issued a statement saying that “Turkey now has the dubious honor of being the world’s biggest jailer of journalists, and free media in the country is in its death throes.”

Never one to be outdone, Trump allegedly asked then-FBI director James Comey to jail journalists, according to a New York Times report released on the same day as Erdoğan's visit to the White House. According to the Times’ sources, it was the very first thing Trump asked Comey, in their February meeting, even before asking him to drop the investigation of Michael Flynn, the former National Security Advisor who was also an agent of the Turkish state—without ever revealing it.

The White House has not commented on the attack of protesters by foreign security forces.

"I couldn’t believe that happened here in the U.S.," Arya said. "I know how racist [the Turkish security forces] are, how fascist they are, but I didn’t believe that happened here in the U.S. where we are protected by police. We are American citizens. My daughter she was born here. I am American too, you know. I still can’t believe it. We run from these guys in Kurdistan, came here to have a peaceful life, have a decent life."

Democracy in Crisis is a syndicated column, a podcast, and a daily blog.