Skip to content
Just Us: Poly's Championship Season in Photos 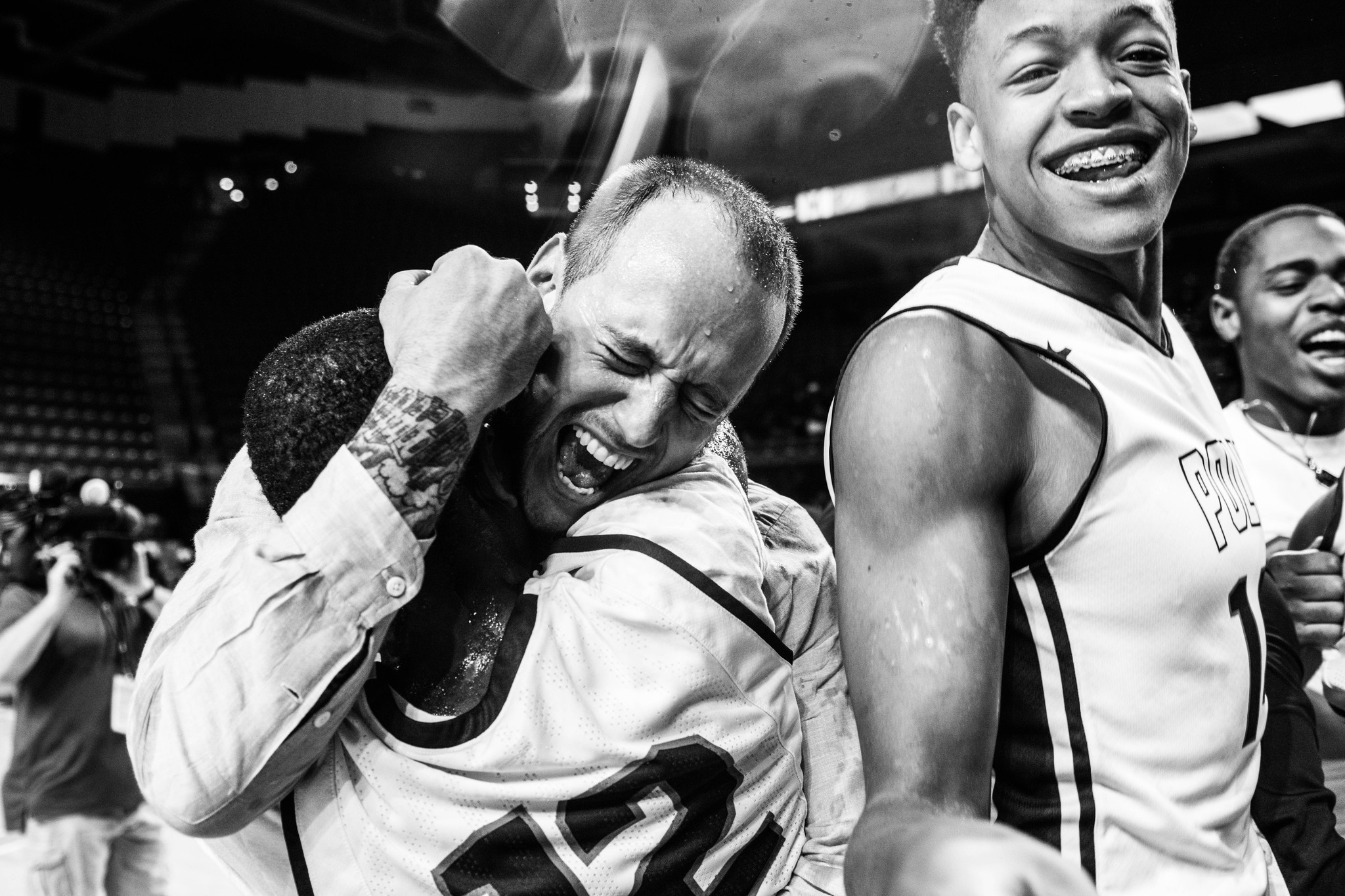 thletes usually give contrived postgame responses to questions from the press. The remarks, usually marked by political correctness and brevity, reflect the public relations side of sports culture: the meticulous crafting of a non-controversial personae that can sell products and not get anybody in trouble, all at the sacrifice of the individual and an understanding of the person outside of the context of sport.

This restrictive media conditioning begins early though, both by the schools and even by the athletes themselves, who absorb being an opinion-less, personality-free, sports-playing robot by watching their favorite athletes offer non-answers. There's more there than these rote answers, and that is the driving force behind this photo essay documenting the 2016-2017 men's varsity basketball team at .

Since September 2016 I've been going to almost every study hall, every practice, every team outing, and every game. What I learned is that basketball is just the conduit through which each player matures both on and off the court. During practice, the gym is a safe space and an incubator for the guys to learn vital life skills in their transition into adulthood while still enjoying the spoils of being young and somewhat carefree. It's where these guys get to be themselves unapologetically and where coaches double as mentors. The gym during games is not only where points are scored, where referees police the game and its players, where fans bet in the stands and heckle the players, but where these young men self-actualize despite a myriad of rules and distractions. In Poly basketball we see that sport, much like art, is a reflection of everyday life.

Photographs of action come a dime a dozen in a season; it's the smaller details that matter most to me.

How invested Coach Fitz is in the growth of the forwards and centers, developing their mental and physical toughness in an evolving game where so much emphasis is placed on guard play and finesse. The way Jeanette Wooten handles everything from coordinating team-building exercises to senior day festivities. Coach Dominic Harrison holding all referees accountable. Dr. Yves Joseph on hand at every game helping out with nagging injuries. Sid McNairy leading yoga exercises for mental and physical wellness.

The bromance between seniors Kyshon and Torrin, characterized by daily non-stop bantering, post-practice games of one-on-one, and inside jokes. Kyshon's love of mixed berry fruity snacks. Baby Cleve, who never sticks to one hairstyle—he went from a long mohawk to curls to trying to get his waves spinning—embracing his role as lockdown perimeter defender, and his season-long quest to obtain his provisional driver's license. Seth's affinity for "Pokemon Sun" and "Pokemon Moon." Rah scowling and talking trash to opposing point guards like Gary Payton would as he becomes a floor general in just his freshman year. Mani, who loves Lil' Uzi Vert and slain Baltimore rapper Lor Scoota, learning to be more assertive. Jabray and Jeff taking a liking to photography and journalism as they cultivate other interests outside of sports with college on the horizon. Meaty dancing and singing early 2000's R&B in the locker room. Herb, the quiet leader, encouraging his teammates, cutting the light off every time he leaves the locker room screaming YFN Lucci's bird call-like ad lib from 'Key To The Streets.' Demetrius embracing defense more and becoming more of a complete player heading into his senior season next year, brushing his hair for 45 minutes, getting more comfortable brushing with the left hand as he looks to be more ambidextrous. Deshaun's hot and cold demeanor that complicated his season but offered him valuable lessons that will serve him going forward. Dre, who is the best player on the team, standing out while preparing to play on a bigger stage next year at Temple University.

And head coach Sam Brand's passion for basketball shining through as he sweats through his shirt, jumping around with unfettered enthusiasm on the sidelines.

You cannot get all of this in a brief post-game press conference or post-game interview.

The 2016-2017 season entered new territory for the ascending Poly program. Last year's city championship made Poly a force to be reckoned with coming into the season. We all know that with success comes outside pressure and distractions that can compromise the morale of the team. Instead of succumbing to potentially coercive chatter throughout the city and beyond, the team adopted a new "Just Us" mantra to complement the "Our Family vs Your Team" slogan that adorns the backs of team shooting shirts and other pieces of team apparel. Coach Sam crafted a rigorous early season schedule, facing nationally ranked teams like Simeon Academy in Chicago—the school that produced NBA standouts Derrick Rose and Jabari Parker—the H.D. Woodson team which ranked top ten last year out of Washington D.C., and Imhotep Academy in Philadelphia, which MaxPreps currently has listed as the third ranked team in the nation.

Tough losses and close games against stiff competition early on in the season built on-court character through adverse situations. A 42-40 loss in the city championship game against Patterson galvanized Poly with a renewed energy heading into the state playoffs, trouncing each opponent by an average margin of 33 points before winning a nerve-wracking state championship game against Potomac 64-63. The team's poise in the waning moments of the game was a reflection of the growth from the seven losses on the season.

In the end, this Poly basketball team brought the state championship to 1400 W. Cold Spring Lane—the first in the school's 134-year history. 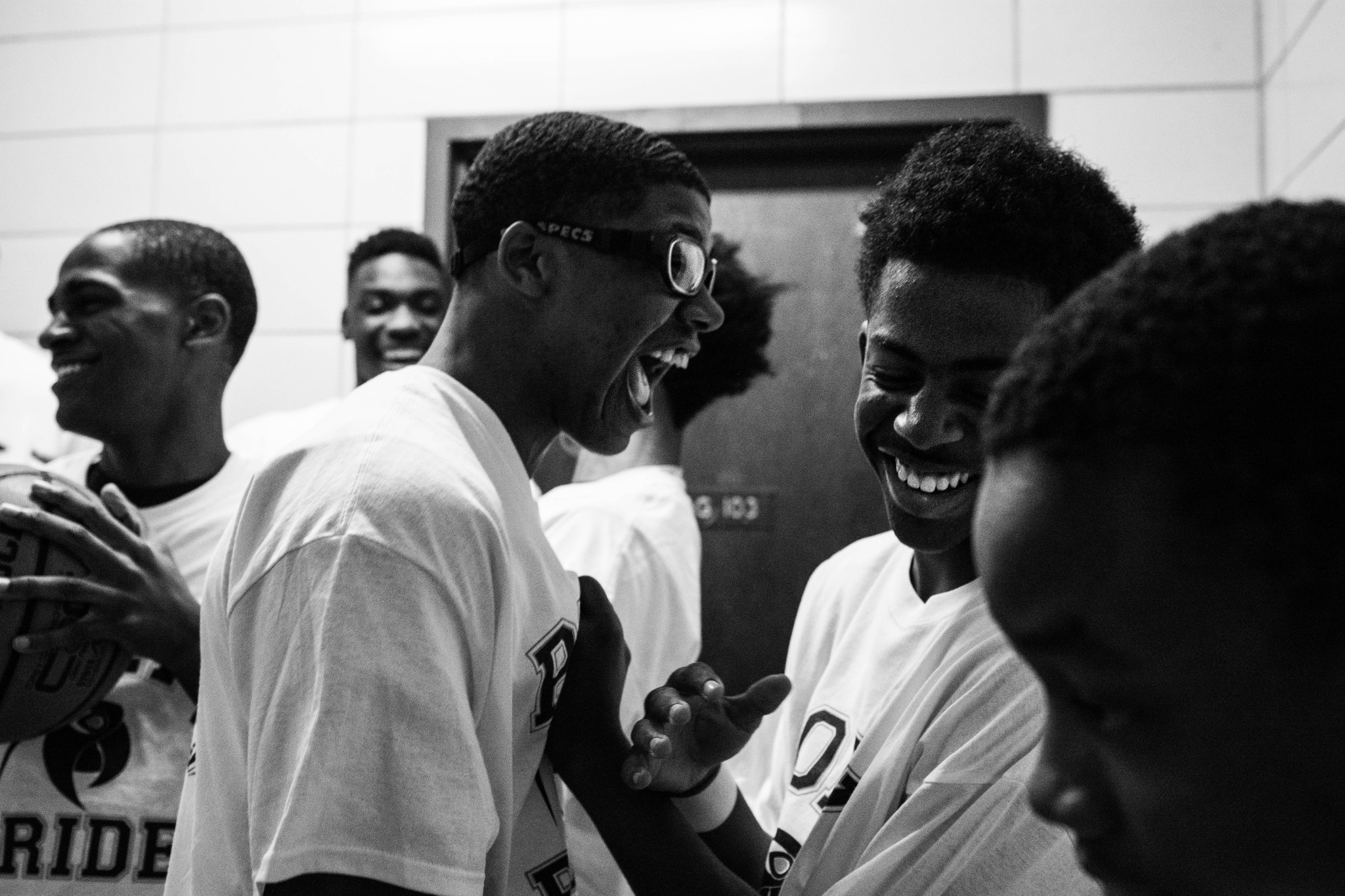 Juniors Seth Jones and Jeffery Alexander get pumped before the first game of the season. 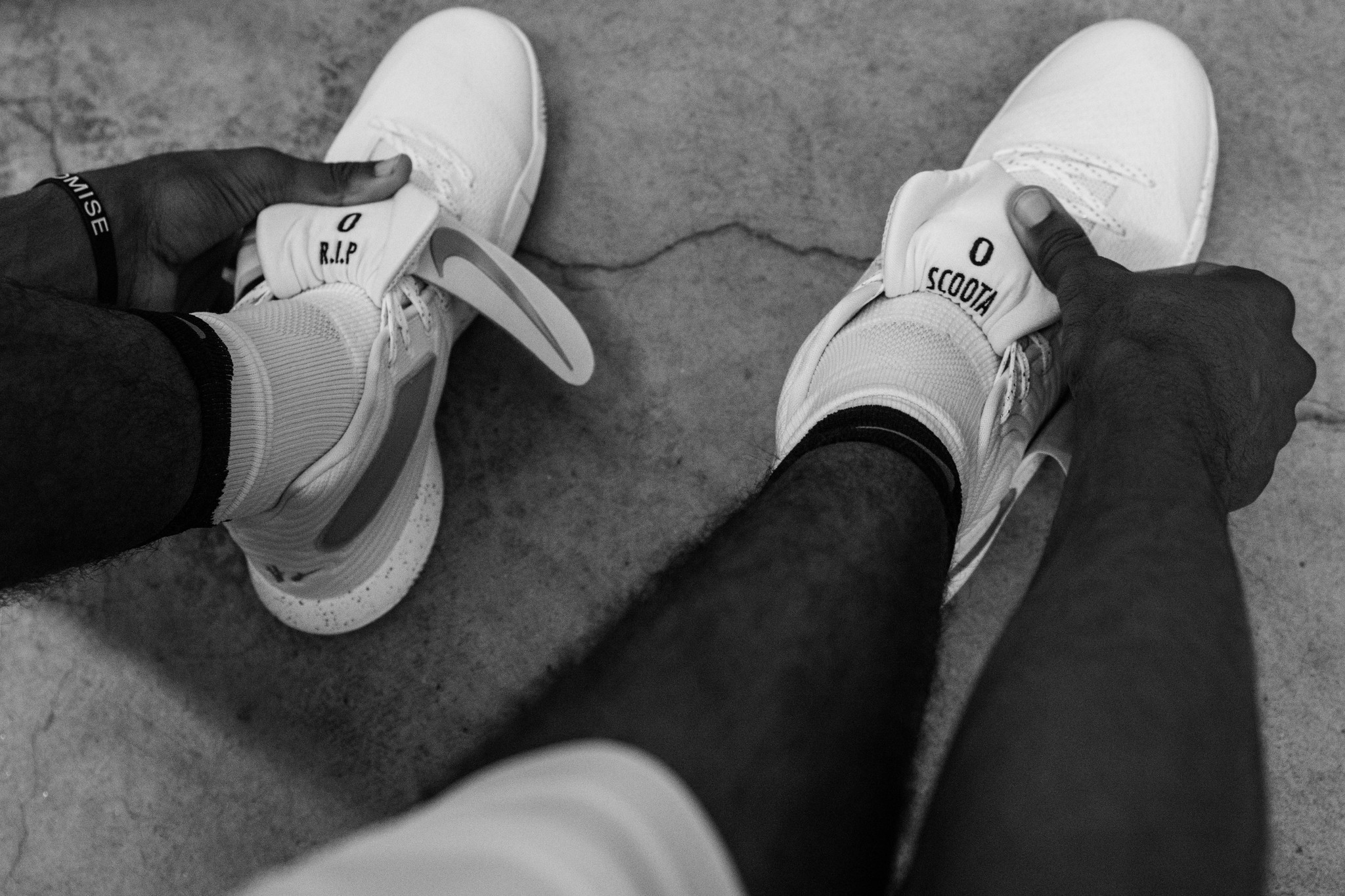 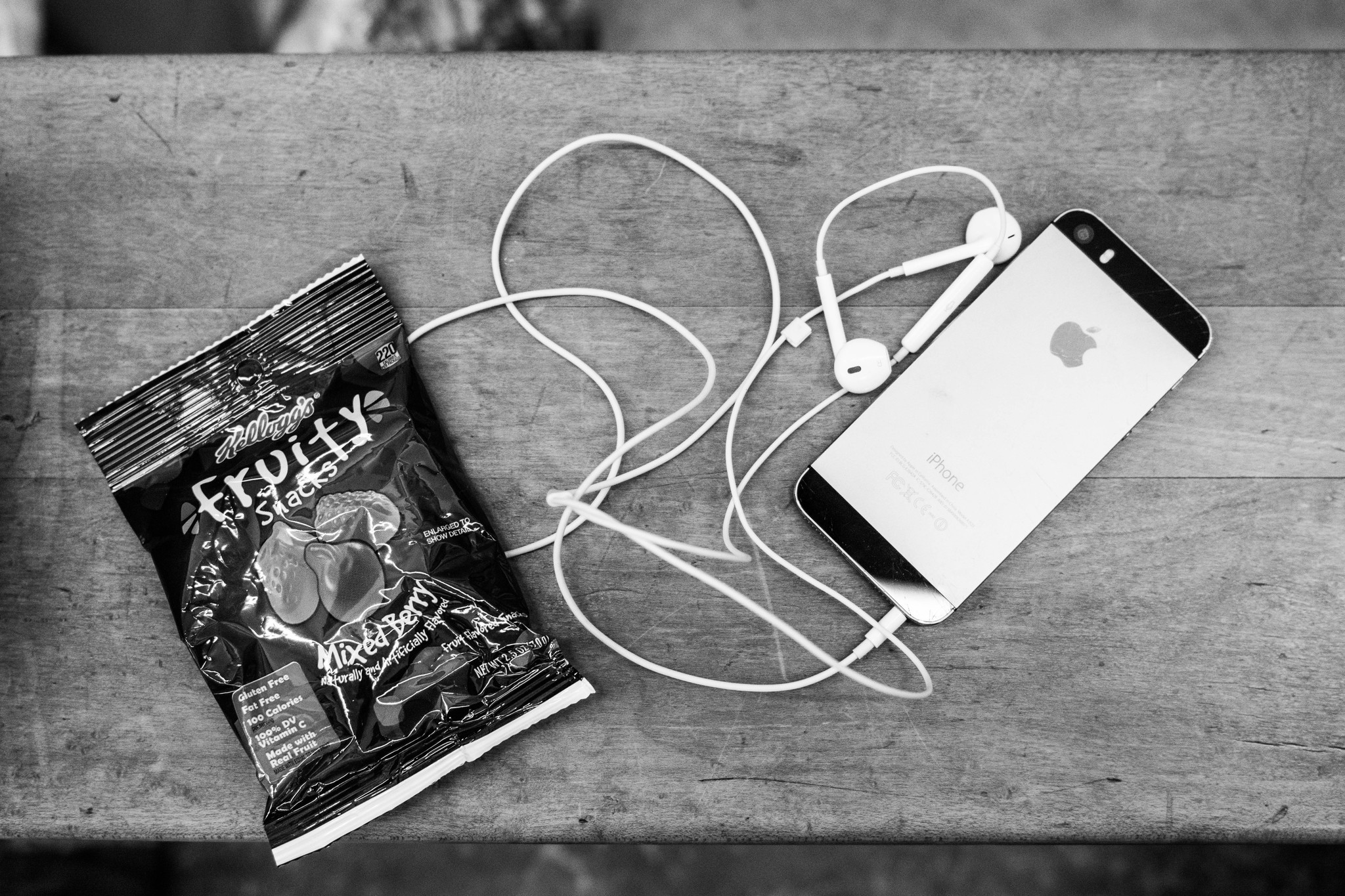 Before each game senior Kyshon Tate makes it a point to eat a bag of mixed berry fruity snacks and listen to music. 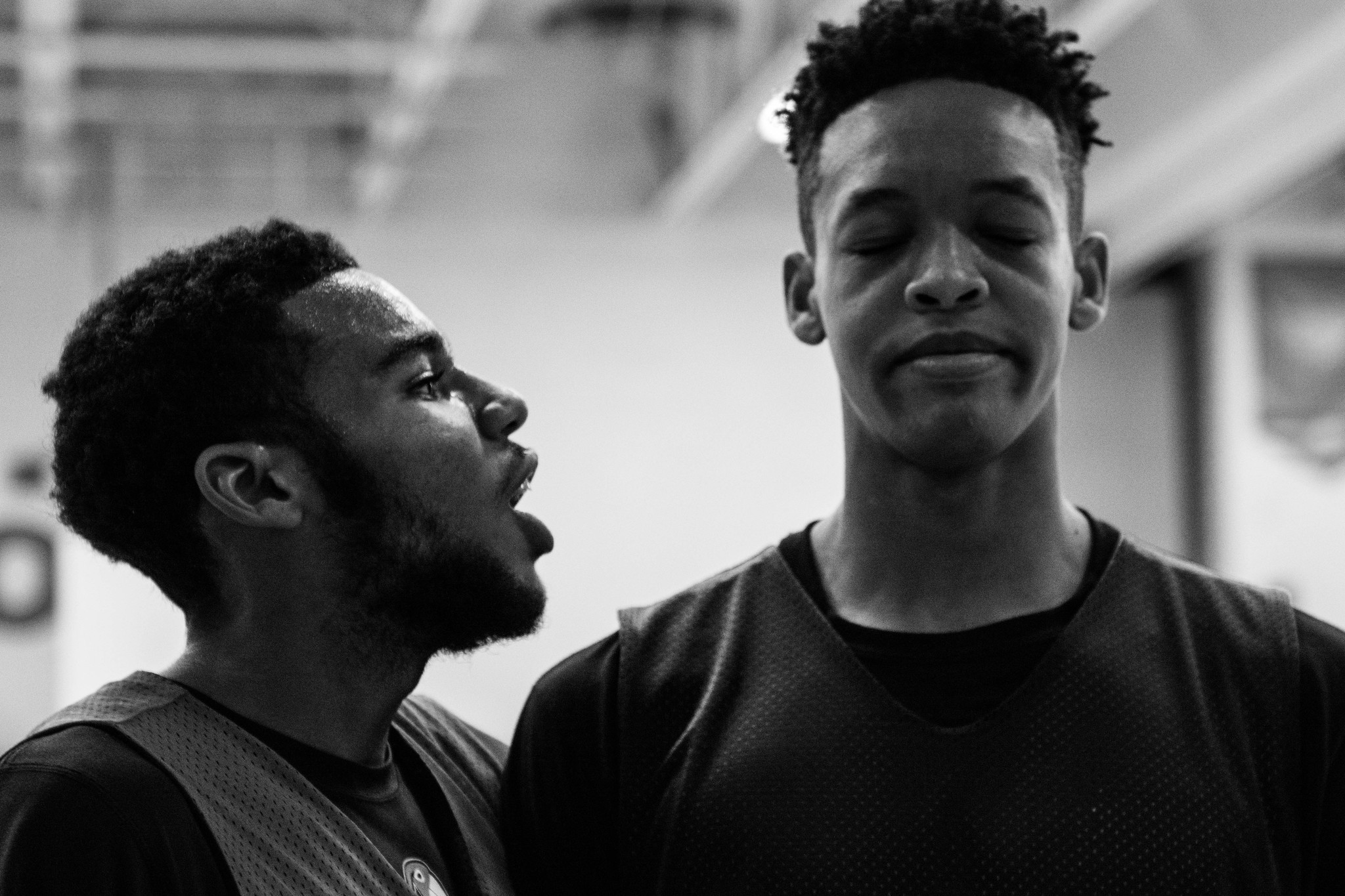 Torrin talks trash to Kyshon in practice and in study hall every day. 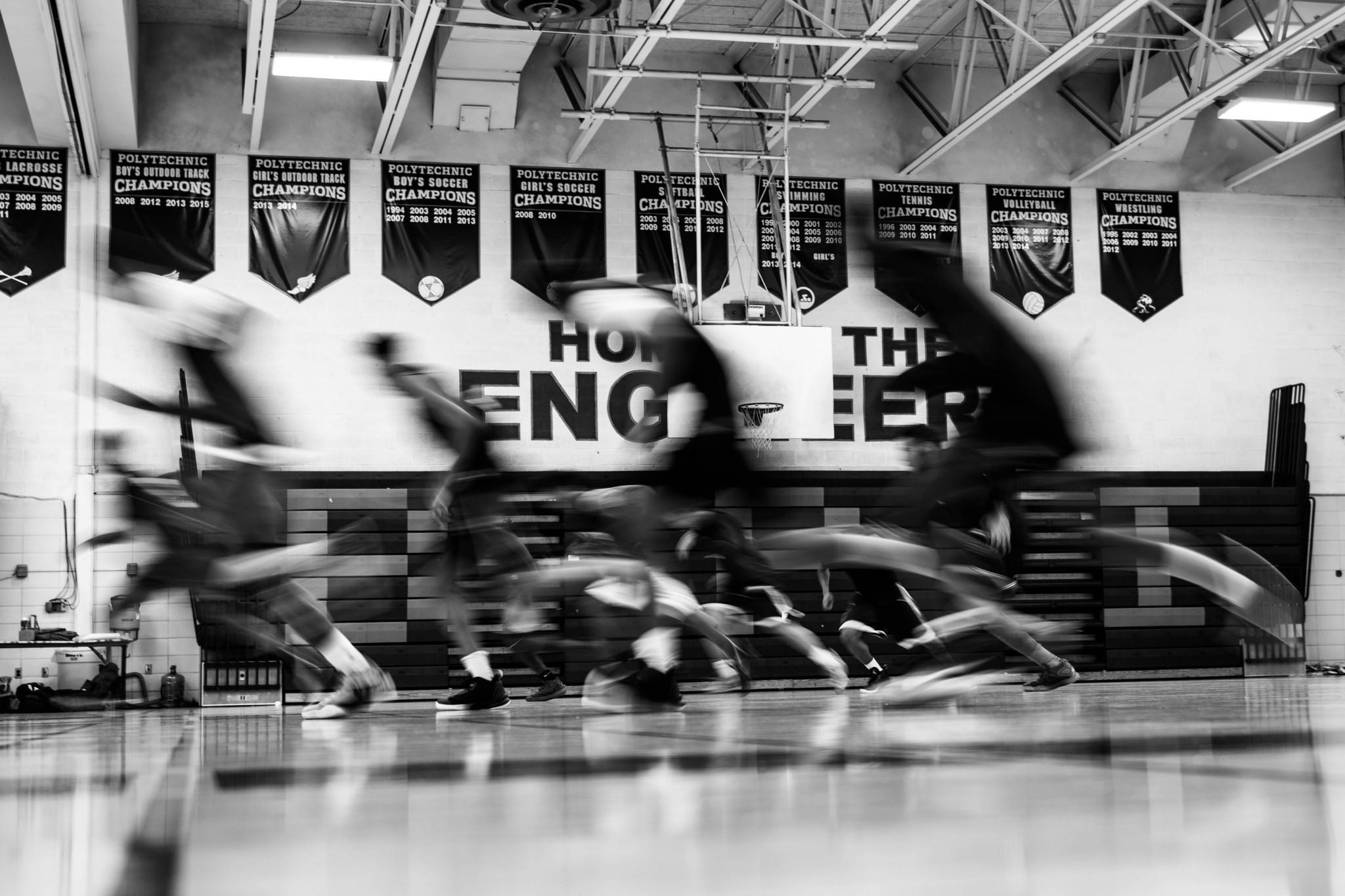 The team runs suicides to stay in top shape throughout the season. 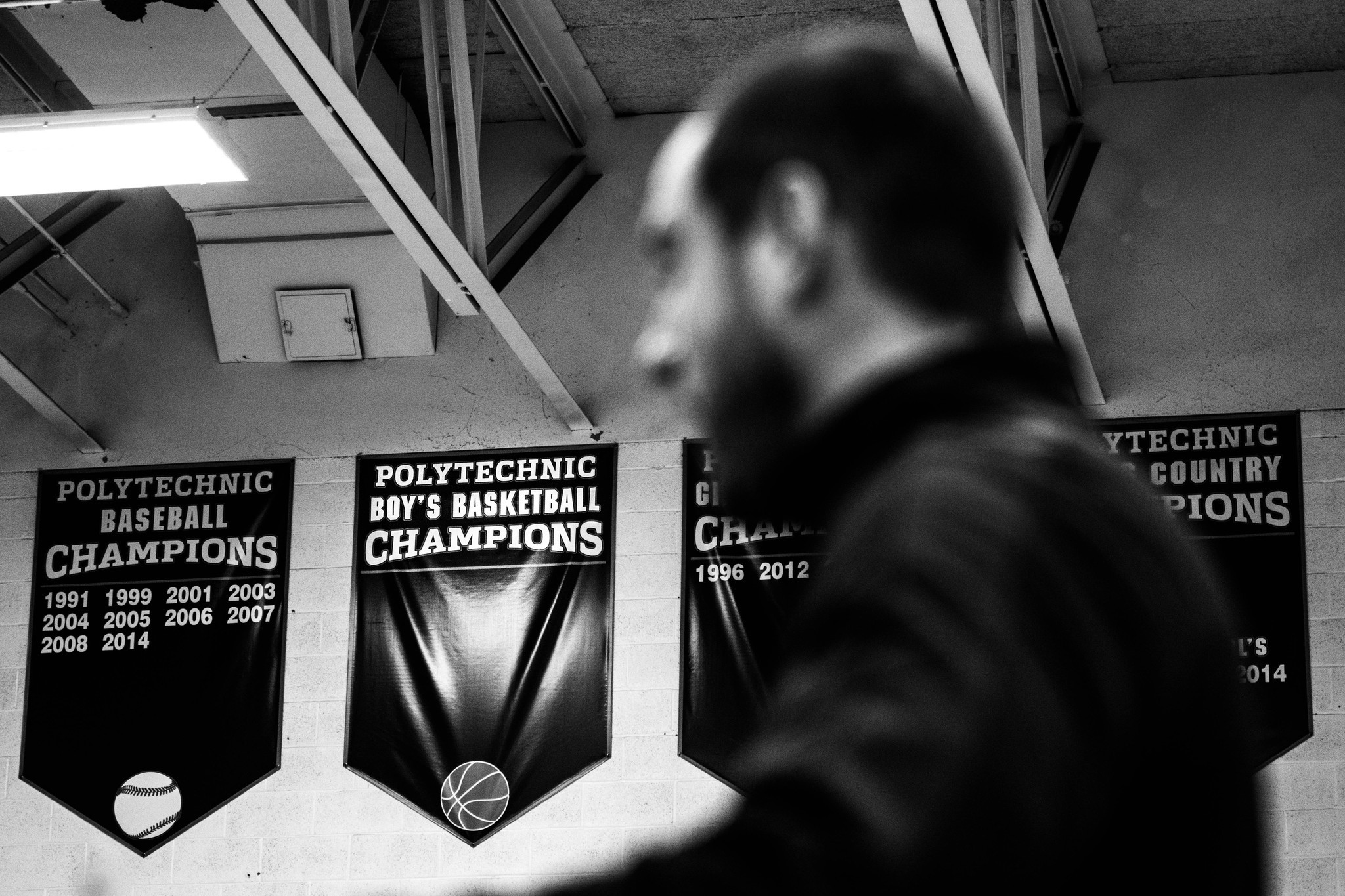 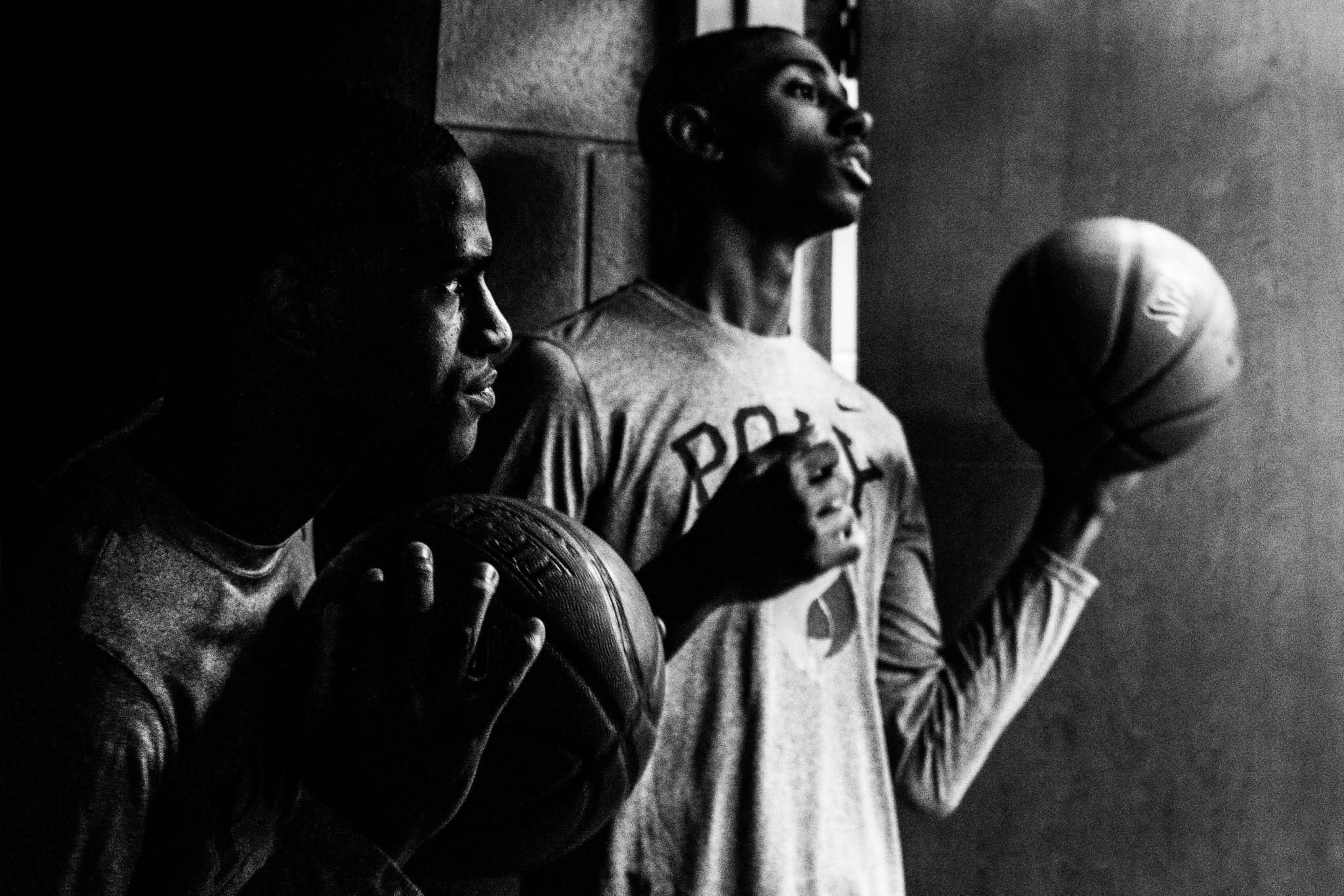 Freshman Rahim Ali and junior Demetrius Mims watch the junior varsity team from the locker room as they head into an overtime period. 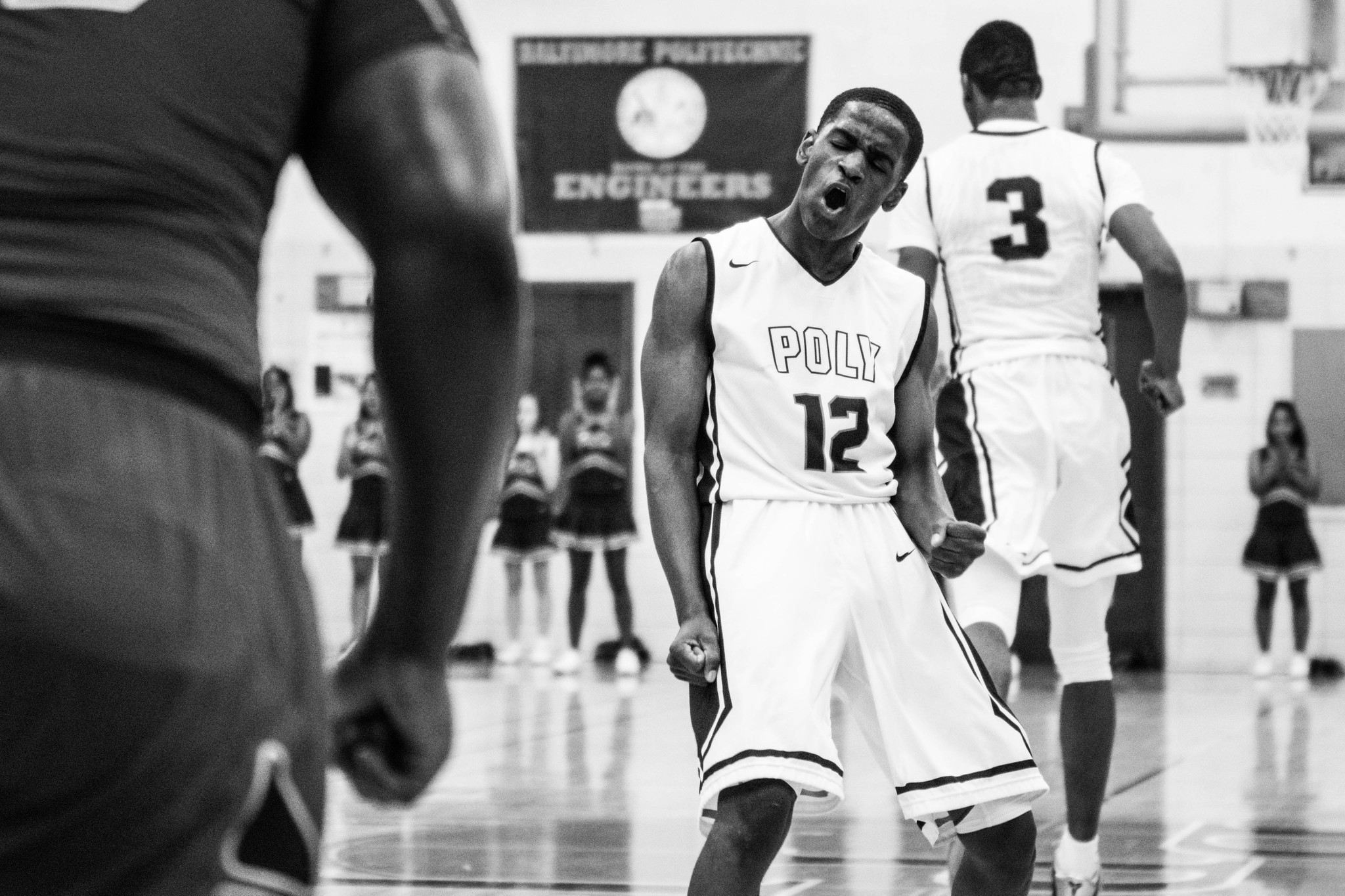 Freshman Rahim Ali uses basketball as a way to express both his joy and frustration. 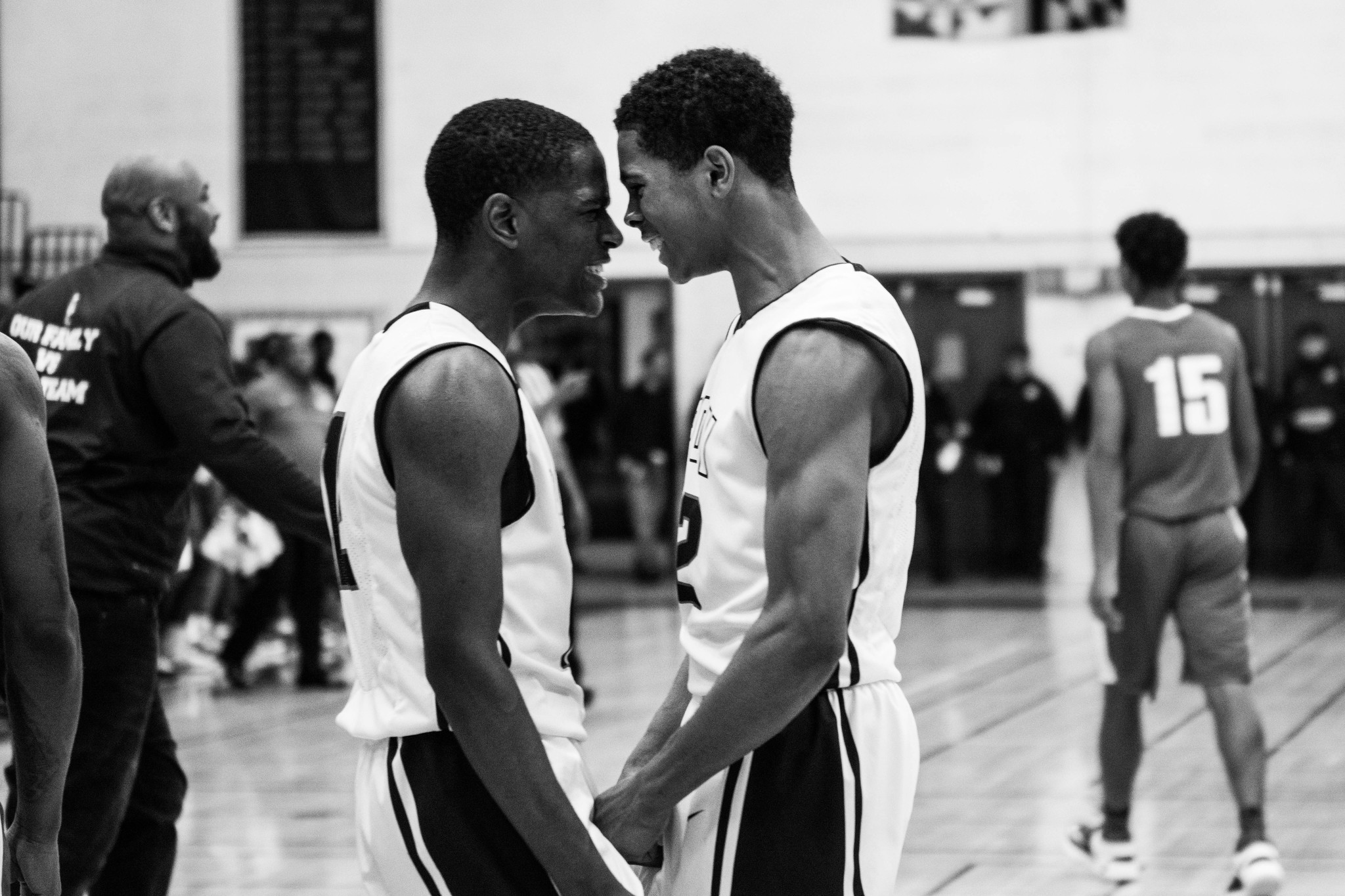 Freshman Rahim Ali and Junior Cleveland Horton celebrate with one another following a surge against Simeon Academy. 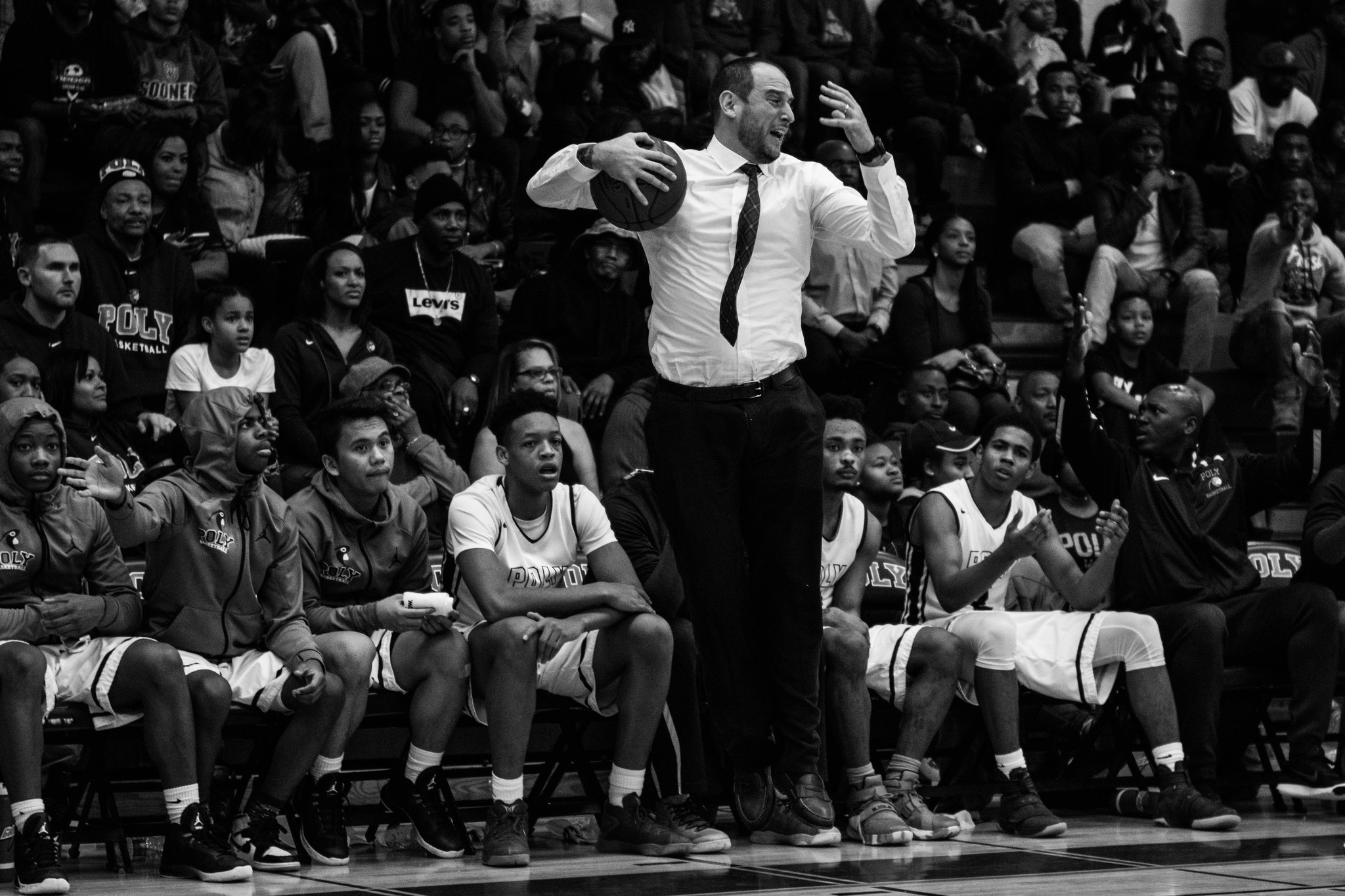 Coach Sam angrily jumps after a questionable call during a game against Chicago's Simeon Academy. 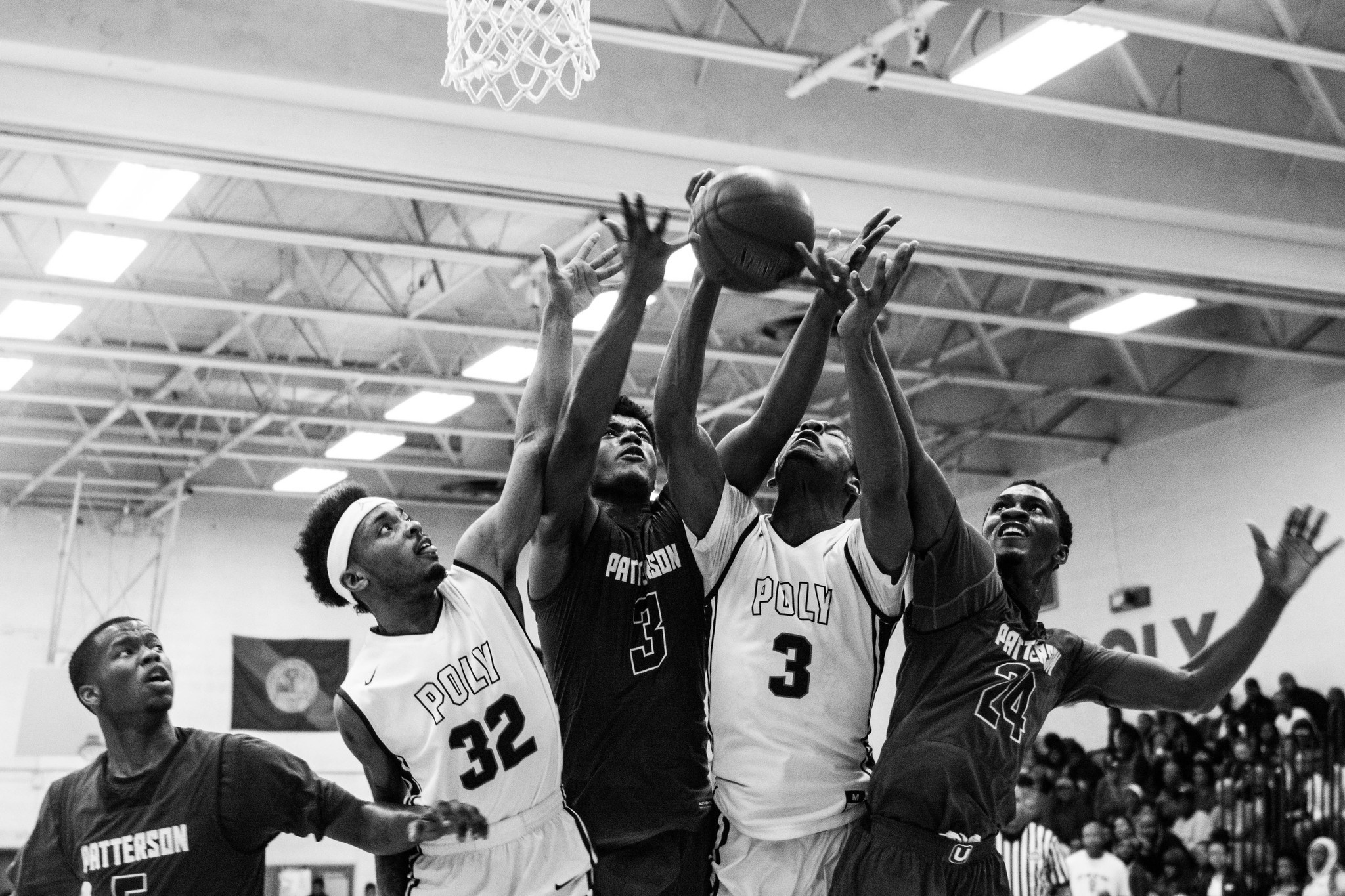 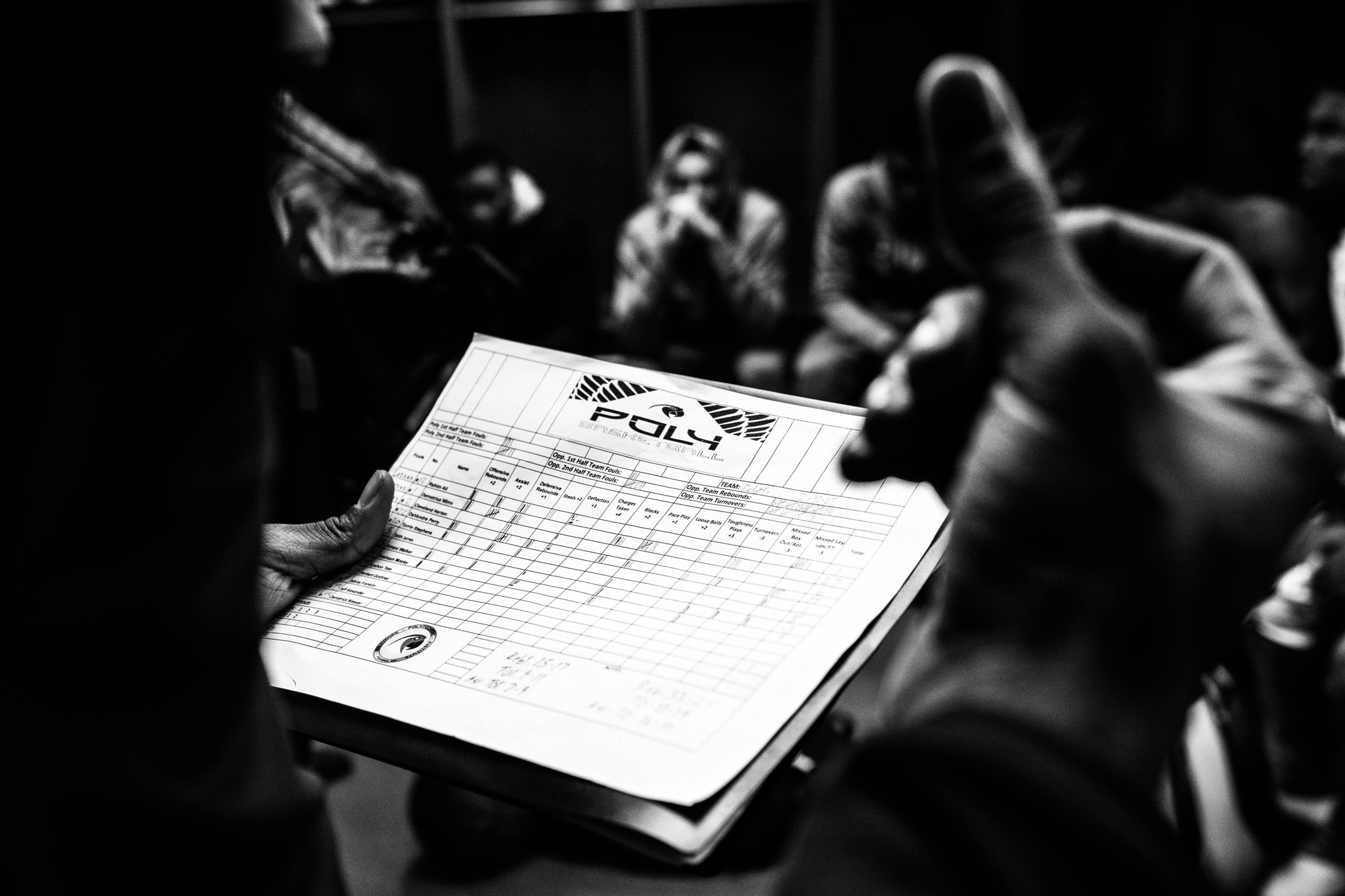 During each game, Coach Bilal keeps a “hustle chart” which tallies effort plays and plus-minus totals for each player. 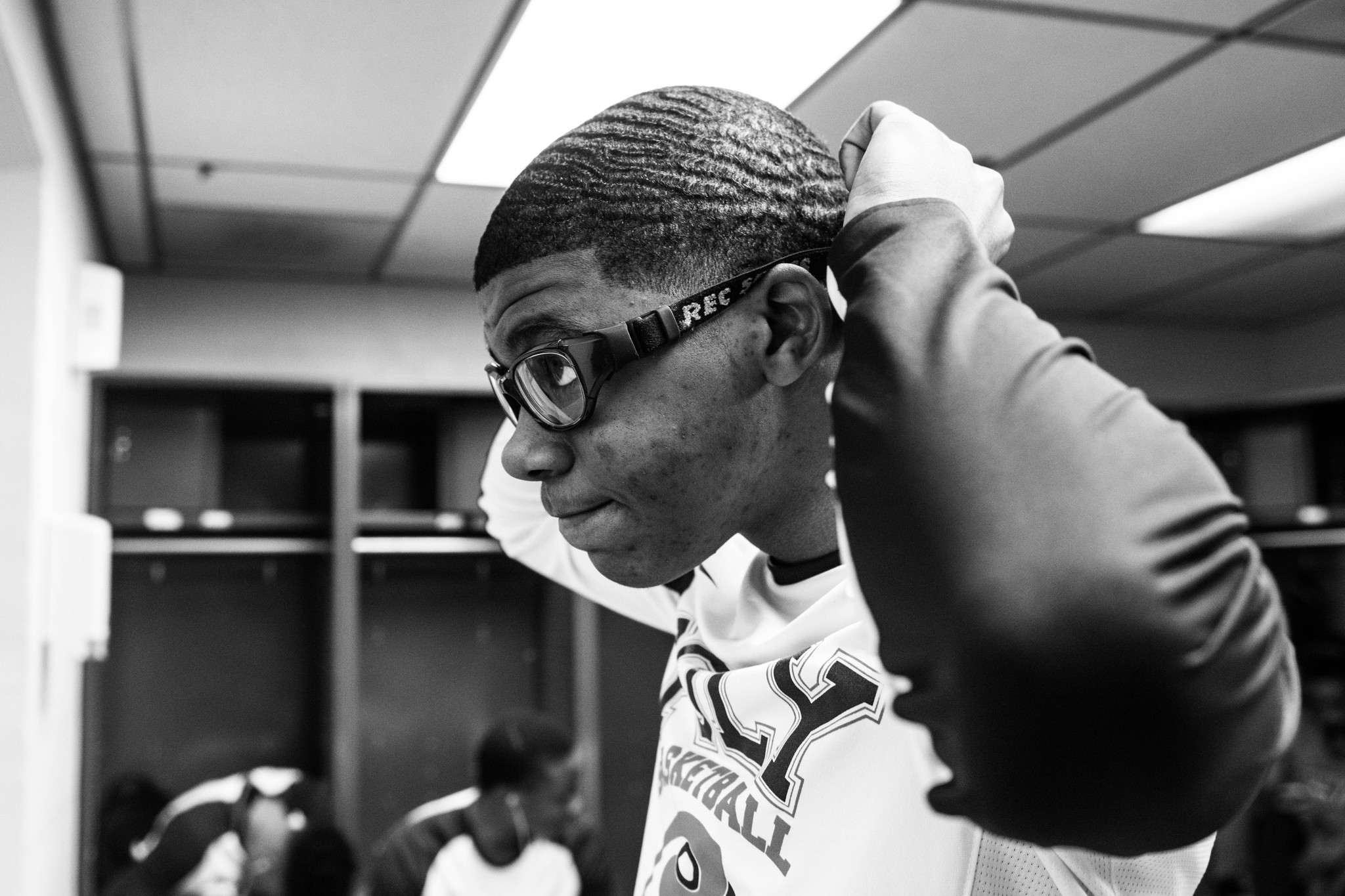 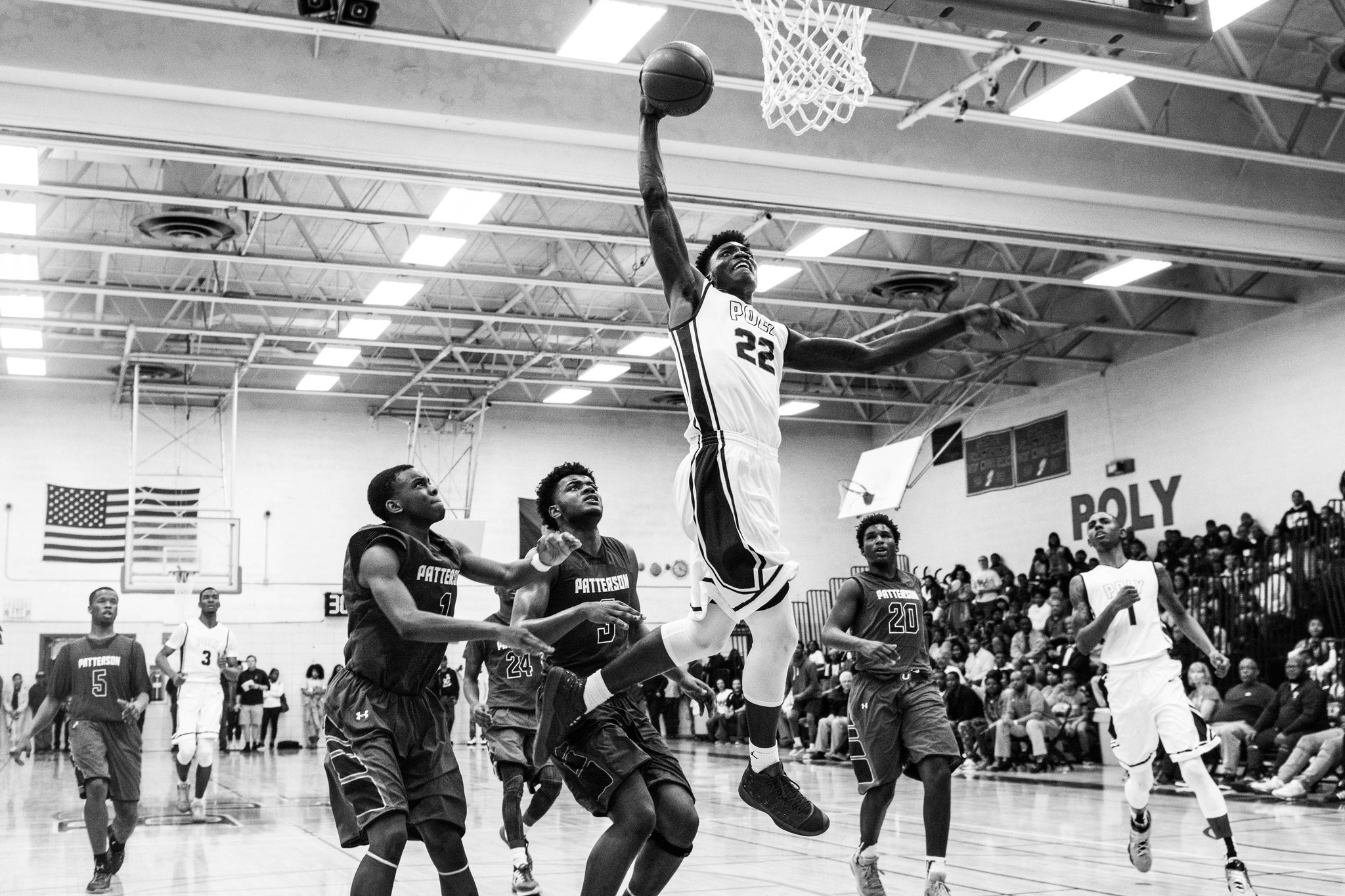 Senior De'Vondre Perry finishes a dunk through a foul against Patterson during the regular season. 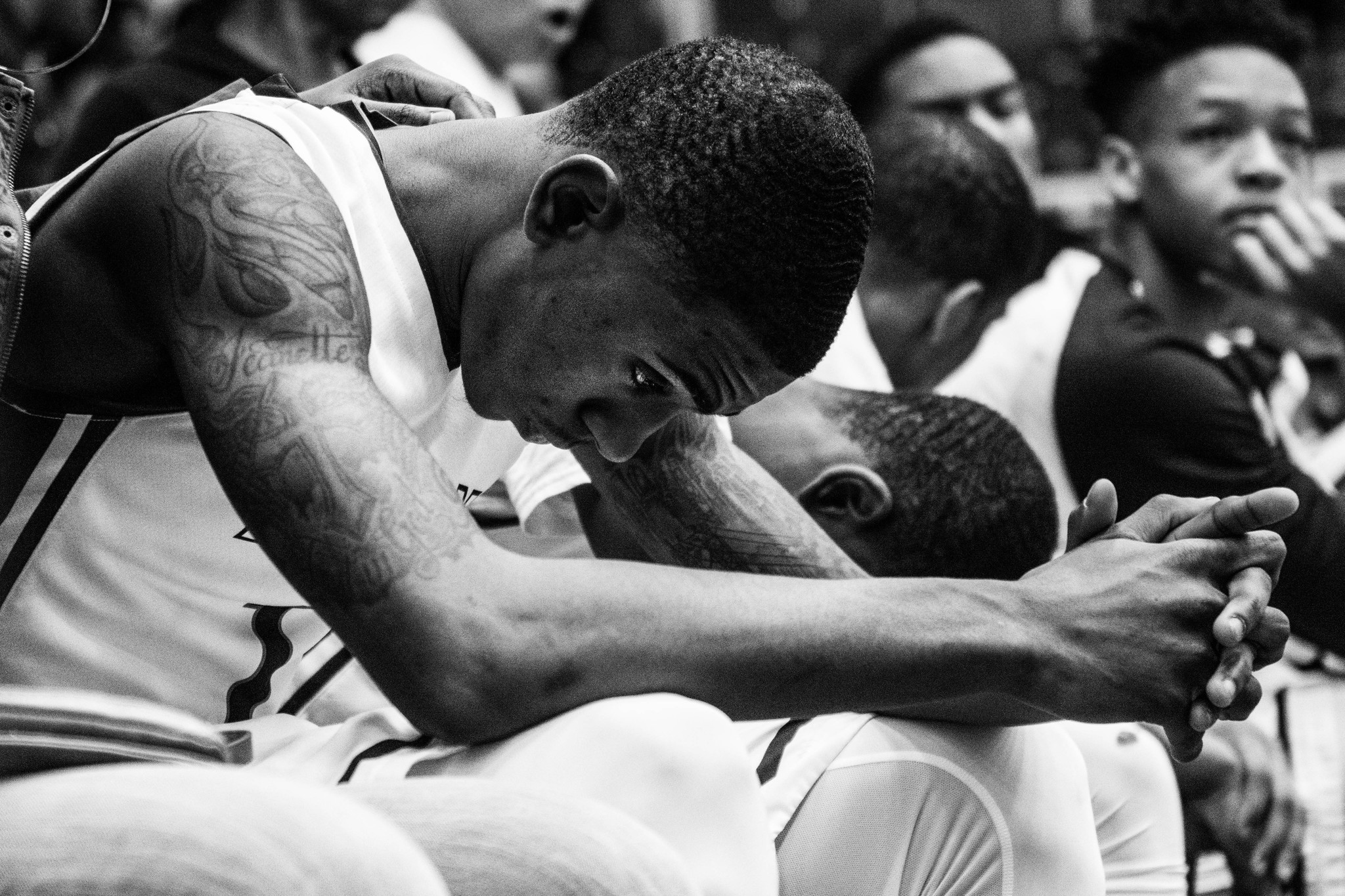 Junior Demetrius Mims hangs his head after the team loses to Patterson in the city championship game. 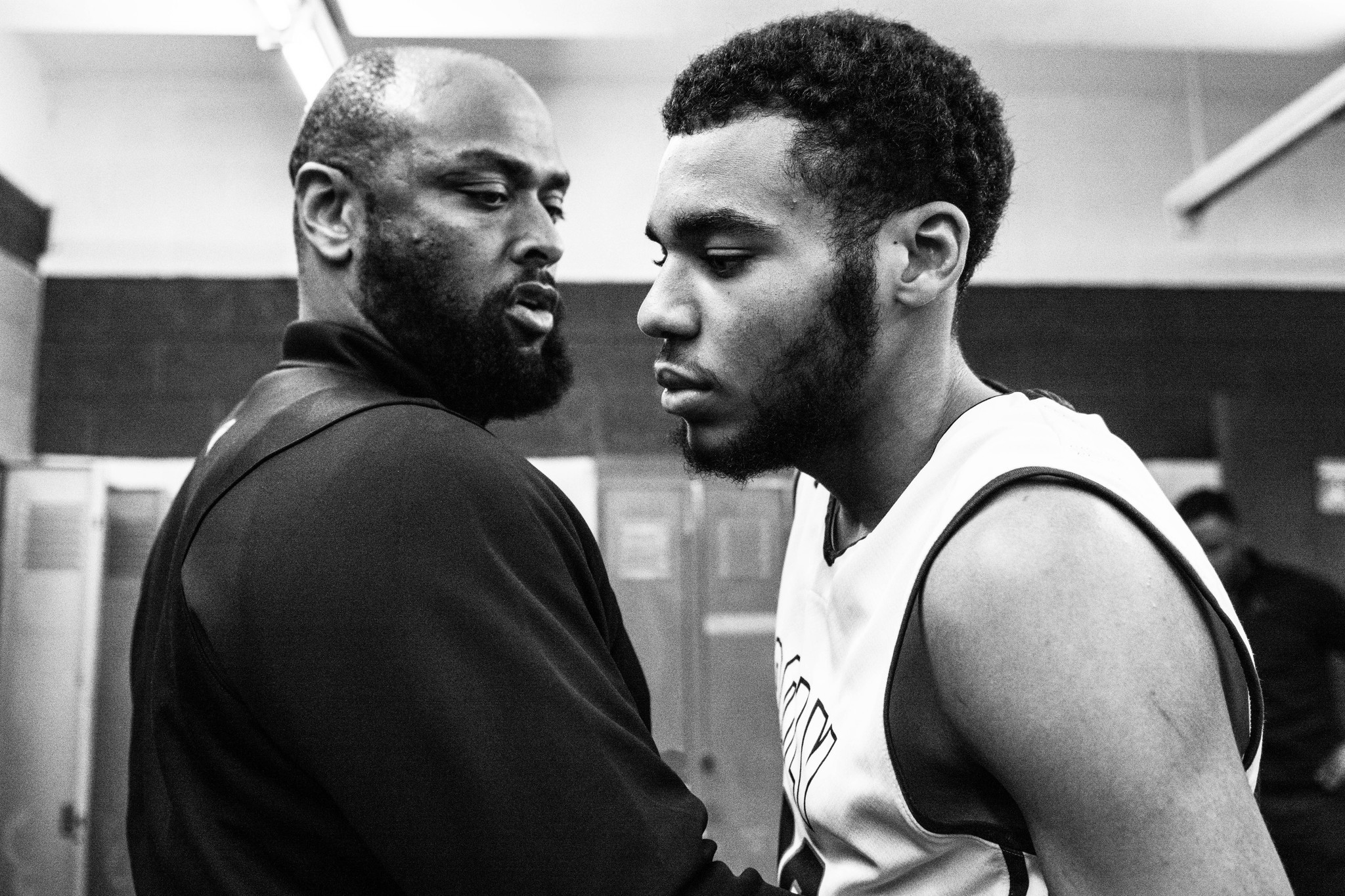 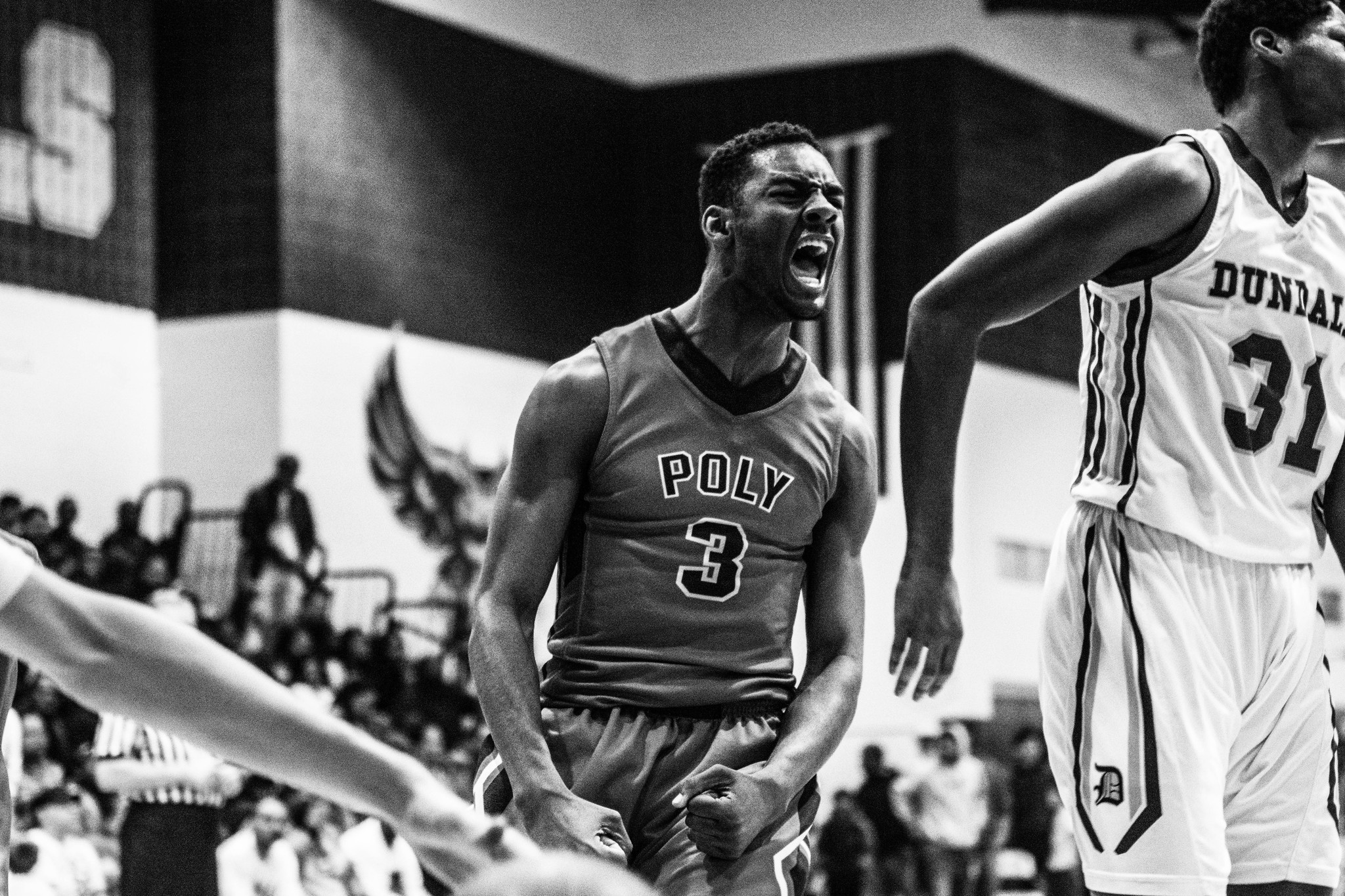 Sophomore Amani Walker yells in excitement as Poly expands their lead against Dundalk in the MPSSAA 3A North Regional Championship. 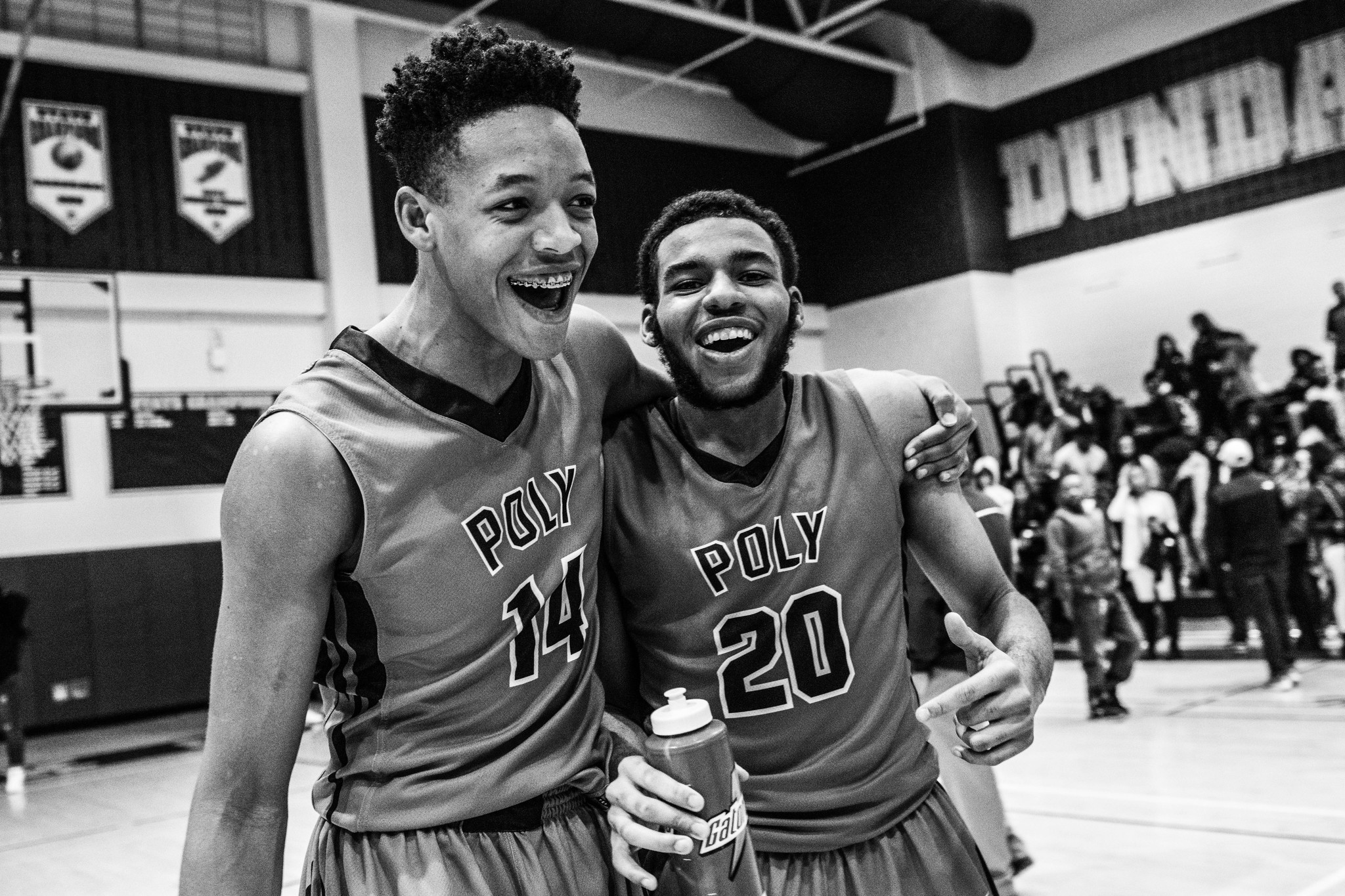 Seniors Kyshon Tate and Torrin Stephens are the first to hug after winning the MPSSAA 3A North Regional Championship. 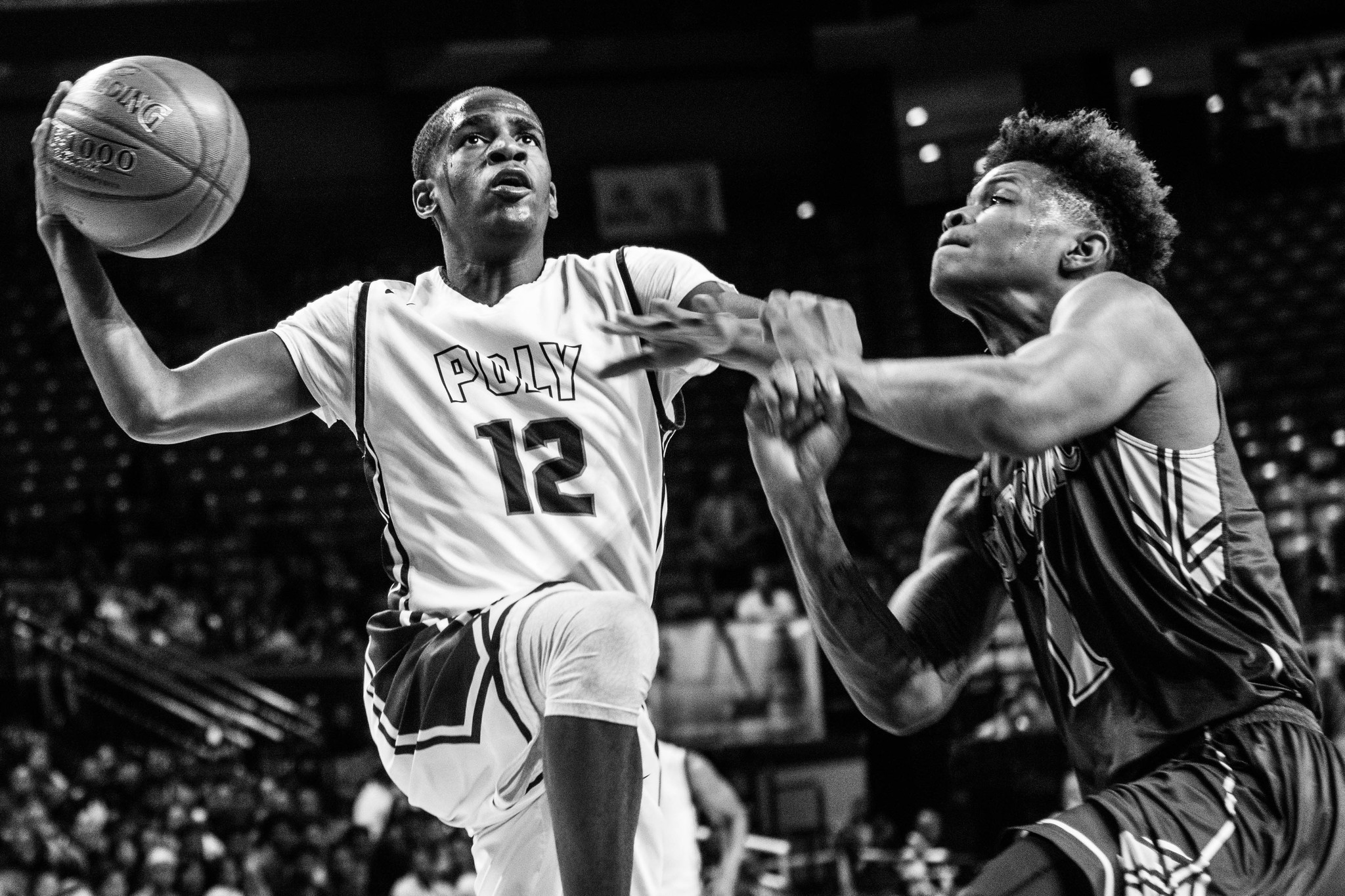 Freshman Rahim Ali glides in for a layup. 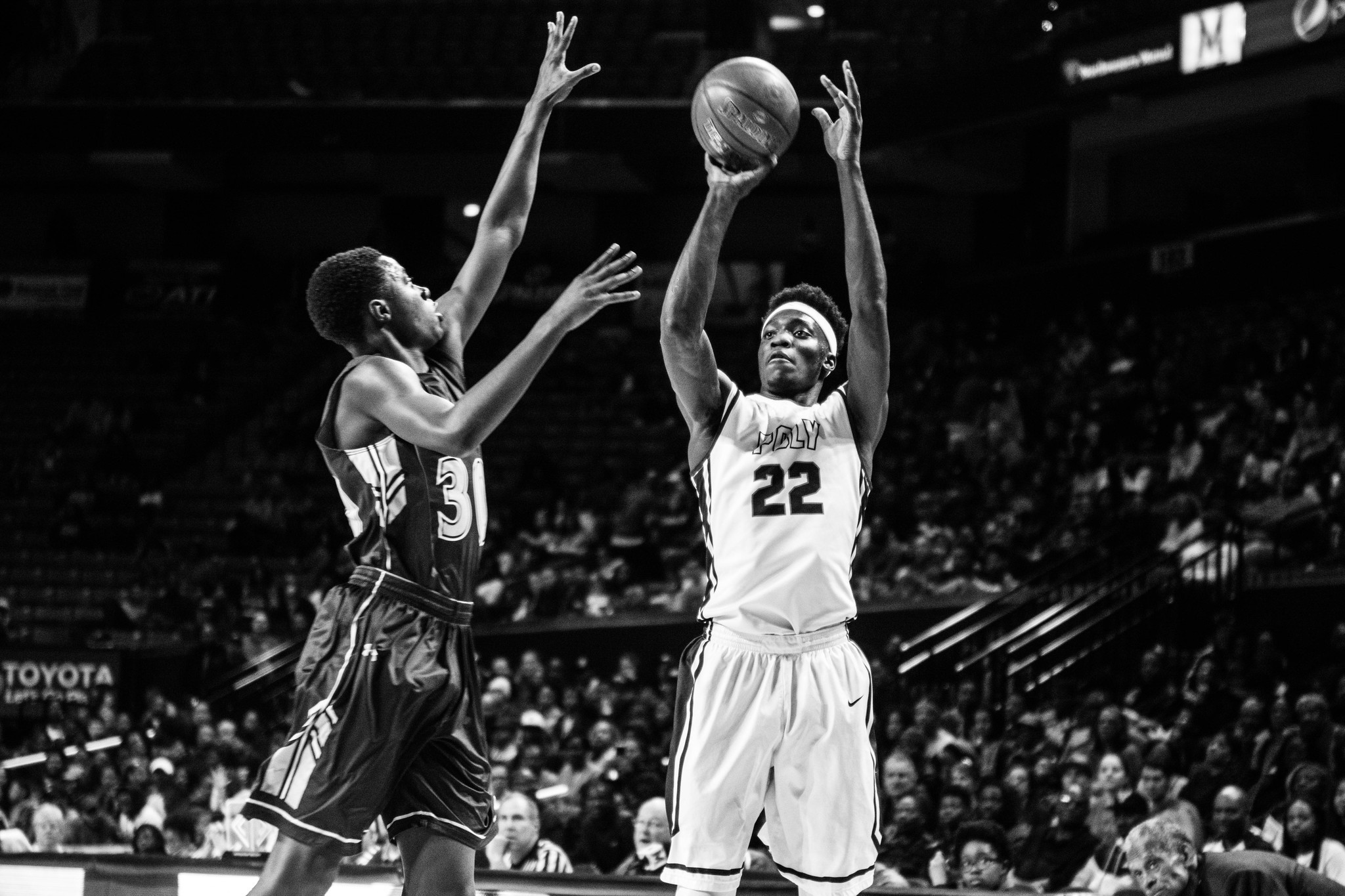 Senior De'Vondre Perry raises up for a deep three point shot during the state championship game against Potomac. 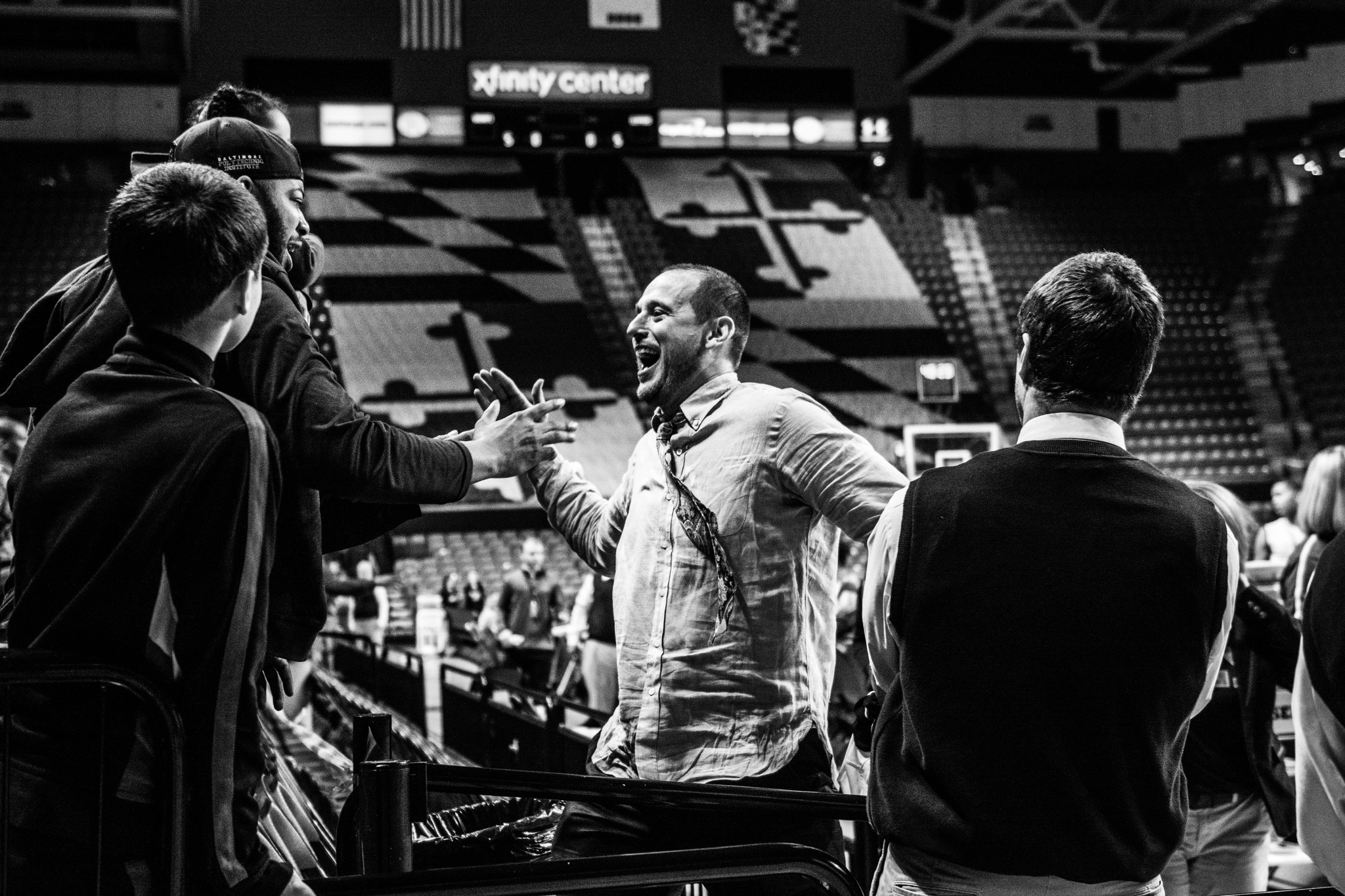 coach Sam celebrating with supporters in the stands, including childhood friend Darvin Cooke, who grew up with Brand in the Walter P. Carter rec center. 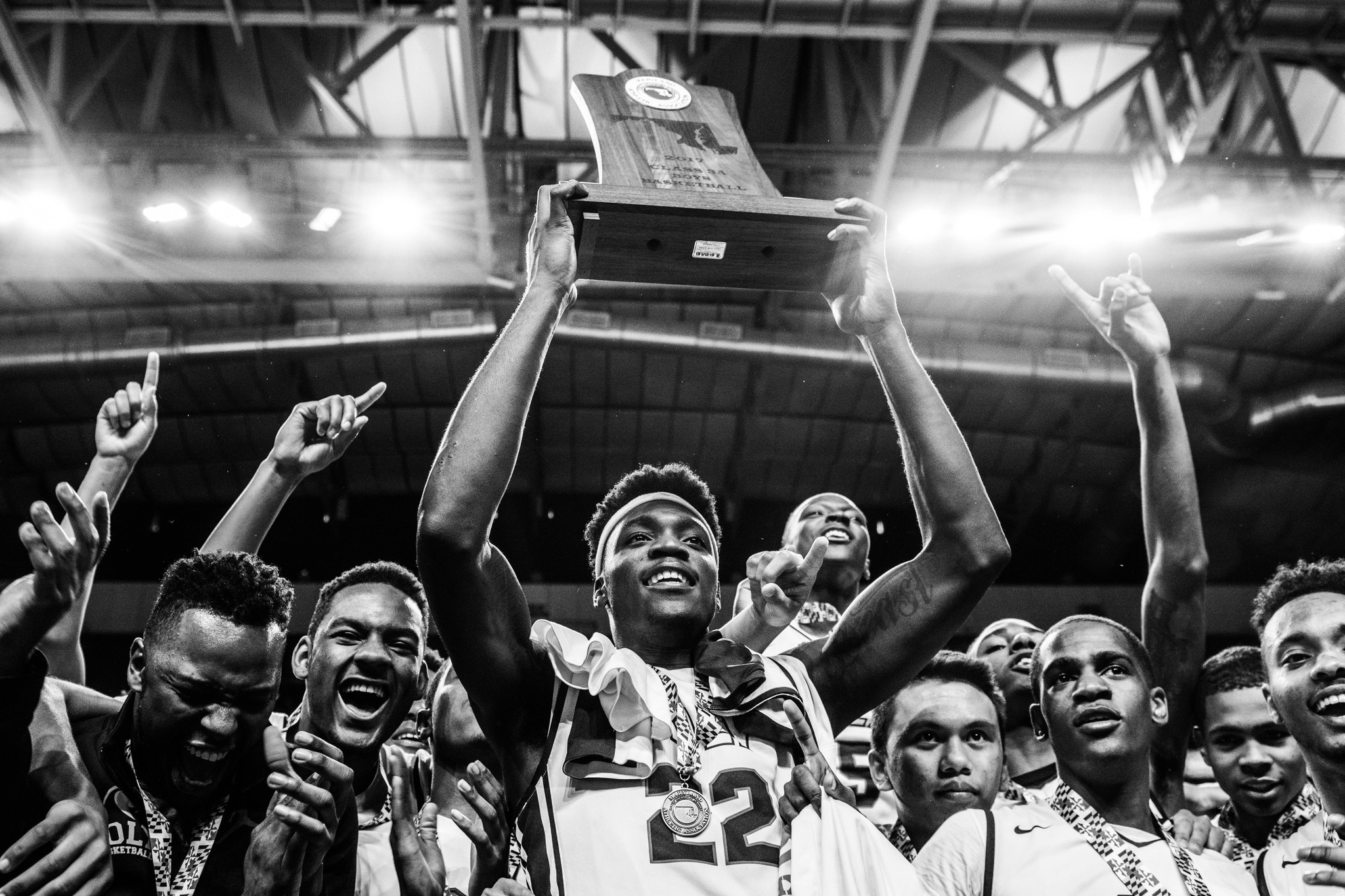