This afternoon, Gov. Larry Hogan held a press conference to announce $1.97 billion in road and bridge projects throughout the state—in every county but not Baltimore City—and untold millions on building the Purple Line for the Washington, D.C. suburbs, but killed the Red Line, the 14-mile east-west transit line the city has long been promised.

The map of road improvements that Hogan tweeted out (he has since deleted it) would be comical if it wasn't so depressing: Baltimore is entirely absent. It looks as if the entire city of Baltimore was swallowed by the harbor. 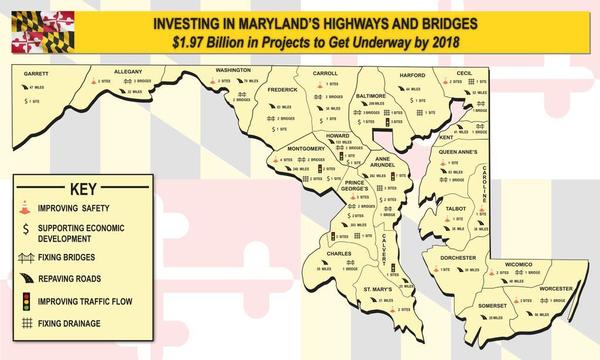 As The Sun reports, the move to cancel the Red Line comes "after years of environmental studies and public meetings and tens of millions of dollars in state spending on design and engineering."

The moves are in line with Hogan's priorities and policy choices in his first year, which have tended to favor the suburbs and rural areas over the city, the rich over the poor, and private over public. For example, the same week he announced cuts to fees on the Bay Bridge, declaring “your summer vacation just got cheaper,” he approved $30 million to build a much-reviled youth jail in Baltimore.

Hogan’s budget increased schools funding by 0.4 percent statewide, but Baltimore City got a 3.3 percent decrease, or $41 million. Meanwhile, tuition rates went up at all public colleges and universities, while tax deductions for donations to private schools went up.