The Wandering Eye: A melee at Baltimore's new casino, income distribution in the city, the history of Labor Day, and more

The Wandering Eye is a new weekday blog series in which members of the City Paper staff give their take on the news of the day.

-People celebrate Labor Day by not working for a day, a tradition that started in the 19th century, when the excesses of unfettered free-market forces were so self-evident that the U.S. Congress and state legislatures started to rein them in, a bit at a time, in order to make working life more humane and productive. No one alive has a first-hand recollection of what conditions were like back then, so perusing the work of Lewis W. Hine—an investigative photographer who chronicled the realities of work in the first part of the 20th century—helps keep those memories alive, especially as they relate to child labor. University of Maryland, Baltimore County has a large collection of Hines' work available online, as do the National Archives and The History Place, and BuzzFeed last year put together a good sampling. They serve as a reminder of why government, despite its deservedly bad reputation, is important. (Van Smith)

-Slate's Jordan Weissmann has been writing about income distribution, finding that New York City's percentage of households pulling in six figures isn't all that much more than the country as a whole—25 percent, as opposed to 22 percent nationwide. So what about Baltimore? The U.S. Census data show six-figure households in Baltimore comprise 15 percent of the total, including just shy of 3 percent raking in $200,000 or more, compared to nearly 5 percent nationally. On the other end of the spectrum, Baltimore's poverty is quite striking compared to the country as a whole: A third of its households scrape by with less than $25,000, compared to about 23 percent of all U.S. households. The share of Baltimore households making between $35,000 and $50,000, meanwhile, is exactly the same as the entire country's: 13.7 percent. (Van Smith) 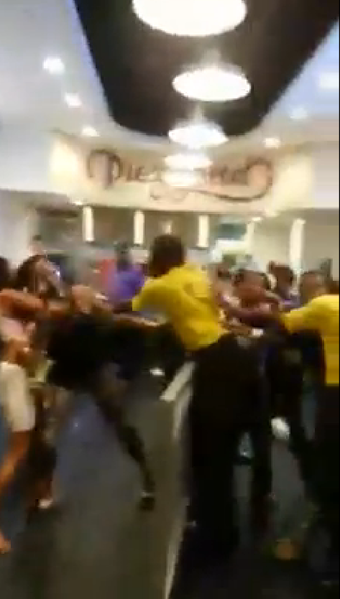 -At about 3 a.m. Saturday morning, a fight broke out at the Pie-Zetta restaurant at downtown's Horseshoe Casino, which opened its doors a week earlier. Kevin Forrest was there and posted a video of the melee on his Facebook page. In the video, the camera glances up from his pie—which looks pretty good, actually—to capture the rising hubbub, and delivers a classic line: "We got a casino, shorty. Only in Baltimore." You can see the women in the fight—one of whom apparently maced the other after a verbal argument got physical—being broken up by yellow-shirted security. The Sun edited the video and posted it to its website Saturday, including the concluding line, "The Baltimore Sun bought the video from Forrest for an undisclosed price." We're on record as saying the casino is a terrible idea, not because of the odd middle-of-the-night fistfight in the food court, but because gambling is a vice that preys especially on the poor and desperate, a point made very well in this Washington Post column by Petula Devorak. It's almost needless to say that the promised benefits to the South Baltimore communities have not come and almost certainly never will. This Labor Day weekend, we enjoyed the absence of the three-year Grand Prix boondoggle, but it seems we might have replaced it with a more permanent, much more damaging one. Yup, we got a casino, shorty. (Evan Serpick)

-If you read this paper, you should be saddened by the death of Charles Bowden this weekend, because he did what we do better and with more courage and more flair. Than anybody does. Bowden wrote numerous books about Juarez and Mexico's drug cartels, including "Down by the River: Drugs, Money, Murder, and Family," which details the cartel murder of the brother of an EL Paso DEA agent and earned him numerous death threats. In books such as "Blood Orchid: An Unnatural History of America" and "Blues for Cannibals" he took up the mantle of a wild desert prophet in a more reflective, furious prose. In "Blues for Cannibals" he wrote, "I am trapped in the great age of caution, of watch out, of fear. But I was blooded in the age of desire and lust and love," and offered us all a bit of passing advice:
"To start with, if I had my life to live over, I would never say no to a woman. And I would never skip a meal, not a single one. I would always eat the best food and price be damned. Just as I would drink good wines, or do without. And no spring would pass without planting, no fall without fat fires, no winter without black coffee in a dark room during the wait for the endless night to give way to dawn. To sleep in is a grievous sin. Also, I would do nothing purely for money, because every time I have done such a thing I have failed myself." (Baynard Woods)