No Trivia: The future of Baltimore club is getting sampled in a crappy J. Lo song

-A tragic optimism has taken over the Baltimore club scene these past couple of years. Everybody is finally getting pretty damned realistic about the possibility of a local producer or DJ blowing up properly and "making it," which is to say, we're all just painfully aware that it's probably never gonna happen. As a result, the music has become daring once again because it's got nothing to lose. Think: the supercut qualities of DJ AngelBaby mixes; the darkwave elements of Matic808; the post-whatever-you-got weirdness of Schwarz; James Nasty taking a hip-hop producer talent for sampling to club music and slicing slivers of past hits and refashioning them J. Dilla-style; Mighty Mark's futuristic ear bending club music back until it touches Detroit techno and ghettotech. I could go on.

All of this local energy makes something like TT The Artist getting sampled on a track by Jennifer Lopez just another sort-of-moment for the scene rather than something that'll announce Bmore club's imminent mainstream takeover, which has now been wrongly predicted dozens of times. In case you didn't know, Jennifer Lopez has a single out called 'Booty' and the hook samples TT The Artist from her song with Diplo and Swick, 'Dat a Freak.' Originally, 'Booty' featured Pitbull, but now there is a remixed version with Iggy Azalea and it has a "sexy" video released today. It's already racked up 6 million views and will surely be the talk of the internet for the next couple of days at least, which will make TT's voice one that lot of people hear whether they know they're hearing it or not. Good for TT. It will raise her profile and, presumably, send some dough her way, right?

But it also begs the question: Why wouldn't a label just go ahead and promote 'Dat a Freak'? Why swipe the catchy, fun part of another song and cram it into a weak-ass song in need of a hook? Well, superstars, especially ones in Jennifer Lopez's place, have a lot of money invested in them already and so it makes more sense to grab the hook from another song, give it to a corporation-like celebrity like J. Lo, and slap a few profitable stars (Pitbull, Iggy Azalea) on it and promote the living shit out of the hot-mess result.

There is a kind of nefarious trickle-down theory at work here, in which a local artist and their accompanying scene are supposed to be happy with this little bit of attention. In 2014, the best you can hope for is the record industry swooping down and stripping your talent for parts. Musicians are investments and the labels are trying their hardest to see a return on the stars they've already dumped lots of money into supporting, not the up-and-comer, no matter how pop-friendly or innovative they might be. This is why the radio is just the same dozen or so R&B-ers, pop-rappers, and pop stars all appearing on each other's songs. The fucking anointed ones. And sure, getting sampled by a very famous artist is better than not getting sampled by a very famous artist, but it would be nice if the industry didn't see the underground as somewhere to crib its moves from exclusively, and might at least deign to let some of these undergrounders through to play the mainstream game themselves. Clearly, their hooks are good enough.

-It is rare to find local musicians with an air of mystery about them, so tight-knit is the scene and all that, but Ryan Bair and Chrissy Vasquez remain delightfully out of reach. This is not internet-contrived "mystery," mind you. It's what happens when you combine a sturdy musical vision with a local musicians' relative lack of resources.

Last week, I was scanning everything and anything tagged "Baltimore" on Bandcamp, starting from the most recently released stuff, when I stumbled upon Ryan Bair's "Casting Away," a hyper-ambitious shred-metal epic of full of Yngwie Malmsteen-esque riffs, Slayer-like chug, and new-age music flourishes, released back in July. It turns out that Bair is just 15 fucking years old and lives in Sparks, Maryland??? Bair went and made the best Baltimore metal release of the year. No really, he did, please don't even try to argue with me. RIYL: the experimental shredding of Mick Barr projects like Ocrilim; Dragonforce; those chintzy Burzum records like "Daudi Baldrs"; RPG video game music. Who the fuck is this kid???

Yesterday, I passed through Wyman Park and saw "CHRISSY VASQUEZ" spraypainted real big on one of the park's walls. This afternoon, wandering through Station North, I spotted Vasquez's gorgeously crappy flyers for her excellent release, 'Sola'moor Demo' (one of my favorite releases from August). The flyers are printed out on basic white paper and they feature the album art, Vasquez's contact info below, and on the left, what looks like a personal photo of a young woman, presumably Vasquez. They look terrible in a transcendent "Tim and Eric Awesome Show, Great Job!" kind of way; and her name, spraypainted on the wall is on some "BIRD LIVES" or "CLAPTON IS GOD" type of shit. 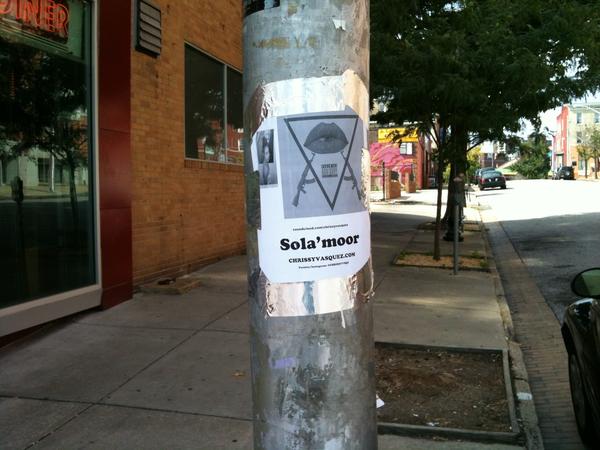 Assuming Vasquez is behind the graffiti as well as the flyers, she is developing a savvy D.I.Y. promo campaign with an air of art-school fuckery surrounding it. She's ostensibly a singer-songwriter, and though I've seen her perform a couple times now, it's tough to figure out what exactly she does. You'll hear trip-hop and hip-hop and freak folk and synth-pop and Sade and lots more in her songs but subgenre-mashing blah blah blah doesn't touch on the soulful classicism in her voice. So, start with the tweaked-out chipmunk soul of 'Dope Daddy', which sounds like a cut from a '60s girl group after they've been up for a three days straight listening to nothing but Nick Cave, and see if you can figure Vasquez's stuff out.