Art Fart: Seeing Matisse's 'Large Reclining Nude' at the BMA and on the street

As I meandered through the BMA last weekend, Matisse's 'Large Reclining Nude' gave me a momentary flutter, a fleeting familiarity. I stood in front of it for a few minutes, trying to determine why it caused such a sensation. Maybe it's the way the gridded background seems to hold that curving pink body in place, so that your eye constantly circles around, from the figure's foot, to her bent knee, across the elongated torso and then up her arm, which hangs over her head, down her shoulder and other arm. Or it could be the colors—the lump of the soft, Pink Pearl-eraser color against the deep blue, with the white grid lines crossing over it in a carefully clumsy way. But then I remembered Street Matisse.

I first started to notice the Street Matisse graffiti earlier this year, as I walked across the Howard Street bridge to go to our studio. I've seen it in other places in Station North and on the West Side, near the H&H building. Sometimes it's just the tag "Street Matisse" written in a kid-just-learning-cursive kind of way, and other times it's a rendition of a Matisse painting, like 'The Dance,' except one of the figures is on a skateboard and another raises a fist, with the words "POWER TO BALTIMORE!" above them. I've spotted just a handful of these pieces, and most have been painted over by now, including the one based on the 'Large Reclining Nude,' which had been on the side of The Place Lounge on Franklin Street. Technically it's still there, just painted over. 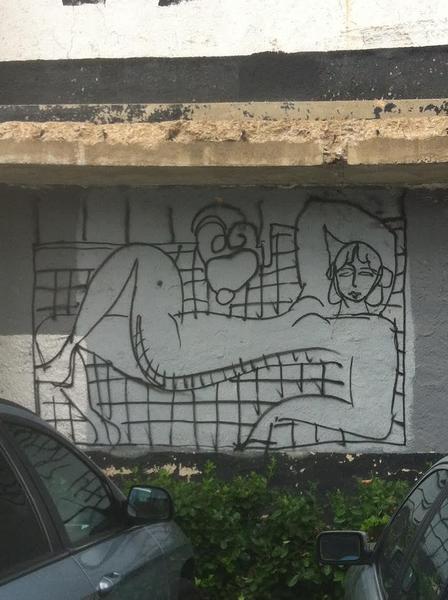 After leaving the BMA, I headed downtown to try and track down some of the Street Matisses where I'd spotted them before. It was a cold, gray day and I wandered for a couple hours near the Copycat, the Kagro building, past Artist & Craftsman, and eventually west on Franklin. I would've been surprised if the pieces were still there, because, obviously, graffiti gets painted over constantly—usually with a color that's slightly off, either because the sun hasn't worn it out yet or it's a different can of paint. As they get painted over and forgotten about, city walls and bridges and overpasses become like paintings whose previous layers and histories we only find out through the conservator's X-rays.

As I walked, I thought about how graffiti is sometimes honest and reactionary, sometimes cutting and clever—and sometimes, people use graffiti's anonymity as a shield to hide behind, as they spread hateful and threatening messages, which we've seen, most recently, in the racist graffiti found in an elevator on MICA's campus. I also thought about how graffiti shouldn't be precious or commodified. I like to believe no one starts doing graffiti hoping to become the next Banksy, who's almost a household name, and who makes a lot of money off his cutesy/ironic stencilled pieces and shows in galleries. Maybe Banksy's stuff was compelling before he became famous, but it's hard to imagine now, because when I think of him, I think of coffee-table books and tote bags with his imagery on them.

It's disheartening, especially if you are an artist, when you start to realize how the art market controls art making. In some cases, gallerists scoop up younger artists, sell their work for a lot of money, and then the artist gets pigeonholed. That's a big problem with gallery representation—though it can provide some financial stability for the artist, some gallerists discourage the artist from taking too many risks or changing their style, because it might not be as profitable. Museums also kind of have to play it safe because they're funded by big institutions and the government. They might not continue to get that money if they do something that the grantors dislike. That's why artist-run spaces are important, and funding for such spaces and unincorporated projects (hello, Grit Fund) are crucial. Because artists are supposed to be avant-garde and thought-provoking, and it's hard for them to challenge themselves if they feel beholden to a patron.

That Matisse painting, though, is in the BMA's Cone Collection, and we are unlikely to forget about it because it's in books, on the internet—because it's Henri Matisse. His economy of line and shape, incredible compositions, and loud color helped canonize him. But sometimes what really sticks with me is the stuff that's not manipulated by a market, that feels truthful, guttural, and honest. The stuff that catches my eye on the ground and walls, as I walk on my way to see the stuff in those bigger institutions. Power to Baltimore.

No one wants to hear it, but another COVID wave is here in Maryland