Over the past several months, groups of students, artists, and activists have been participating in Wikipedia "write-ins" or "edit-a-thons" at schools and museums all over the globe, volunteering to create new Wikipedia pages for women artists that have been largely erased from the popular art historical canon. Like nearly all secondary historical sources, Wikipedia is disproportionately written by and about men. The "edit-a-thon" is an attempt to correct history, which, through continuous neglect, has been arguably the most powerful tool used to suppress women's advancement. I spent last spring in Italy researching Renaissance and Baroque female artists whose work I had not been exposed to as an art student in the United States. When I returned to Baltimore, I learned that The Walters is actually home to some of these artists' paintings.

Of all the paintings in the Walters' 16th Century Italian Art gallery, only two are attributed to women: Sofonisba Anguissola (1532-1625) and Lavinia Fontana (1552-1614). Relatively speaking in the museum world, this is pretty good representation for female painters during the Renaissance—who did, in fact, exist. Virginia Woolf famously theorized that if Shakespeare had a sister of equal genius, she would have committed suicide before her talent was ever discovered, because women of her time—of Anguissola and Fontana's time—were barred from exercising and nurturing their genius. Anguissola and Fontana disprove this theory to an extent, though their success was obviously not without adversity. Both restricted their work primarily to portraiture because they did not have access, as did their male counterparts, to nude models and artist apprenticeships from which to learn full-figure and narrative painting.

During the Renaissance, a woman artist was considered a marvel or "virtuosa." Whenever her skill matched or surpassed a man's, she was deemed an exception from the laws of nature. Being a professional woman artist did, of course, require exceptional circumstances; in the case of Anguissola and Fontana, this meant doting parents and a nurturing environment.

Lavinia Fontana learned to paint from her father Prospero, also a painter, as well as her teacher, the famous Ludovico Caracci. Born in Bologna, she lived in the closest thing to a cultural center for female artists during the Renaissance. The city was home to the first recorded professional Italian female artist, St. Catherine de Vigri, patron saint of artists and against temptations (today her blackened corpse still sits upright in her cloister), as well as Properzia de Rossi, the first known female sculptor in Italy. Unlike most women at the time, Fontana had creative female role models, and most likely knew of Anguissola's work. She went on to serve in the papal court of Pope Paul V and the Bolognese gentry, creating court portraits as well as religious altarpieces.  Considered the first woman artist to work professionally within the same sphere as her male counterparts (i.e. outside of her home or cloister), she now has the largest surviving body of work produced by a woman artist prior to the 18th century. 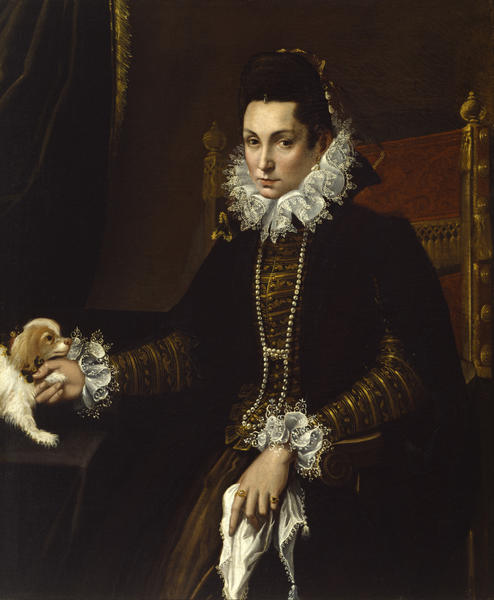 The 'Portrait of Ginevra Aldrovandi Hercolani' at The Walters, dated 1595, portrays the wife of a late Bolognese senator. Dressed in black mourning clothes, she holds a handkerchief in one hand to wipe her tears and holds the paw of a small dog—a symbol of loyalty and fidelity—with the other. The widow's austere gaze expresses a sense of strength, or at least composure. The focus on the sitter's psychology and the monumentality of the figure, illuminated against the dark, simplistic background, implies Fontana's awareness and understanding of humanist concepts and aesthetic theory. The ornamental detail and chiaroscuro (high contrast between light and dark) indicates the beginning of the Baroque style, though Fontana maintains the popular elegance of the preceding Mannerist period. The painting's accurate naturalism demonstrates her professionalism as a contemporary painter. She knew all the tricks, and could execute them better than many of her male contemporaries.

Anguissola became particularly popular among female patrons and served as court painter for Elizabeth of Valois, queen of Spain—making her the first Italian female artist to have an international career. Amilcare Anguissola provided his daughter and her many sisters with educations in place of expensive dowries, which he could not afford due to his unsuccessful entrepreneurial efforts. Sofonisba learned to capture human interaction and expression from painting her family. Her father sent a few of Sofonisba's drawings to Michelangelo, who responded with high praise. But despite her growing talent and reputation, Sofonisba's instructor, Bernardino Campi, received most of the credit and was praised for his creation of such a marvel. 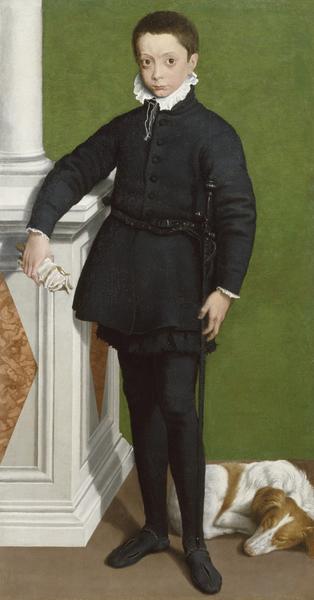 Her 'Portrait of Marquess Massimiliano Stampa' at The Walters was her first major commission, dated 1557. The subject, a young bug-eyed boy, looks about as happy to be standing for the portrait as any child would enjoy posing for a school picture today. He's no more enthused than the dog sleeping at his feet. At the same time, he appears somewhat anxious, leaning hesitantly against a stone pillar. Sofonisba could brilliantly capture the most subtle of expressions, especially those of children—experience gained from painting her lively sisters in her early work. Like Fontana's subject, 9-year-old Massimiliano Stampa is in mourning, though his all-black garb merely reflects the traditional dress of the Italian courts. The portrait commemorates the boy's inheritance of his deceased father's title. Her sympathetic treatment of the young subject demonstrates an understanding of children unmatched by her contemporaries, and, like Fontana, her grasp of human emotion reflects the interest in human psychology that pervaded the Renaissance.

Anguissola and Fontana are among the few fortunate creative women to have books and Wikipedia pages and articles like this telling their stories and examining their work, but there were incalculably more female artists alive during and even before the Renaissance who did not achieve fame, let alone the freedom to exercise their creativity and intelligence openly. And still today, their work is rarely considered outside of the field of feminist art history or ranked among their male contemporaries. Even after the valuable efforts of feminist scholars and Wikipedia volunteers, half of art history is still largely missing, in part because much of it was prevented from ever unfolding.