A much anticipated, transformed Lexington Market will reopen Monday, more than two years after the start of a long-planned, $45 million revitalization.

Baltimore officials have long sought to redevelop the iconic attraction, a key anchor of downtown’s west side and one of the country’s oldest public markets.

It’s been a tall order for the city and its selected developer, Seawall Development, to breathe new life into a historic gem beset by neglect and nearby open-air drug markets in a way that welcomes neighborhood residents and loyal regulars while appealing to tourists and a new generation of customers.

Two weeks before the first customers were expected to step into a new, light-filled shed-like structure with soaring black ceilings, officials were seeing the early results of their vision, one they say has benefited from years of community input. 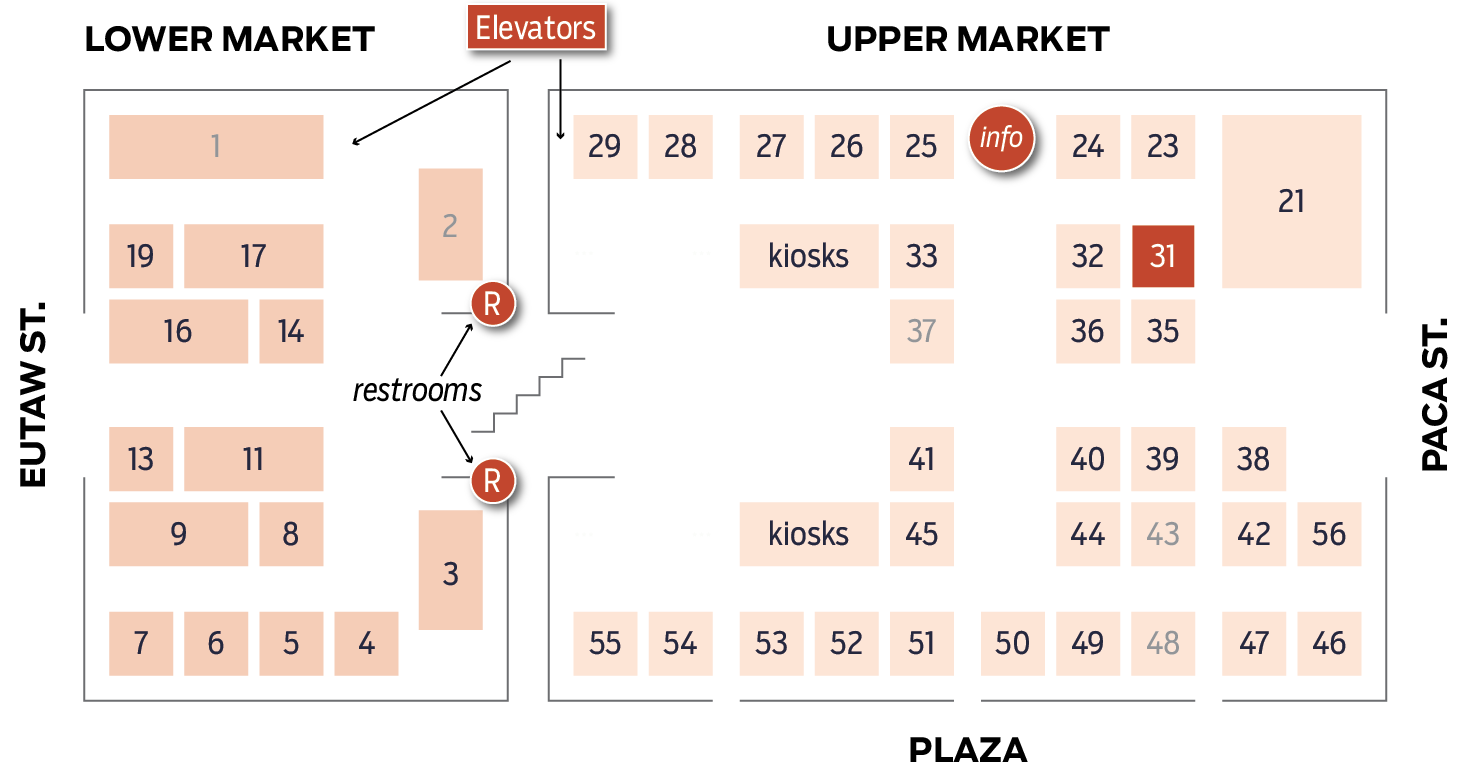 “We wanted everything to be informed by the city, by the larger community ... and that was for vendor recruitment, but it also affected what the building was going to look like,” said Jon Constable, a Seawall development manager. “We wanted an approachable market, a market that people come in — existing customers, new customers — and feel absolutely welcome. We want something for everybody.”

“Right now is that crazy rush to get as many people open as we can before we open the doors,” Constable added.

The soft opening set for 8 a.m. Monday begins an initial period with limited hours and numbers of merchants. About 10 permanent merchants and several temporary kiosks expect to open that first day, with more coming soon after.

Many of the merchants opening in the first phase are just getting into their new spaces, awaiting final permits, training staff and setting up equipment. Plans included assembling a critical mass of vendors for Monday’s opening.

The 38 merchants getting themselves in order include a blend of new and prior tenants, offering marketplace staples such as fresh produce, poultry, meat and seafood, and prepared breakfast, lunch and dinner.

Ashley Rock Wylie, a co-owner with her husband, Brandon, of Fleurs D’Ave, a florist on North Avenue, said they previously had no plans to expand. Then they heard a couple of years ago about the market redevelopment and put in a last-minute application.

“Both of us grew up going to Lexington Market, so the thought of it being a new one and that we could be a part, we were excited about that,” Rock Wylie said. “Hopefully, we’ll develop a different market base and will be able to be in front of all of the customers at Lexington Market, which is going to be a variety of people.”

Besides the florist, there’s a coffee roaster, a doughnut shop, a shoe repair stand and delicatessens. A candy maker, Betty Lee’s Candy Dish, is new, while Market Bakery returns, with founders handing the family business down to their son-in-law. Other cuisine includes Afro-inspired, Chinese, Malaysian and vegan, as well as traditional offerings such as burgers, tacos, and chicken and waffles. Additional vendors have signed up to rent some of the dozen short-term carts that will be sprinkled around the building.

“We’re excited for Lexington Market because it brings everything residents want,” said Andrew Hinton, president of the City Center Residents Association, which represents downtown neighborhoods, including the area around Lexington Market.

Hinton said he is especially looking forward to more food and dining options and more events.

Cherrie Woods, spokesperson for Baltimore Public Markets, which manages the market for the city, said she sees a revitalized Lexington Market serving as a hub — not just for food, but for arts and culture and other events. An outpost of the Baltimore Museum of Art, for instance, will return to the market with a gallery and community programming center.

Woods said she sees the market as a gathering space where Baltimoreans can enjoy complete meals or gather the ingredients to create their own.

“It’s important that we have both fresh and prepared food ... available for the surrounding communities,” she said. “We want that thriving market environment and we want to broaden the customer base so that everyone feels comfortable coming to the market.”

Vendors might find themselves with an even bigger-than-expected customer base, thanks to an Oct. 17 announcement that the Maryland Department of Health plans in 2024 to move its headquarters and about 1,200 workers to a long-vacant complex near the market, a former Social Security Administration building on North Greene Street known as Metro West. The deal is awaiting state Board of Public Works approval.

The new South Market, between Eutaw and Paca streets, was constructed on a former parking lot next to the old location. A plaza with picnic tables and native plants was built on the former site of the Arcade Building, a 1980s addition that was demolished recently.

The market’s East Building, previously home to most of the vendors, closed permanently Sept. 3. The city owns the market buildings, including the East Building, which will become an office for the city Parking Authority this spring and has space as well for the public markets staff, Woods said.

The new Lexington Market pays tribute to the old Shed Building, an early 20th-century version of the market that was destroyed by fire in 1949.

Gleaming stalls stretch side by side in a way that allows sightlines from one end of the building to the other. Merchants who prepare and serve hot meals line the perimeter. No two stalls look alike. Each merchant helped create a design reflecting their business, choosing color schemes, signage, lighting fixtures and countertop and wall finishes.

A mural of photographs of the old market dominates a wall on one end of the market, while the well-known, oversized sign reading “World Famous Lexington Market Since 1782″ hangs over a glassy entrance at the other end. It was removed from the Arcade Building before it was demolished.

The Baltimore Room, a space designed for market seating and special events, overlooks Eutaw Street. Steps leading to a lower market area include a stadium seating area expected to become a gathering spot.

The building will be home to 19 previous Lexington Market merchants, including the popular Faidley’s Seafood, which is staying at its current spot on Paca Street in the otherwise closed East Market through the end of the year while its space in the South Market is built out.

Lots of buzz, and questions, too

Jane Lim, owner of Ronny’s Combo, which served all-day breakfast and lunch at the old market for about four decades, shut down her old location in early September. She faced licensing and inspection delays and had to wait longer than expected to prepare the new stall and train staff in new technology. But the relocated Ronny’s has since been inspected and certified and is ready to go.

Lim said she has looked forward to finally being in a new market she has heard about for years. Her family long planned such a move, ever since they bought Ronny’s, then a three-decade old business, about nine years ago. She hopes the gleaming new facility will lead to an improved, safer reputation for the market.

“I’m very confident and hope to bring more business to the market,” she said.

The vendor selection process started at the end of 2018 and included community town hall meetings. The goal was to increase the variety of offerings and maintain affordability, increase diversity of merchant ownership, and end up with merchants that had connections to the city, said Peter DiPrinzio, Seawall’s director of food and beverage development. The city got more than 400 applications for the current configuration of 48 permanent spaces, and 45 are leased.

“The reception from the vendors and their excitement has been really amazing,” DiPrinzio said. “The buzz across the city of Baltimore we’ve been energized by.”

“On the flip side ... there’s still this question as to what role the city is going to play in helping make the new market a safe and welcoming destination,” he said, and whether police will step up enforcement to deter drug markets and violence in the area.

“It’s not to say that people won’t come, but will it be all the customers that could come if it were to feel like a safe and welcoming and family friendly place?”

Daily
Get your evening news in your e-mail inbox. Get all the top news and sports from the baltimoresun.com.

He would like to see improved pedestrian access to the market, with better lighting, more planters or trees, cleaner sidewalks and more security patrols.

Mayor Brandon Scott said Wednesday that areas around the market historically have been places in need of “robust deployment” from the Baltimore Police Department, which he said will continue. Recently, he said, police have made numerous gun arrests in the area.

“We’re going to continue to push anybody who’s doing illegal activity to be uncomfortable there and hold them accountable, handing them over to the other parts of the justice system,” Scott said.

On Oct. 10, on the new market’s lower level, Total Health Center manager Aneesa Hosein arranged health products and vitamins, such as the popular “All in one Master Tonic,” in a pop-up space where the shop will operate until its permanent stall is ready. The business operated for several decades in the East Building.

“We come from the old market, and something as big as the new market and so grand, after so long — change is good,” Hosein said.