The Baltimore Sun’s readers and staff scoured the region for the best activities and entertainment, from art galleries to wedding venues.

First, you’ll find critics’ picks from The Sun’s editorial team — whom we recommend and why. 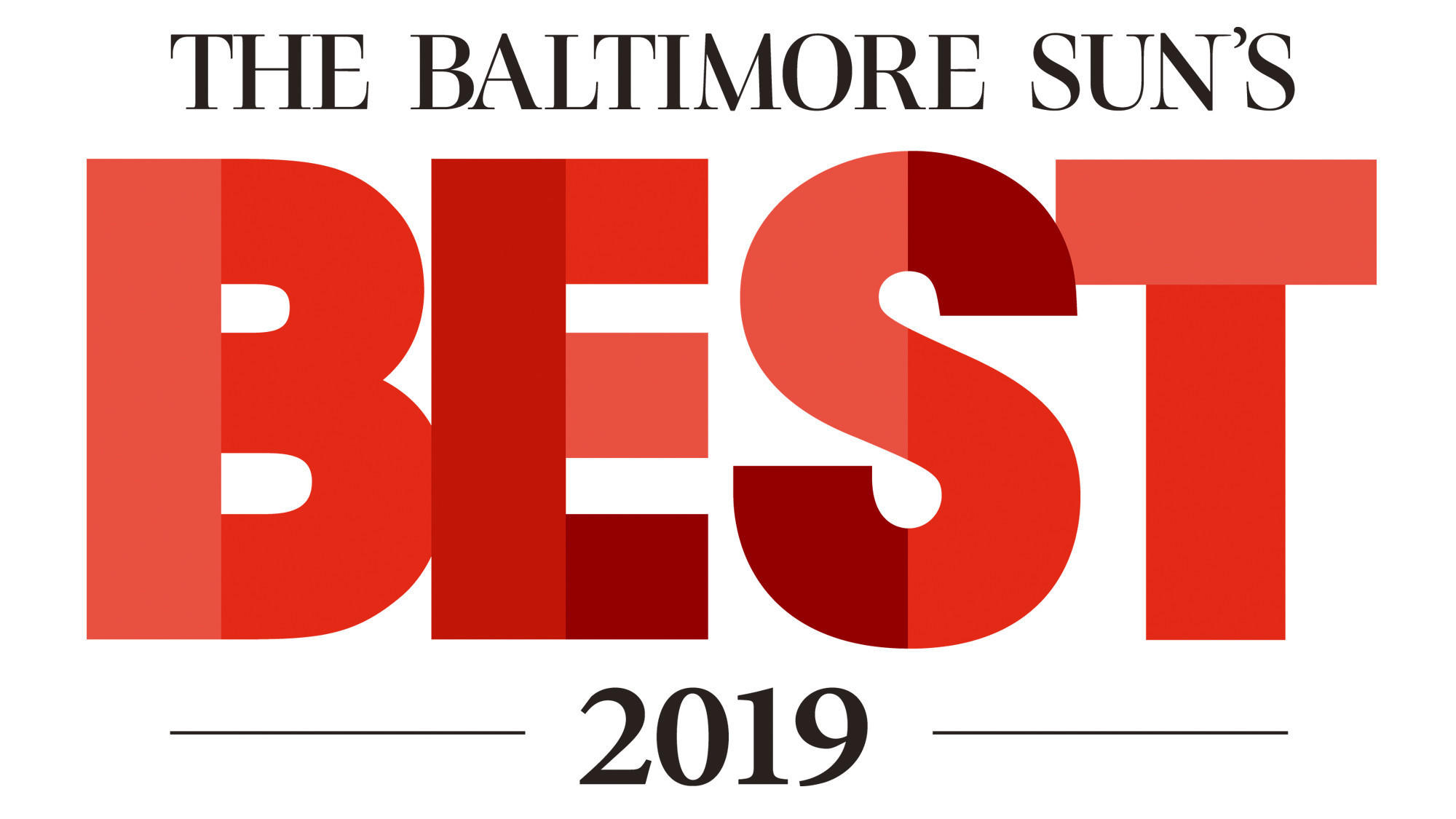 On a blustery and bone-chilling Saturday in late winter, Station North’s Graffiti Alley was popping. A young woman in a sleeveless red lace dress, stilettos and bare legs leaned out of a doorway, shivering between shots for a prom photo. A veteran tagger demonstrated his technique to a wide-eyed boy. Artists took selfies standing before their creations. Even a pair of middle-aged tourists stopped to gawk.

A dozen years ago, the alley was a bleak, needle-strewn haven for drug addicts behind the Load of Fun arts center (now Motor House). It has been transformed into what describes as “the only legal art space in the city where street artists can create their work freely.” The tourism group has named the alley Baltimore’s most Instagrammable place — ahead of the Washington Monument.

Walking into the tucked-away, L-shaped alley is like entering a medieval cathedral. There’s the same explosion of color and similar iconography. It’s not uncommon to find an “angel” with or without wings (a portrait of a deceased graffiti artist) painted on a wall with consummate care.

Moreover, the artists police themselves. You won’t find obscenities, gang tags or racial slurs, or — rare for a Baltimore alley — trash.

Driving I-95 during rush hour is a terrible price to pay for going anywhere. But the express lanes, allowing drivers to zip between the I-895 interchange and White Marsh Boulevard, let you avoid much of the clog. So why aren’t more people using them? Sure, paying a toll is brutal, but trust us — it’ll be the best 49 cents to $1.54 (with EZPass) you ever spent.

Sure, superstar artist Mark Bradford launched a silk-screening workshop with the Baltimore Museum of Art at the Greenmount West Community Center, where at-risk kids create T-shirts and totes for sale. But this center offers much more: a podcast, a youth business program, digital lab and robotics seminar. The center is overseen by its fiercely dedicated executive director, Kisha Webster.

A final resting place for Baltimoreans since 1839 (with more than 65,000 permanent residents), Green Mount’s 60 acres are some of the city’s most beautiful, and certainly spiritual locations — a peaceful, landscaped oasis in the middle of town, filled with Gothic and Victorian-era architecture, statuary spanning generations and the sort of rolling topography that long-ago disappeared from much of Baltimore.

Feel free to wander about at your own pace, or take advantage of the $20 walking tours offered Saturday mornings in spring (9:30 a.m. April 27, May 11 and 25, June 8) and fall by local historian Wayne Schaumburg.

There was supposed to be just one performance only on March 25, 1958. But 60 years later, the celebrated Alvin Ailey American Dance Theater stops in Baltimore for two shows April 23 and 24 during its nationwide anniversary tour. Highlights will include “Lazarus,” the troupe’s first two-act ballet, and the iconic “Revelations” inspired by Ailey’s Texas childhood.

When a rare copy of the collected edition of William Shakespeare’s plays (the “First Folio”) was loaned to Maryland in 2016, it didn’t go on view at Baltimore’s George Peabody Library. Nor did an exhibit of roughly 40 of the virtuoso woodblock prints and engravings by the German Renaissance master Albrecht Durer hang with the Walters Art Museum’s collection of old masters.

To spend quality time with these treasures, culture lovers had to venture onto the St. John’s College campus in Annapolis. The nationally accredited Mitchell Gallery may lack the resources of Maryland’s cultural powerhouses, but the four traveling exhibits that the Mitchell hosts annually (in addition to shows by regional artists) would make any art lover’s bucket list.

Works by such celebrated painters and sculptors as Rembrandt van Rijn, Alexander Calder and Pieter Bruegel the Elder have been on view at the Mitchell. One exhibit this year featured 100 years of classic children’s book illustrations. An original drawing of “The Cat in the Hat” by Dr. Seuss (Theodor Geisel) captivated — and temporarily stilled — a troop of wiggly 6-year-old Cub Scouts last fall.

Best of all, the Mitchell’s exhibits are free.

It’s the nation’s largest free arts festival — what more do you need to know? Gaze at the artwork, listen to the music, watch a performance or two. OK, you’ll need money for food and if you decide to buy any of that art, but Artscape is still the best deal in every Baltimore summer. Set for July 19-21 this year.

Even without Francis Scott Key and those rockets glaring red, this would be a national treasure. Don’t miss the giant statue of Orpheus, the lump-in-your-throat moment when the visitors center curtain rises and you get your first look at that giant flag, and a walk along the harbor that’s unparalleled. Glorious.

There will be 32 performances in Baltimore of the national tour of the smash rap musical about the life of founding father Alexander Hamilton as it is performed by a multi-cultural cast. Lin-Manuel Miranda’s musical will be mounted in the former 1914 vaudeville palace, which has a capacity of roughly 2,300 seats. Therefore, 73,600 tickets, give or take, will be available during the four-week run. (Subscribers get first shot.) And the number of people vying for those tickets could approach 2,710,489, or the 2010 population of the seven-county Central Maryland Metropolitan Statistical Area.

Tickets will go on sale to the public at an as-yet undisclosed date this spring, and Hippodrome officials aren’t saying yet how much seats will cost. Even if you can’t snap one up, don’t despair; the same online lottery that has operated in other cities will be held in Baltimore. A Hippodrome official said last year that 20 pairs of discounted tickets will be distributed before each performance. In other markets where “Hamilton” has appeared, those seats have been priced at $10 apiece.

So much to savor at the BMA, from Rodin’s “The Thinker” to Matisse’s “Purple Robe and Anemones” to Wangechi Mutu’s “Water Woman” sculpture. Plus you get to walk up those stairs to the magnificent entrance designed by John Russell Pope, enjoy a meal at Gertrude’s and meander through the city’s classiest gift shop. Don’t miss the surrealist “Monsters & Myths” exhibit, up through May 26.

Flicks from the Hill

Organizers of the beloved Little Italy outdoor festival have said it’ll return in 2019 after a one-year hiatus, but until we can scope out its new location, we’ll go with this wondrous summer experience: movies you can watch for free from Federal Hill Park, projected onto the side of the American Visionary Art Museum.

Place to take the kids

Port Discovery has been enriching Baltimore kids for roughly 40 years — the first 20 at the Cloisters, the last 20 in the old Fish Market building near Power Plant Live. It’s always been a source of entertainment, education and wonder, offering everything from STEM workshops to Curious George.

So we were a little nervous when it largely shut down in January to prepare a new Port Exhibit — why tamper with such success? But the plans look so cool (and include a massive ship’s prowl that will make kids feel like the captain of their own vessel) we were hooked immediately.

Museum president and CEO Bryn Parchman promises a “bigger, better, bolder Port Discovery,” one that will be intrinsically Baltimore. “We wanted something that pays homage to the industry of the port that was here even before the city was,” she says.

Happily, even with all the construction, the museum is keeping kids entertained and engaged, thanks to The Construction Zone in the Atrium, focusing on “design, building, engineering and creativity” (which folks can take advantage of on weekends for a reduced-price admission of $5), as well as a free Pop-Up Play Space at The Shops at Kenilworth in Towson.

But when that new Port opens in late May or early June (an exact date has yet to be announced) — well, is there a maximum age for taking the helm of that ship? Because if not, we’re there!

Since 2013, the President’s Reading Series has brought such prominent international writers to campus as Salman Rushdie and Zadie . This year’s lineup was particularly outstanding, featuring such literary stars as Colson Whitehead,Paul Beatty and Lorrie Moore. Will your favorite author visit Baltimore next year? He will if he’s Ian McEwan.

The bucolic stretch between Reisterstown and Falls roads in Baltimore County winds past grazing horses, the Stevenson University campus, a home modeled after a Frank Lloyd Wright masterpiece and a gray stone church with a bright red door. Watch leaves bud and then drop, or stop by the side of the road to measure your height against stalks of corn.

More than a quarter-century old, and still the country’s best ballpark. Fans from all over come to B-more to savor its mix of old-school charm and modern amenities (a mix plenty of other ballparks have tried to emulate, with middling results). The warehouse alone makes OPACY a distinctive gem. The O’s fortunes may have waned, but their ballpark remains a winner nonpareil.

View of the city

People have been savoring this view of Baltimore since before there even was a Baltimore, and who are we to buck such longstanding tradition? The view of the skyline is unsurpassed, and the park that preserves it includes 19th-century cannons, statues of War of 1812 heroes and a play area for the kids. Next time a tall ship sails into port, this is where you’ll want to watch.

If Robin Hood and Maid Marian were getting married in 21st-century Baltimore, they’d feel right at home at The Cloisters, a medieval castle on a hilltop just outside the city.

OK, it’s not exactly medieval, built from 1929 to 1932 by the president of an ornamental iron work company and his writer wife, but it sure looks it, complete with stone towers, heavy wooden doors, stained-glass windows (including one that’s an estimated 800 years old) and even an adjacent windmill.

Turn off Falls Road, wind your way up the tree-shrouded half-mile-plus driveway, and The Cloisters appears as if Friar Tuck himself might come out to greet you. Its builders, Samuel A. and G. Dudrea Parker, imported pieces from all over Europe to help their home invoke centuries long-past.

Weddings here — and they only book one event a day, so there’s never a rush to clear out in time for the next wave of guests — can take advantage of three floors of rooms, a covered outdoor walkway that makes for a glorious processional, an outdoor plaza perfect for group photographs, fireplaces enough to ward off any winter chill (and look awfully romantic doing it), even a timeworn garden bell that tradition dictates should be rung for good luck.

Hey, this place was good enough for Will Smith and Jada Pinkett when they got married, which counts for plenty.